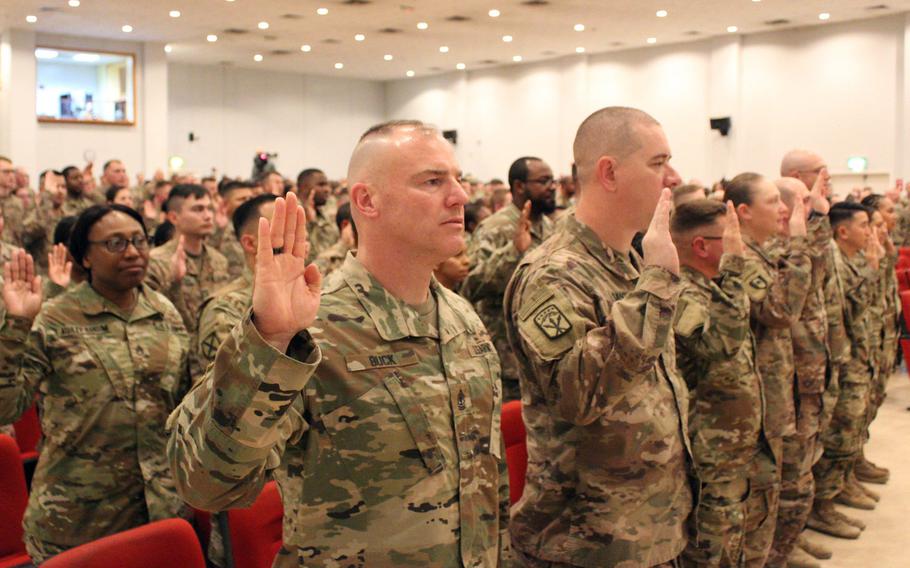 First Sgt. Joseph N. Buck Jr., 1173rd Deployment and Distribution Support Battalion, 595th Transportation Brigade, recites the noncommissioned officer creed alongside other soldiers during an NCO induction ceremony at Camp Arifjan, Kuwait, Feb. 9, 2019. Many NCOs, primarily in the ranks from staff sergeant through master sergeant, will be able to rank their desired next assignments under a new program. (Jordan M. Rose/U.S. Army)

Noncommissioned officers will get to rank their assignments by choice for the first time when the Army rolls out a new preference system next month.

The newly introduced Assignment Satisfaction Key—Enlisted Module applies primarily to NCOs eligible in the ranks of staff sergeant through master sergeant for the 2021 enlisted manning cycle, the Army’s Human Resources Command said in a statement earlier this month.

While officers have had a similar system of ranked choices in place since 2016, this is the first time it has been introduced for NCO ranks. It will allow them more input into where they would like to be assigned based on their knowledge, skills and preferences, HRC said.

The new system was preceded by two pilot programs in June and September involving a total of 1,700 NCOs.

“Seventy one percent of the NCOs participated in the (pilot) process and 55 percent received one of their top five choices,” Col. Bryan Harris, armor enlisted branch chief at HRC, said in the statement.

In early October, thousands of enlisted soldiers received an email from the command, letting them know they will be participating in ASK-EM, which will support interaction between the soldiers and their branch talent managers.

Soldiers may enter the site as many times as they like during the roughly 30 days the marketplace is currently set to remain open. While soldiers’ choices will be considered, the Army’s readiness requirements ultimately will remain a priority in determining assignments, HRC said.

Promotable E-5s will only be included by Army branches based on the number of available E-6 slots they have. If a branch is short of E-6s during a specific manning cycle, they will be allowed to open the marketplace to their promotable E-5s.

ASK-EM will cover five enlisted manning cycles per year, compared with just two for officers, allowing eventually for up to 35,000 NCOs to participate, the HRC statement said.

There were no plans announced to open the system to junior enlisted ranks.

Harris urged all NCOs to take advantage of the new assignment system.

“If they don’t speak up, their assignment manager will reassign them in accordance with priorities and the needs of the Army,” he said in the statement. “Don’t miss out on the opportunity to influence your future.”