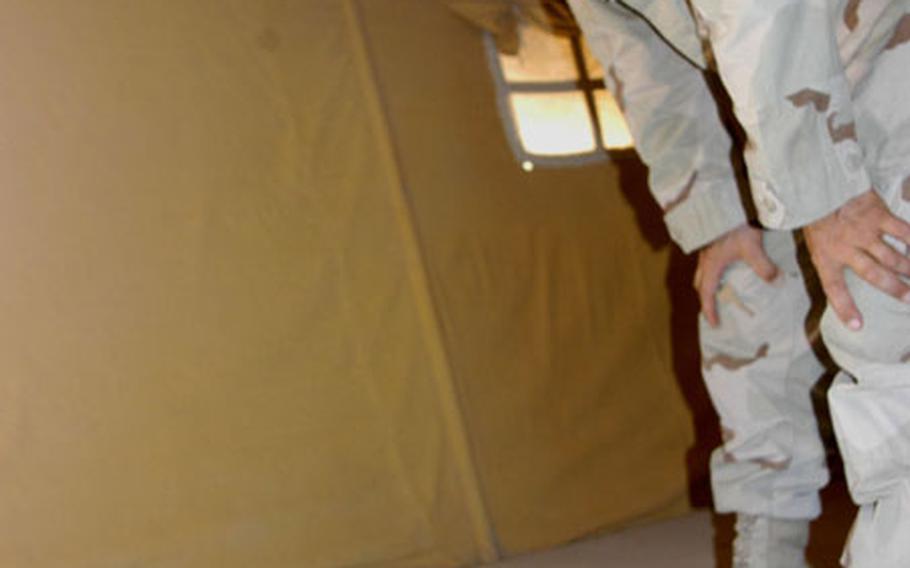 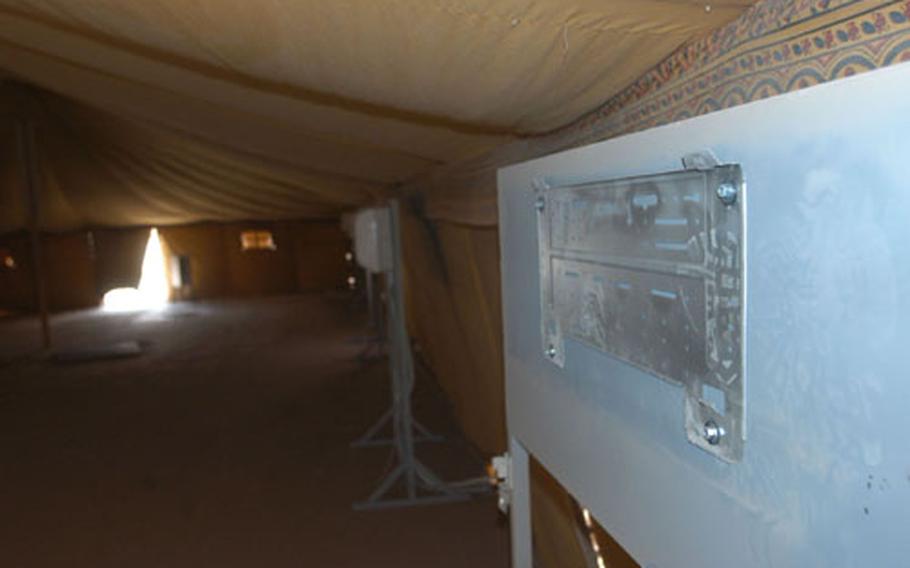 The mount for an air conditioner sits empty after a previous tenant at Camp Virginia, Kuwait, made off with it. (Juliana Gittler / S&S)

The clusters of tents that make up Camp Virginia in Kuwait serve as a giant motel for thousands of soldiers on their way north to Iraq or south home.

The sprawling camp, and others like it, serve as transitional points for U.S. troops. There are about 160,000 U.S. troops currently in Iraq and most have spent some time in camps like Virginia.

Noncommissioned officers are filling officer slots and everyone else is doing something far from their training.

The officer in charge at the front desk is a staff sergeant who&#8217;s usually a military police officer.

Sgt. Michael Trapp, 27, is a mechanic. He&#8217;s serving as fire marshal. He learned the job from the former marshal in a few days.

The job is stressful &#8212; units passing through have tampered with electrical boxes to add power outlets and air conditioning to their tents. The result is leavinga wiry mess and a fire hazard.

The mayor&#8217;s cell includes soldiers from three units: National Guardsmen from the 185th Rear Operations Center from Iowa, including Hof; mechanics like Gross and Trapp from the 183rd Maintenance Company from Ft. Carlson, Colo.; and the mayor, Lt. Col. Byrd, comes from the 139th Rear Operations Center. He&#8217;s also a Guardsman and works at a crime lab in North Carolina for the state&#8217;s Bureau of Investigation.

The mayor&#8217;s cell switch occurred when the Army shifted control for the camps from V Corps to Army Forces Central Command-Kuwait and the 377th Theater Support Command.

The cell is responsible for housing, feeding and protecting the troops coming and going.

One of the biggest challenges, besides learning a new job on the fly, is keeping track of what they have, Hof said. Air-conditioning units have vanished as units head north to less-than-steller conditions.

The camp is made up of tent pads and can hold up to 12,000 people. About 3,000 call it home now. As units start to return from Iraq, they&#8217;ll stay at camps similar to Virginia before heading home, so the work will intensify. Mayor&#8217;s cells have had a two-month turnover in the past, but that could change. Current cell members have no idea how long they will be performing foreign jobs.