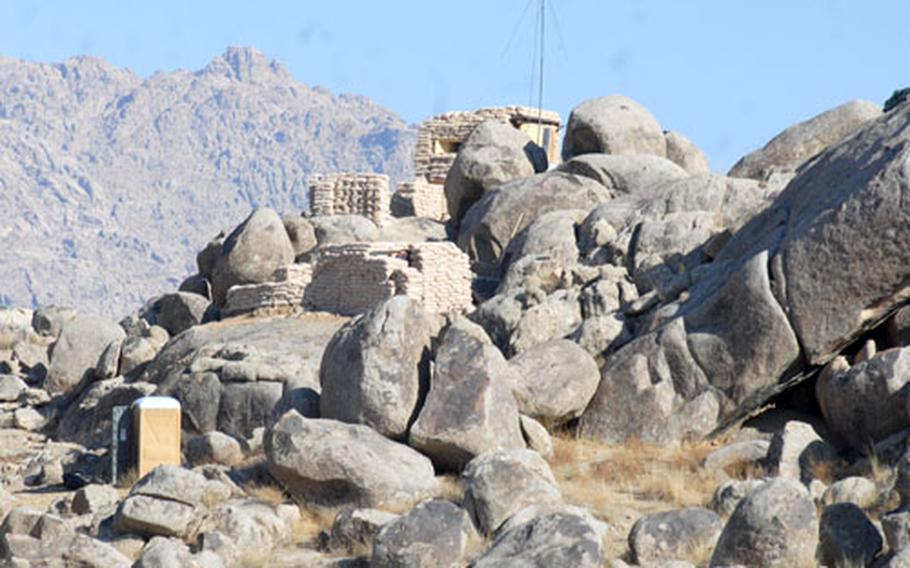 The rock guard, a defensive position at Forward Operating Base Baylough in southern Afghanistan, overlooks several ridgelines, orchards, farmhouses and a small creek. During a firefight there, Staff Sgt. Matthew Ritenour continued to direct troops after being shot in the head. (By Seth Robson / S&S)

The rock guard, a defensive position at Forward Operating Base Baylough in southern Afghanistan, overlooks several ridgelines, orchards, farmhouses and a small creek. During a firefight there, Staff Sgt. Matthew Ritenour continued to direct troops after being shot in the head. (By Seth Robson / S&S) Sgt. Dustin Sutton (left), 32, of Mesquite, Texas and Cpl. Jeffrey Treaster, 33, of Harrisburg, Pa., take a break at the rock guard, a defensive position at Forward Operating Base Baylough. They were in a firefight there in which Staff Sgt. Matthew Ritenour continued to direct troops after being shot in the head. (Seth Robson / S&S)

DEY CHOPAN DISTRICT, Afghanistan &#8212; A noncommissioned officer who led troops in battle for more than an hour despite a bullet wound to the head that left him partially paralyzed has been recommended for the Silver Star Medal.

Staff Sgt. Matthew Ritenour of 2nd Platoon, Company A, 1st Battalion, 4th Infantry Regiment, based in Hohenfels, Germany, was in charge of soldiers manning the &#8220;rock guard&#8221; when Taliban attacked the base on Sept. 4.

The rock guard is a pile of massive boulders, some as large as houses, overlooking a series of ridgelines, orchards and farmhouses and a small stream to the north and west of the base. It&#8217;s a vital defensive position at Forward Operating Base Baylough in southern Afghanistan&#8217;s Dey Chopan district in Zabul province.

The day before the attack, soldiers manning the rock guard reported dozens of vehicles arriving at outlying villages as the Taliban moved into position.

When the attack started with incoming rockets, mortar rounds and heavy machine-gun fire, Pfc. Jason Byrd, 23, of Greensburg, Pa., a medic, recalled running toward the rock guard to get into a defensive position. Soldiers had to run down a staircase made of old ammunition containers that was a magnet for enemy fire, he said.

&#8220;A soldier was at the top of the steps and called for covering fire. I saw the rounds hitting all around him. I didn&#8217;t think he was going to make it down the stairs but he did. It seemed like a suicide mission,&#8221; Byrd said.

Two soldiers were shot in the wrist by a burst of enemy fire.

NCO is downThen Ritenour, 32, who was checking on his soldiers, ran up the stairs and was struck by a round that penetrated his Kevlar helmet.

Byrd and another soldier dragged the NCO to cover and started treating the wound, which was bleeding heavily.

As Ritenour lay on the ground in shock, other soldiers became confused and communication began to break down. Then they heard that a friendly observation post overlooking the forward operating base was in enemy hands, Byrd said.

&#8220;I gave Ritenour the radio and said, &#8216;Your soldiers need you.&#8217; He just snapped to it even though he was half-paralyzed and couldn&#8217;t move. He had me hold the map in front of his face and started calling for fire from the mortars and calling out to the guys to see if they were OK. He was running the position like he was supposed to, even though he couldn&#8217;t get up and move around,&#8221; he said.

Ritenour refused to be evacuated by medevac helicopter to an aid station and continued to lead the defense of the rock guard for more than an hour, until airstrikes hit the insurgents, Byrd said.

Sgt. 1st Class Russell Johnson, 32, of Cumberland, Va., said the attack on the rock guard was probably an attempt to breach the wire there and use the rocks as cover to attack the rest of the FOB.

&#8220;But our men traded machine-gun fire with the enemy so they could get into their positions and fight,&#8221; he said.

It was 45 minutes before jets arrived to drop 500-pound bombs on enemy positions 500 meters from the rock guard. But some enemy fighters were as close as 75 meters and more were taking cover in a creek bed.

On the other side of the FOB, the Taliban overran an Afghan National Police observation post at the top of a nearby mountain with a clear view of the American positions.

The Taliban destroyed a Zeus anti-aircraft weapon at the outpost and captured an 82 mm recoilless rifle but the Americans responded by peppering them, from more than a kilometer away, with .50-caliber sniper fire and dropping mortar rounds on the outpost, which soon caught fire. The ANP reported four Taliban bodies in the outpost when they returned.

Sgt. Ferdinand Morris, 34, of Bethany, Okla., ferried ammunition to the rock guard and mortar pit during the battle and helped evacuate casualties to the FOB&#8217;s landing zone.

Ritenour is recuperating at his parents&#8217; house in Chicago with his wife and daughter. He recently spoke to his 2nd Platoon comrades over the phone, telling them he&#8217;s got movement back in his right arm and is starting to walk with a cane.

The Silver Star, for which Ritenour has been nominated, is given for gallantry in action while engaged in combat against an enemy or serving in combat with friendly foreign forces. It is the seventh highest U.S. military decoration.

Six other soldiers involved in the battle have been recommended for the Army Commendation Medal with V device.