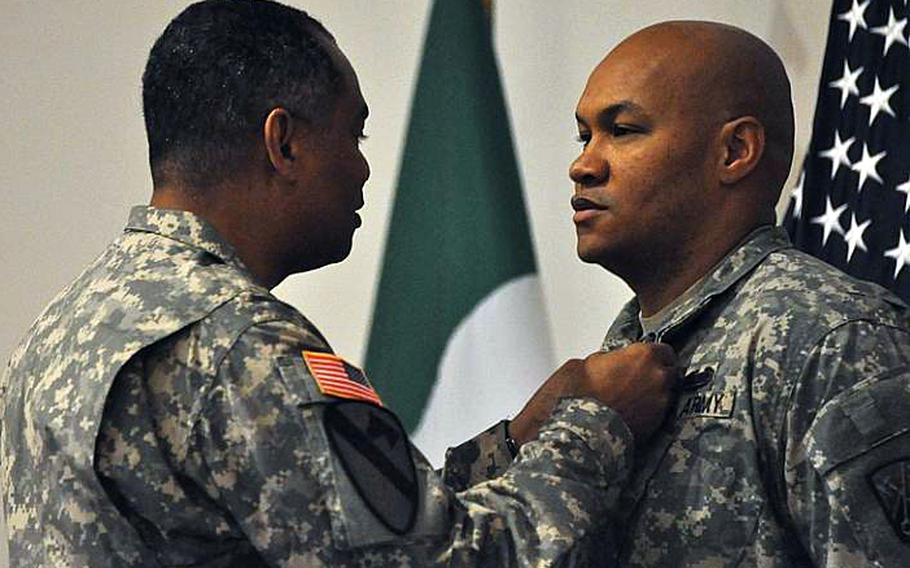 VICENZA, Italy &mdash; Army combat training and a commitment to defend the people of the United States in or out of uniform served Staff Sgt. Eddie Peoples well when he took down a bank robber while on leave in Florida last year. It earned him a Soldier&rsquo;s Medal on Tuesday for noncombat valor.

Peoples, who has served five tours in Iraq and Kuwait during his 11-year Army career, displayed &ldquo;extreme personal courage while in grave danger,&rdquo; said Brig. Gen. Aundre Piggee, commander of the 21st Theater Sustainment Command, who presented the award. Peoples is a member of the 386th Movement Control Team, 39th Transportation Battalion, which falls under the 21st TSC umbrella, based in Vicenza.

On May 31, Peoples, accompanied by his sons Ikika, 7, and Kioni, 5, was in a Bank of America branch in Sarasota, Fla.,when a man entered, waved a handgun and said he was robbing the branch.

That silenced just about everybody in the bank but the soldier&rsquo;s children, who giggled, Peoples said after the ceremony at Caserma Ederle where he was presented the Soldier&rsquo;s Medal &mdash; the service&rsquo;s highest honor for acts of valor outside combat.

Their giggles got the attention of the would-be robber, Peoples said, who pointed his gun in their direction. Peoples moved to stand between his sons and the man and kept himself between them while the man demanded money from the bank.

When the man left, Peoples followed him outside.

That decision, Piggee said, is not one most people would make.

Peoples said that even though he was off duty and not wearing his uniform, he felt an obligation.

&ldquo;It&rsquo;s never someone else&rsquo;s problem when you&rsquo;re in the U.S. Army,&rdquo; he said. &ldquo;We are the sworn defenders of the United States people and I take my oath very seriously.&rdquo;

Peoples got in his rented van and put it between the gunman&rsquo;s vehicle and the exit. After ramming Peoples&rsquo; vehicle several times, the gunman got out and approached Peoples, gun drawn.

Peoples said it wasn&rsquo;t the first time he&rsquo;d had someone point a gun at him, citing his time in Iraq. He grabbed the gunman&rsquo;s wrist and disarmed him, Peoples said, forced him to the ground and held him there until authorities arrived.

&ldquo;I would certainly not encourage everyone to do what he did,&rdquo; Piggee said. &ldquo;The result would not be the same. But he made the right call that day. And we appreciate him. I&rsquo;m sure the other people in the bank appreciated it as well.&rdquo;

Peoples said he doesn&rsquo;t think he did anything any of the soldiers waiting in the post theater to congratulate him would not have done. He said he used &ldquo;Army combat training&rdquo; to take down the gunman.

That, he said, may give pause to other would-be criminals.

&ldquo;Because that person on their left or on their right could be in the military or retired from the military. &hellip;&rdquo;

Peoples said he hopes the next trip to Florida doesn&rsquo;t remind him of a combat tour. So does his wife, Abra, he said.

&ldquo;She said, &lsquo;Only you could be on leave and find yourself in armed combat,&rsquo; &rdquo; Peoples said with a smile.

CORRECTION: The original version of this story misidentified Staff Sgt. Eddie Peoples&rsquo; unit, which was incorrectly cited during a Soldier&rsquo;s Medal ceremony. He is a member of the 386th Movement Control Team, 39th Transportation Battalion.