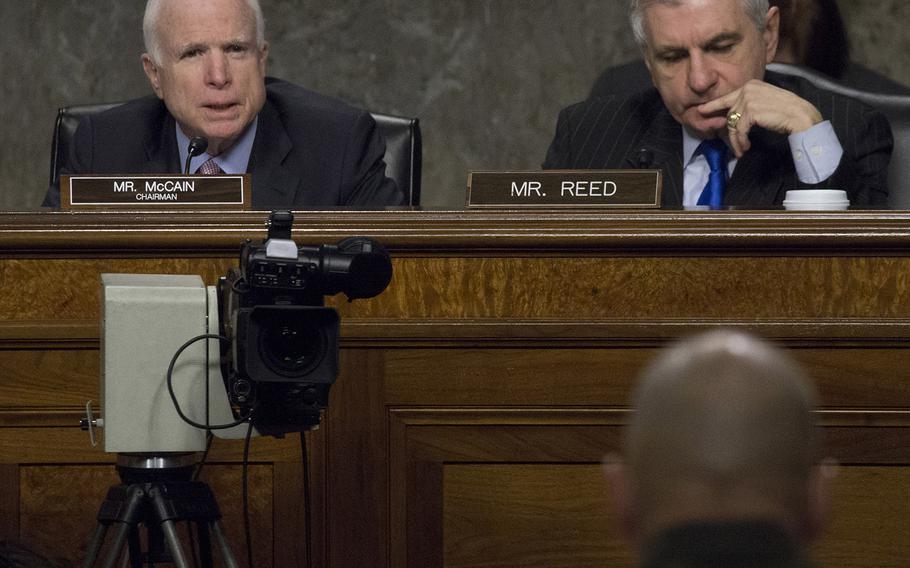 WASHINGTON – The Naval Criminal Investigative Service confirmed Friday its probe into nude photo sharing on the Marines United Facebook page has expanded to other sites on the Internet and said it has now identified about 20 victims.

Curtis Evans, an NCIS division chief, said he did not divulge how many sites are now under investigation for hosting photos but he believes the number of victims could grow. Stars and Stripes identified at least two additional web pages where anonymous users claiming to be active-duty servicemembers regularly share explicit photographs of women who are purported to be in the military.

“We have expanded it based on the criminal intelligence that has come in to other groups outside of Facebook groups too,” Evans told reporters at the Pentagon.

The Internet sites are often private and can be created and closed within days, he said. The Air Force, Army and Coast Guard investigative divisions are now involved and working with NCIS and the Marine Corps.

Meanwhile, the probe of Marines United – the defunct Facebook page that sparked the scandal – consists of tips and hundreds of pages of screenshots handed over last month by Thomas Brennan, a journalist with the War Horse and veteran who blew the whistle on the nude photo sharing activity.

Before shutting down, the site had about 30,000 members and was used by some members to post revealing and sometimes nude photos of the Marines, identifying information such as names and duty stations, and degrading and misogynistic comments.

Using the site screenshots, NCIS has identified 1,253 page members, including 725 active-duty and 150 Reserve Marines, as well as 15 sailors, Evans said.

“That does not imply any criminal allegation with those individuals. The limited amount of individuals that were involved in criminal activities we have opened up criminal investigations on,” he said.

Evans did not provide any additional information on what criminal investigations have been launched.

However, investigators do not have access to the Google drive used by Marines United page members to share photos of female servicemembers without their consent. NCIS said it received information from Brennan that about 500 members might have accessed the drive, though it has not confirmed that.

Marines Commandant Gen. Robert Neller testified to the Senate this week and told lawmakers the service believed 500 accessed the drive but he did not have a breakdown of how many of them might be serving in the military.

“We only have the information that we’re provided by the victims who call us or individuals with direct knowledge that give us particular screenshots, we do not have access to the site so I cannot tell you what that Google drive had in it,” Evans said.

He said Google and Facebook have been cooperating with the investigation.

NCIS is working to collect evidence as quickly as possible as tips and allegations come in because it can disappear quickly in cyberspace, Evans said.

“It’s the No. 1 priority for our agency right now, so we are throwing every resource we have at it,” he said.