NCIS agents brush up on forensic skills at Camp Foster 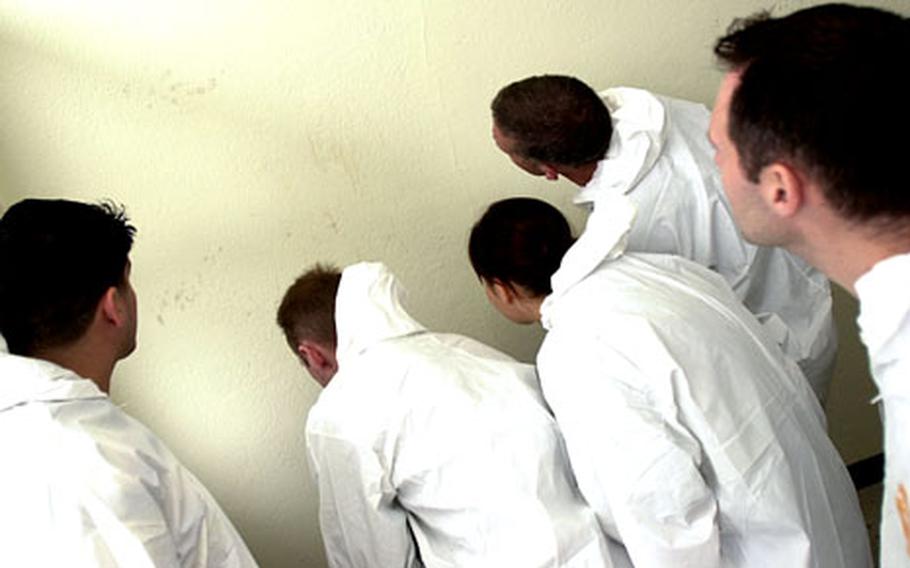 Students examine a blood-spatter pattern on the wall of a vacant house in the Futenma housing area on Camp Foster during an advanced crime-scene training session sponsored by the Naval Criminal Investigative Service on Wednesday. (Cindy Fisher / S&S)

Students examine a blood-spatter pattern on the wall of a vacant house in the Futenma housing area on Camp Foster during an advanced crime-scene training session sponsored by the Naval Criminal Investigative Service on Wednesday. (Cindy Fisher / S&S) 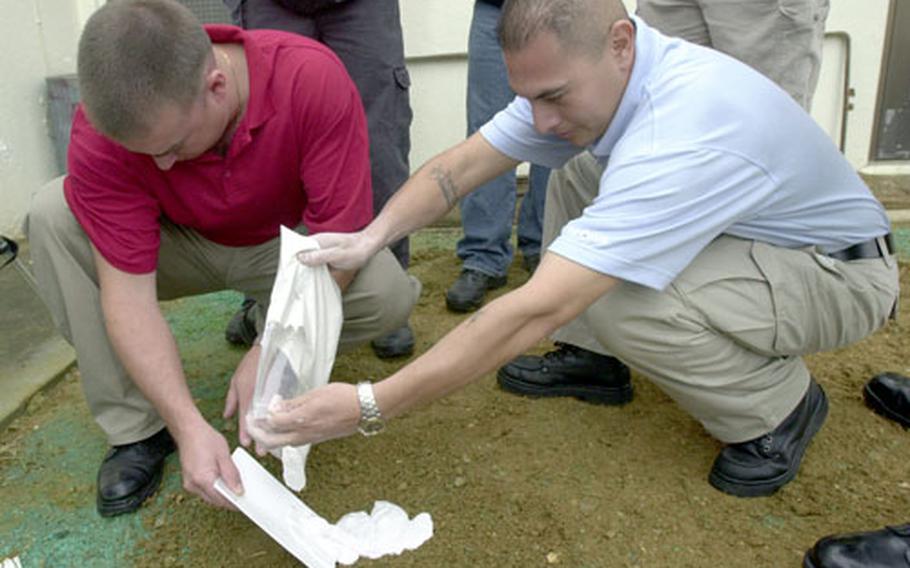 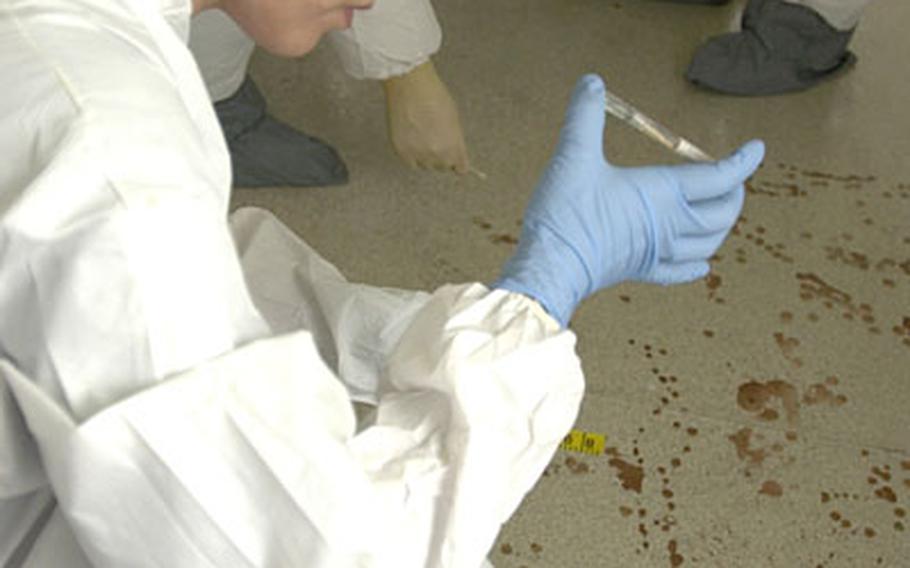 Sgt. Alma Fennell tests the stains on the floor of a vacant house in the Futenma housing area on Camp Foster during then advanced crime-scene training exercise. (Cindy Fisher / S&S) 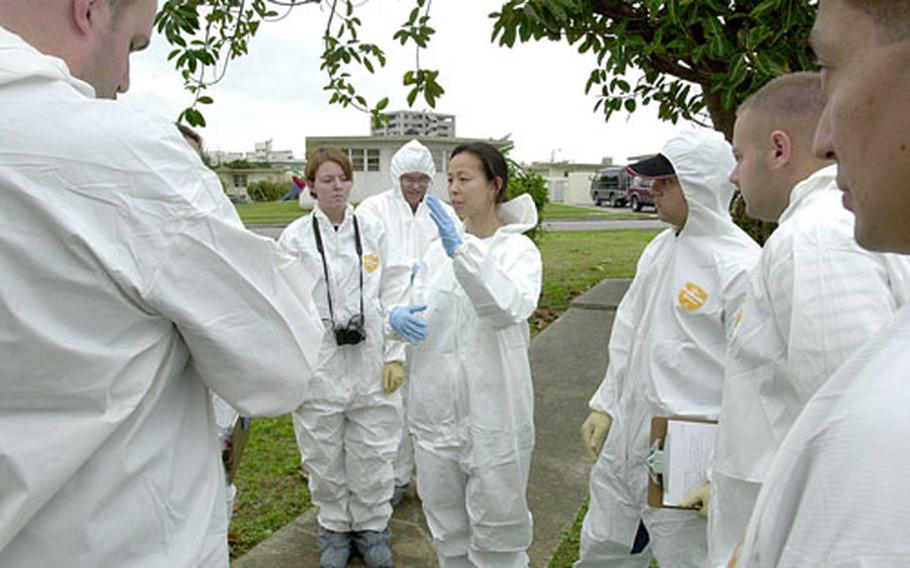 Special agent Elizabeth Toomer, center, with Naval Criminal Invistigative Service on Yokosuka Naval Base, Japan, and an instructor for advanced crime-scene investigation training, tells her students she wants them to examine the blood splatters in the empty house at Camp Foster, and then tell her what they think happened. (Cindy Fisher / S&S) 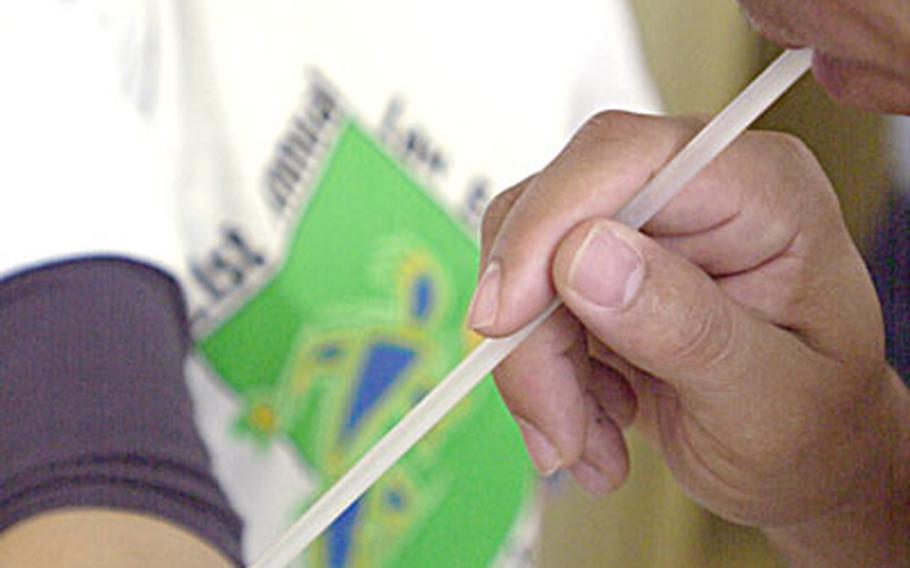 Intern Elvis Rodriguez, with the Army Criminal Investigative Service on Torii Station, Okinawa, blows liqui-lift across fingerprints on the arm of Special Agent Elizabeth Toomer, who walked Rodriguez through the process for lifting fingerprints from skin. (Cindy Fisher / S&S)

&#8220;A crime scene is a huge puzzle and we just have to compile the evidence piece by piece,&#8221; said Mari Nash, an NCIS supervisory special agent on Okinawa.

Thirty Department of Defense law enforcement officials from 13 agencies throughout the Pacific were here for 2&#189; days of advanced crime-scene training and a refresher in basics of evidence gathering.

Agents practiced fingerprint- lifting techniques, tread-impression casting and other basic skills while sharing different experiences. Instructors also taught advanced skills such as blood-splatter analysis and the use of Luminol, a chemical used to detect trace remnants of blood at crime scenes.

Everything must be preserved and documented at a crime scene, she said, and only through hard work can an investigator determine what is actually evidence that relates to the case at hand.