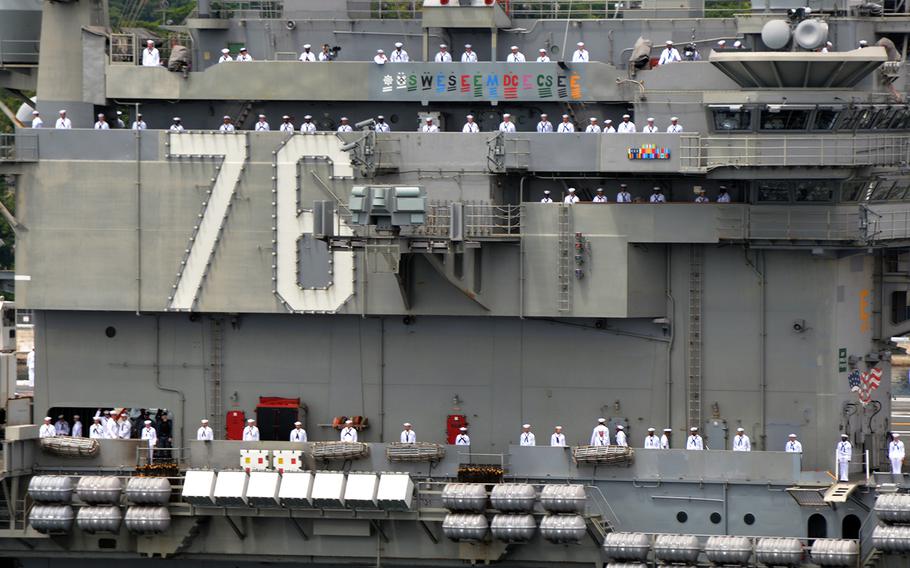 Sailors man the rails of the aircraft carrier USS Ronald Reagan as it departs Yokosuka Naval Base, Japan, in May 2018. (Peter Burghart/U.S. Navy)

YOKOSUKA NAVAL BASE, Japan — The 7th Fleet has begun screening all personnel accessing its warships and aircraft as the new coronavirus continues to spread across parts of Asia, Navy officials said Monday.

“At this time, there are no indications that any U.S. 7th Fleet personnel have been affected by [the coronavirus]” he added.

Word of the checks came the same day that U.S. Forces Korea announced that a 61-year-old female dependent living in Daegu, South Korea, had tested positive for the virus, which is also known as COVID-19. The command also temporarily closed Defense Department schools and imposed travel restrictions.

The 7th Fleet’s checks will include questionnaires and self-reporting opportunities, as well as other medical screening, Stars and Stripes learned Monday. Officials have also made plans to provide supportive care and isolation if warranted, and ship commanding officers can implement additional screenings after the initial assessments if deemed necessary.

The U.S. Embassy in Japan raised the travel risk in the country to Level 2 — “exercise increased caution” — over the weekend. As of Sunday, there were 132 confirmed cases of the virus in Japan, according to the World Health Organization. Symptoms include cough, sneezing and shortness of breath.

The Yokosuka-based 7th Fleet’s area of operations spans 124 million square miles from the International Date Line to the India-Pakistan border and from the Kuril Islands to the Antarctic. The four countries with most coronavirus cases — China, South Korea, Japan and Singapore — all fall within the 7th Fleet’s area of responsibility.

“We will continue to mitigate the risk to force while continuing to support the mission in support of our operational strategy and in accordance with Centers for Disease Control, World Health Organization, and Navy Bureau of Medicine and Surgery guidance,” Keiley said.

The U.S. Army Japan commander will also host a town hall Wednesday at the Camp Zama Community Club “to discuss housing and health concerns,” he added.