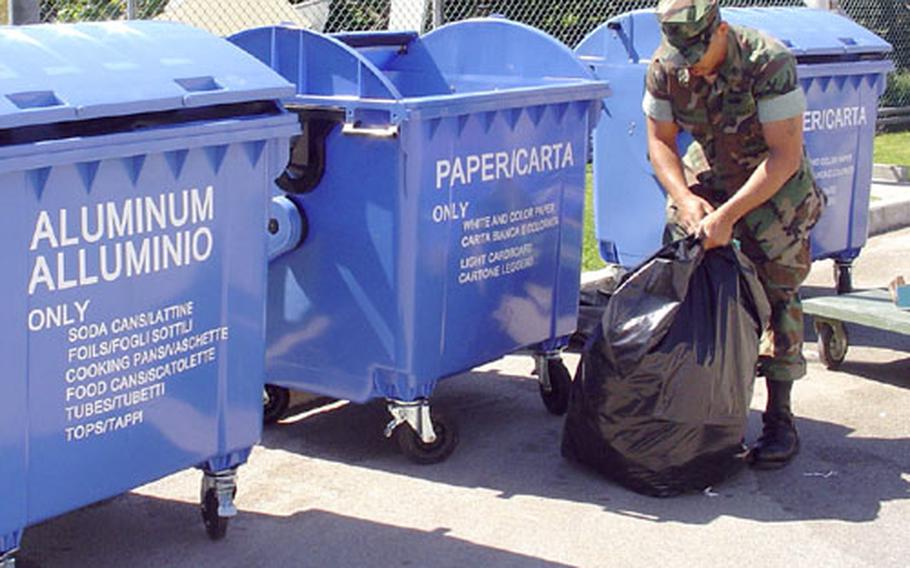 Naval Support Activity Naples, Italy, is taking its new recycling program one page &#8212; and one aluminum can &#8212; at a time.

A lot of the base&#8217;s waste comes from cardboard and wood from the base supply, he said.

The department focused early collection efforts on those materials. For the rest of the base, which is mostly administrative in nature, Vann said, the department wanted to focus on waste paper and aluminum cans.

Since the program started, most buildings have received recycling bins ranging in size from standard home garbage cans to shoebox-sized paper collection boxes. Large blue dumpster-sized recycling bins are at central points on the base for large amounts of material.

In its nearly three weeks of operation, the program has already filled about a dozen of the blue paper bins.

A contractor takes the gathered materials from the base for recycling.

At this early point, Vann said, the department is not receiving money for the materials, but it is receiving benefits from the program.

The department hopes to expand the recycling program and accept plastic waste, Vann said. The program will eventually include the Gricignano housing area, he added.

Naval Support Activity Naples&#8217; recycling program for waste paper, cardboard, aluminum cans and wood may be new, but the Public Works Environmental Division has always recycled a handful of items that are considered hazardous materials.

It will accept batteries ranging from the small AAA batteries in calculators to car batteries. Car batteries also can be turned into the Navy Exchange Autoport facility.

All collected items are accepted at the facility, then stored and disposed of by Environmental Division personnel.

Additionally, newly arriving personnel can stop at the facility and take any of the household cleaning supplies.

The facility&#8217;s hours are from noon to 3 p.m. on Wednesdays and 7:30 a.m. to 3 p.m. on Fridays. It is located next to the privately-owned vehicle lot behind the base hospital.