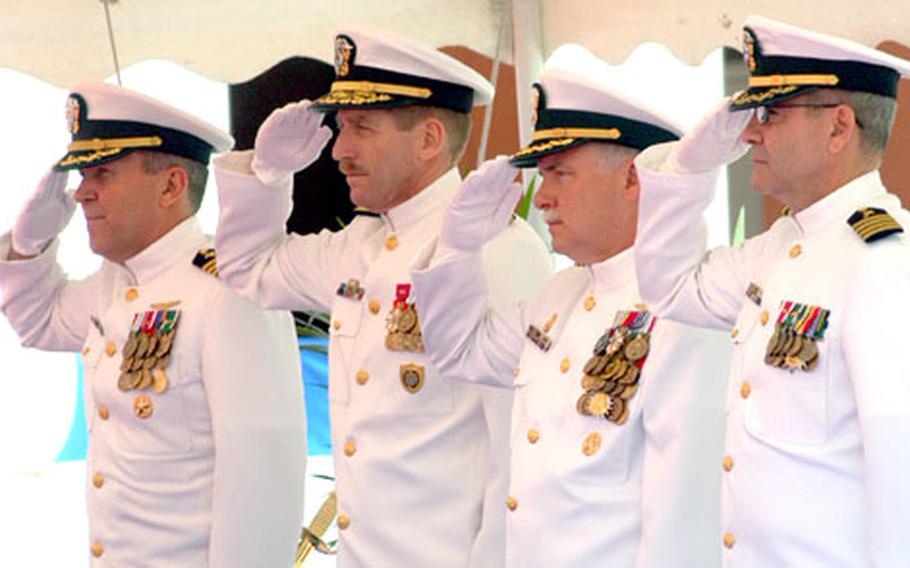 Capt. David Frederick turned over command of Naval Support Activity Naples, Italy, to Capt. Gerald Hehe on Friday, on a morning that luckily didn&#8217;t start off with a bang.

About two hours before the ceremony started, an unattended package caused base security forces to close the back gate and evacuate the medical and dental clinic less than 50 yards from the ceremony site.

It was a seemingly fitting end to a three-year command in which Frederick dealt with, as Chaplain (Capt.) Robert Malene said during his invocation, thousands of complaints about on-base trash and dogs in housing, among other contentious issues.

But during those three years, the base also saw enormous change.

Many projects were completed during Frederick&#8217;s tenure, including the final phases of a move for base personnel and support services from Agnano to the Capodichino and Gricignano bases, and the moves and consolidation of the 6th Fleet and Naval Forces Europe headquarters at Capodichino.

Frederick will depart Naples for Millington, Tenn., where he will serve as Navy Personnel Command&#8217;s director for career progression.

Hehe comes to Naples from a tour as operations officer of the USS George Washington carrier strike group. He has served at various shore and sea commands, including a tour as commander of the Carrier Airborne Early Warning Squadron 123 &#8220;Screwtops.&#8221;