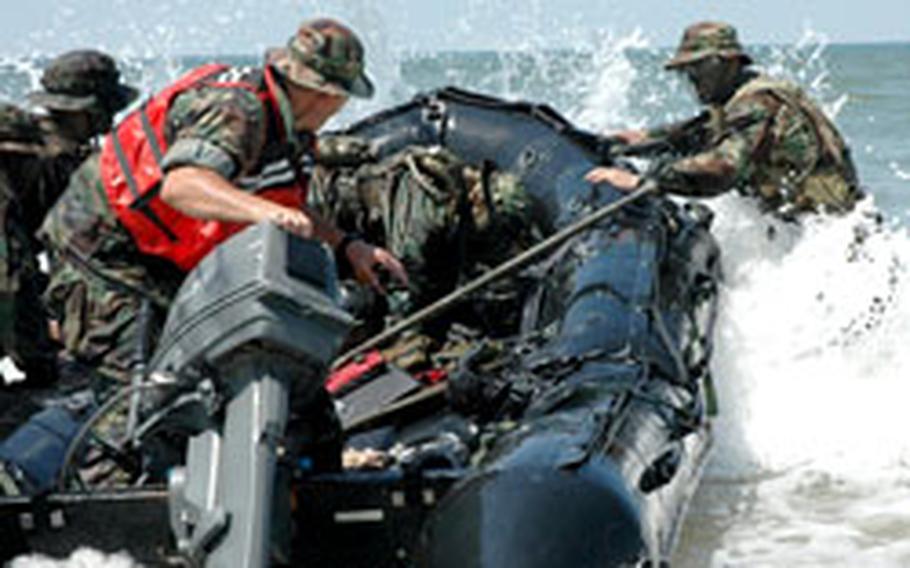 “Trident” cadets at the Naval Special Warfare Orientation course practice an ocean extraction with a Zodiac F-470 off the coast near Virginia Beach. (Navy League)

“Trident” cadets at the Naval Special Warfare Orientation course practice an ocean extraction with a Zodiac F-470 off the coast near Virginia Beach. (Navy League) 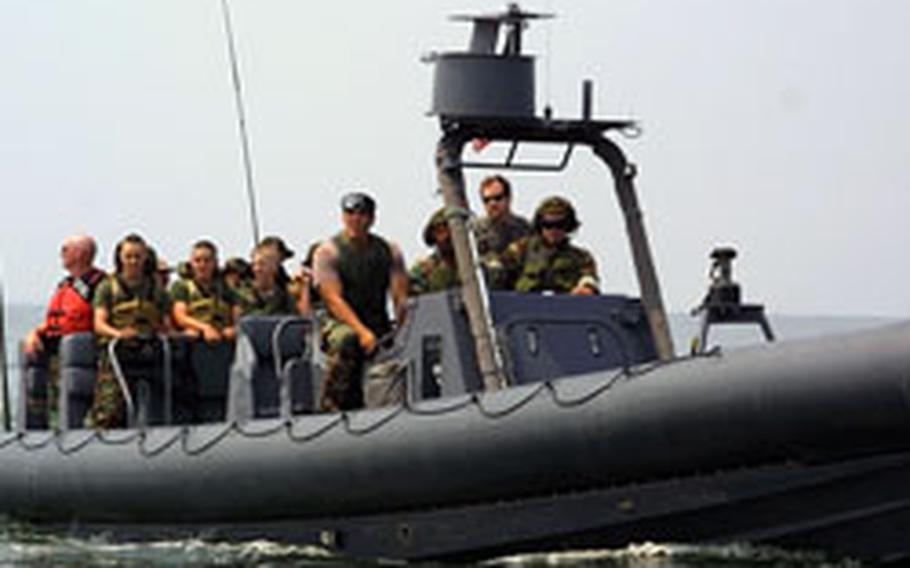 Cadets learn how to get a Zodiac F-470 through the surf. It’s a tricky maneuver and if everyone is not working as a team, the boat will get “sideways” and possibly flip over, instructors say. (Navy League) “Trident” cadets do “log drills” on the beach adjacent to the Navy UDT-SEAL Museum in Fort Pierce, Florida. (Navy League)

Carina Nichols used to be a follower.

Carina, 16, is four years into the Navy League&#8217;s Naval Sea Cadets program, aimed at teaching youngsters about the military while developing a sense of responsibility, maturity and civic duty, said executive director Mike Ford of the Naval Sea Cadet Corps.

Though not aimed specifically for at-risk youth, the program does attract a number of them because many centers are located in high-population, urban areas, Ford said.

&#8220;We&#8217;re geared toward educating kids, helping them mature and develop self-esteem and confidence,&#8221; he said in a phone interview from Arlington, Va.

Except for a handful of administrative employees, the program&#8217;s 2,200 adults are volunteers like Marshall Muros, who works for the Okeechobee County Sheriff&#8217;s Office and volunteers to run the program&#8217;s sole &#8220;Trident&#8221; training, oriented to naval special warfare and arguably one of the most demanding.

Sea Cadets, for youth ages 11 to 17, is not a recruiter for the Navy, or the military in general, Ford said. But many graduates venture on to military service, including making up nearly 10 percent of the freshman class at the U.S. Naval Academy, Ford said.

The program gives applicants an advantage for acceptance, he said. Some who join the enlisted ranks can start in the military as an E-3, bypassing the lower two ranks.

Applicants must be U.S. citizens, in good health, full-time students maintaining a C grade point average and free of felony convictions. They attend two-week boot-camp-style training camps, and can select programs from hospital training to construction, and the coveted SEAL training.

The organization has 374 chapters with roughly 8,200 participants this year in every state except Wyoming, Ford said.

Sea Cadets has exchange programs with 11 countries, where American youth participate in two-week programs overseas, and students from those countries train in America.

It started in 1958 when the Navy asked the Navy League to develop a cadet program. Congress chartered it four years later, which meant it could get federal funding.

The nonprofit program gets about 60 percent of its budget from federal grants, 25 percent from the Navy League, and the rest in donations, including through the Combined Federal Campaign. Some portions of the program require cadets to pay fees.

Information is available at: http://www.seacadets.org/public/