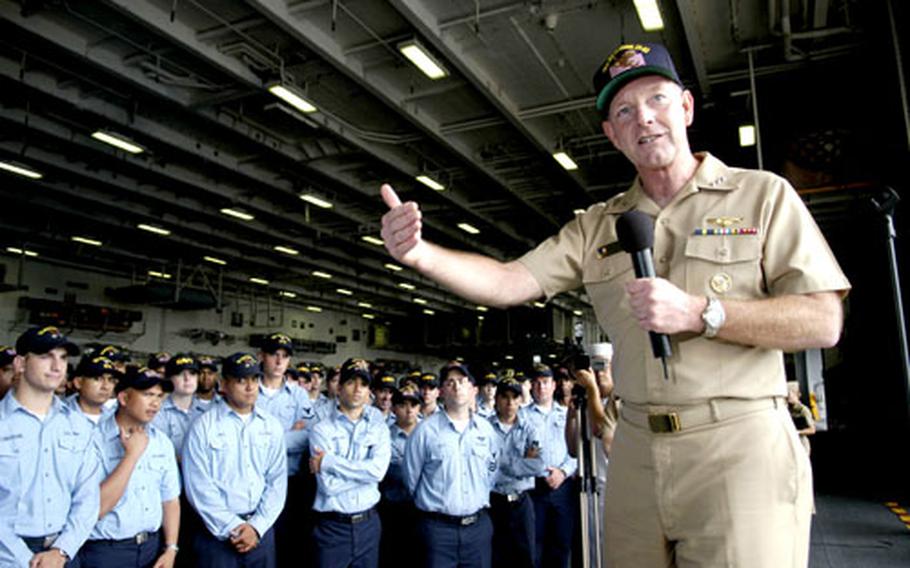 YOKOSUKA NAVAL BASE, Japan &#8212; The chief of naval personnel visited Yokosuka and Guam last week to tell sailors and leaders about new Navy policies and how they could affect sailors&#8217; careers.

Hoewing said his main message was that as the Pentagon reduces the Navy&#8217;s numbers, expectations as well as opportunities for sailors will be higher.

&#8220;We are going to be a little bit smaller in the number of people we have,&#8221; he said. &#8220;But those people are going to be more experienced, more technically oriented, healthier, better educated and more capable.&#8221;

Hoewing said some programs are still works in progress.

Among the policy changes is a rule that sailors now must make E-6 in 14 years to stay until retirement. In the past, sailors could retire as E-5s. Along with that, first-term sailors in overmanned fields will be able to move to more critical jobs where there is less competition, making advancement easier for them and for the sailors in the overmanned fields.

The program, called Perform to Serve, will encourage sailors into fields where the Navy needs people, such as the master-at-arms rating, which has grown from 1,800 people to 10,000 since 2003, Hoewing said.

The change could help prevent sailors who are dissatisfied with their careers from staying in the Navy just to reach the magic 20-year retirement mark.

In the future, changes to the overall retirement program could give sailors a way out with some form of retirement before two decades, Hoewing said. But for now, Navy leaders hope new programs can help keep sailors motivated and in the jobs that suit their needs and the Navy&#8217;s.

Another change, Hoewing said, is the approach to fitness. For about six years, the Navy stopped sacking those who couldn&#8217;t pass physical fitness assessments. That is changing.

&#8220;We started getting feedback from the fleet, mostly from the senior enlisted, that the fitness of the force was getting worse and that was having an effect on readiness,&#8221; Hoewing said. &#8220;So we wanted to put the teeth back into our fitness programs.&#8221;

The change means commands will make more time for fitness, will hold those who do not pass tests more accountable, and will keep better track of fitness-improvement programs.

The emphasis will be on both individual and group fitness, and commands will begin competing with each other.

For those who do not make the grade, there will be more accountability placed on improvement programs. &#8220;It&#8217;s not about throwing sailors out of the Navy because they don&#8217;t meet fitness standards, though we will do that,&#8221; he said. &#8220;What we want them to do is show the correct amount of progress toward achieving those goals.&#8221;