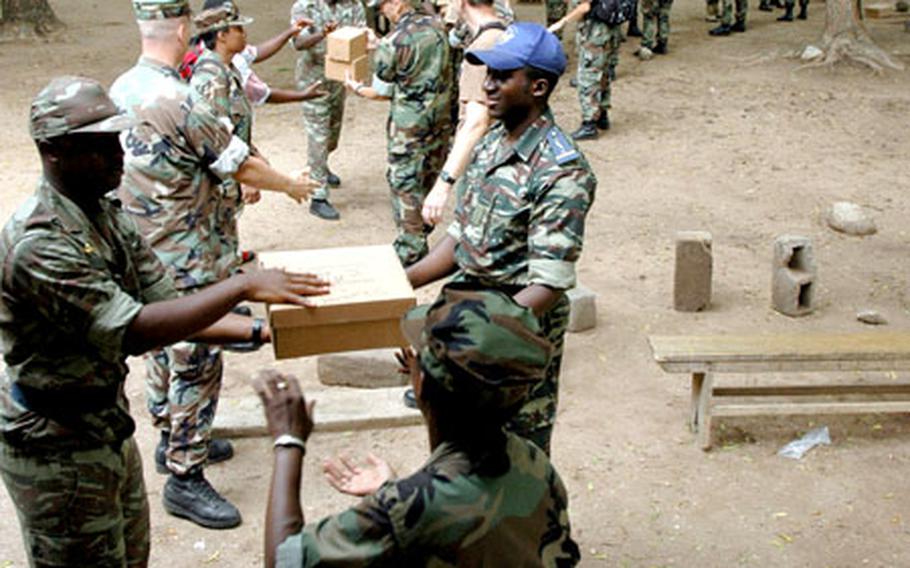 U.S. sailors and Cameroonian soldiers set up a pharmacy during the West African Training Cruise in Garoua, Cameroon. The medical exercise earlier in this month, which took place in Cameroon and Gabon, is part of the U.S. military’s decade-long mission to help 10 West African nations develop or improve their security. (Mark Duehmig / U.S. Navy)

U.S. sailors and Cameroonian soldiers set up a pharmacy during the West African Training Cruise in Garoua, Cameroon. The medical exercise earlier in this month, which took place in Cameroon and Gabon, is part of the U.S. military’s decade-long mission to help 10 West African nations develop or improve their security. (Mark Duehmig / U.S. Navy) 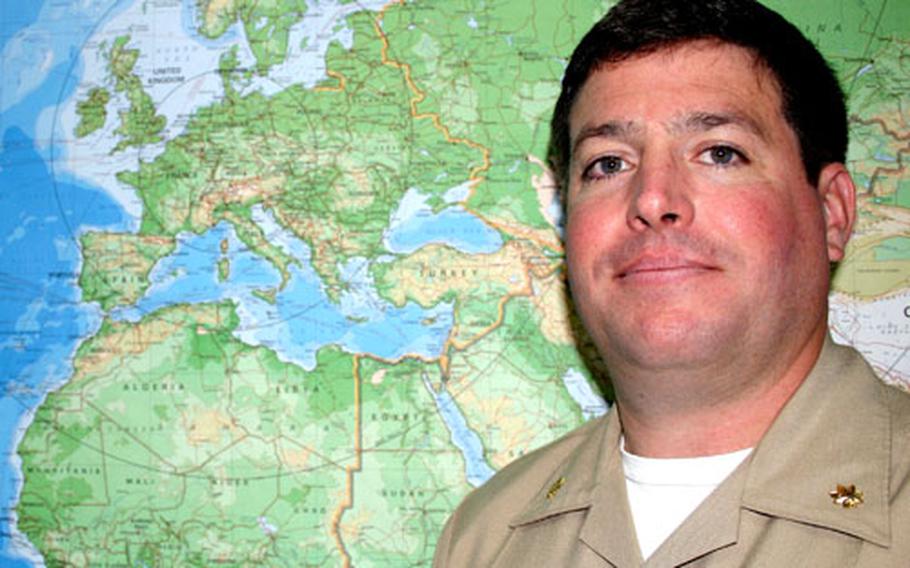 Petroleum protection is not the only reason behind the U.S. military&#8217;s long-term thrust into the Gulf of Guinea to help West African nations.

&#8220;It&#8217;s not all about oil,&#8221; said Lt. Cmdr. Dan Trott, Gulf of Guinea strategy and policy desk officer for U.S. Naval Forces Europe Sixth Fleet. &#8220;It comes down to, there are a lot of resources in the region, and when you get to the nexus of an area with a lot of resources and not a lot of security, then you have the opportunity for the bad actors.&#8221;

The Navy wants to help protect the fishing industries as well as to combat piracy, drug trafficking and terrorism in the region, officials said.

&#8220;Part of the U.S. interest is access to the region for trade, for just regular activities, whether transporting goods or transporting oil or gas,&#8221; he said.

&#8220;Maritime security is an important component of our ongoing efforts in the war on terror,&#8221; Griffitt said. &#8220;For us not to be engaged in an effort to improve maritime security, both in the region and on the continent, would be us failing to do our job as part of the broader war on terror.&#8221;

The Gulf of Guinea mission, however, goes beyond just military-to-military training. It includes talks with business leaders, other governmental and ministerial officials and representatives from the nations&#8217; fishing industry, Trott said.

&#8220;[Maritime security] affects fisheries, it affects the energy industry, and so we want to enlighten as many of those people as possible to get them to start working together,&#8221; he said. &#8220;This is not just a Ministry of Defense issue. It&#8217;s economic development.&#8221;

Even nations with small or presently nonexistent navies are important to the endeavor, Trott said.

&#8220;You can still talk about maritime security &#8230; talk to their navies and other leadership inside their governments, the budget decision-makers, and start figuring out what are the resources that they need.&#8221;

And some of the nations could receive gifts from the U.S. government, such as S&#227;o Tom&#233; and Pr&#237;ncipe, which soon will receive a Boston Whaler from the U.S. Coast Guard to conduct littoral patrols.

There are no immediate plans to build permanent U.S. bases in any of the gulf countries, Trott said. However, the U.S. military does have &#8220;cooperative security locations,&#8221; or basic facilities typically built for exercises that are not manned, but &#8220;if we&#8217;re invited by the country to come in for humanitarian assistance or other activities, there is a small piece, like a concrete pad, and Quonset huts, where we can start to set up shop,&#8221; Trott said.