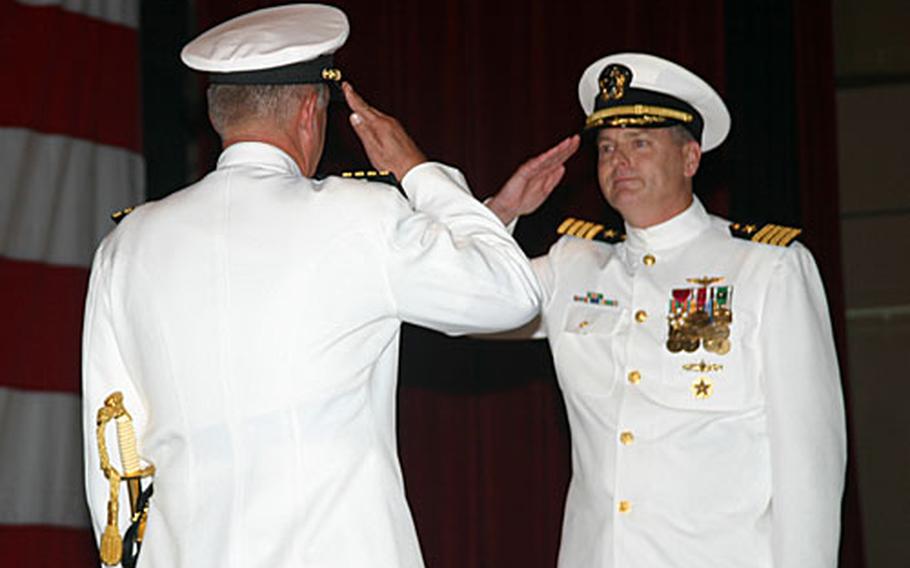 Capt. Scott Galbreaith assumed command of Naval Base Guam from Capt. Kenneth Freeman during a change-of-command ceremony Friday at the base theater.

&#8220;Capt. Freeman leaves a legacy that will benefit us now and for years to come,&#8221; said Rear Adm. William French, commander Naval Forces Marianas, the guest speaker. &#8220;He made it his priority to improve the quality of life of sailors and their families. The result is modern, comfortable homes and cleaner, safer work environments.&#8221;

French added that he looked forward to Galbreaith&#8217;s vision and leadership.

Freeman thanked many of those with whom he had worked during the past two years, and made particular note of the improvements in base housing.

He said that as a result of the base housing office efforts, families moving in had better choices, and that a housing shortage for enlisted sailors was coming to an end.

Freeman also singled out the base security team, acknowledging the difficult but vital nature of their job. &#8220;You are true professionals,&#8221; he said.

In his brief remarks, Galbreaith noted that this was actually his second assignment to Guam. In 1985, he was assigned to what was then HC-5 at now-deactivated Naval Air Station Agana as a helicopter pilot.

Freeman will report to the Naval Safety Center in Norfolk, Va., where he will assume his new position as the director of Shore Safety Programs.