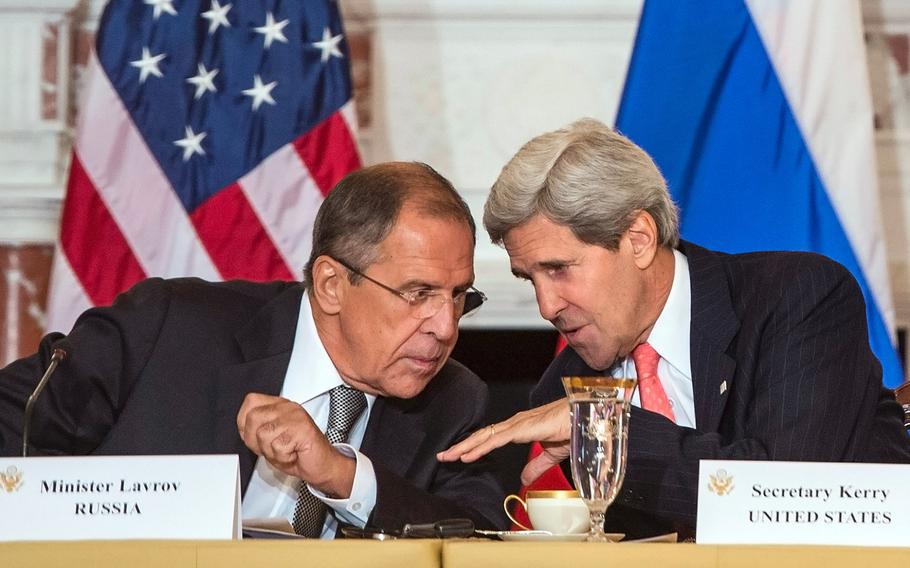 Secretary of State John Kerry, right, confers with Russian Foreign Minister Sergey Lavrov during a meeting at the Department of State in Washington, D.C., on Aug. 9, 2013. On Monday April 7, 2014, Kerry told Lavrov that events in the Ukraine appeared to be a carefully orchestrated campaign with Russian support. ( Aaron Hostutler/U.S. Marine Corps)

NATO warned Russia on Tuesday against any interference in the events in eastern Ukraine, where pro-Russian protesters have seized government buildings and are demanding secession from Ukraine.

Secretary-General Anders Fogh Rasmussen urged Moscow to pull back its troops from the border between the two countries.

“If Russia were to intervene further in Ukraine, it would be a historic mistake,” Rasmussen told journalists in Paris.

The new government in Kiev has accused Russia of fomenting the latest unrest, during which protesters seized several public buildings and declared independence from Ukraine.

Relations between Ukraine and Russia have deteriorated sharply since protesters ousted Ukraine’s Moscow-backed president on Feb. 22 after months of demonstrations. Russian forces took over Crimea, which has a majority Russian-speaking population, and Moscow annexed it on March 21.

Russian leaders have said they have no intention of invading eastern Ukraine. But the annexation of Crimea, combined with the presence of more than 30,000 Russian troops near the border, has sparked concerns that Moscow may send its forces in on the pretext of protecting Russian speakers in eastern Ukraine.

“I continue to urge Russia to pull back its troops, fulfill its international commitments and engage in a constructive dialogue with the Ukrainian government,” Rasmussen said.

Last week, NATO foreign ministers decided to suspend all “practical” military and civilian cooperation with Russia. Separately, the United States and the European Union announced a series of sanctions targeting Russian officials and institutions and threatened to strengthen those measures if Russia moved into eastern Ukraine.

NATO has also stepped up an air-policing mission over the Baltic states and dispatched AWACS surveillance planes over Poland and Romania. The U.S. sent more F-16 fighter jets to Poland and joined Romania and Bulgaria in naval exercises in the Black Sea.

In Brussels, a senior NATO diplomat said that in the interest of de-escalating the crisis, the European Union would take the political lead in dealing with Ukraine, while NATO would play a “supporting role” for the time being. Most experts believed that the military measures taken so far were sufficient to deter any threats and reassure alliance members in the Baltics and eastern Europe, and that Russia was unlikely to pose a threat to any NATO member, said the envoy, who spoke on usual condition of anonimity.

Meanwhile, Russia’s Foreign Ministry warned on Tuesday that Ukraine’s eastern region could spiral into civil war if Kiev tries to put down the pro-Moscow uprisings.

On Monday, U.S. Secretary of State John Kerry told his Russian counterpart, Sergey Lavrov, that Washington was monitoring events in eastern Ukraine and said that these did not appear to be “a spontaneous set of events,” spokeswoman Jen Psaki said.

“He conveyed to Foreign Minister Lavrov that the United States is watching events (in the cities of) Kharkiv, Donetsk, Luhansk, and Mariupol with great concern,” she said, adding that Kerry had noted “that this appeared to be a carefully orchestrated campaign with Russian support.”

Kerry called on Russia to publicly disavow the activities of “separatists, saboteurs, and provocateurs,” Psaki said.

Kerry and Lavrov discussed convening direct talks within the next 10 days among Ukraine, Russia, the United States, and the EU to de-escalate the tensions.