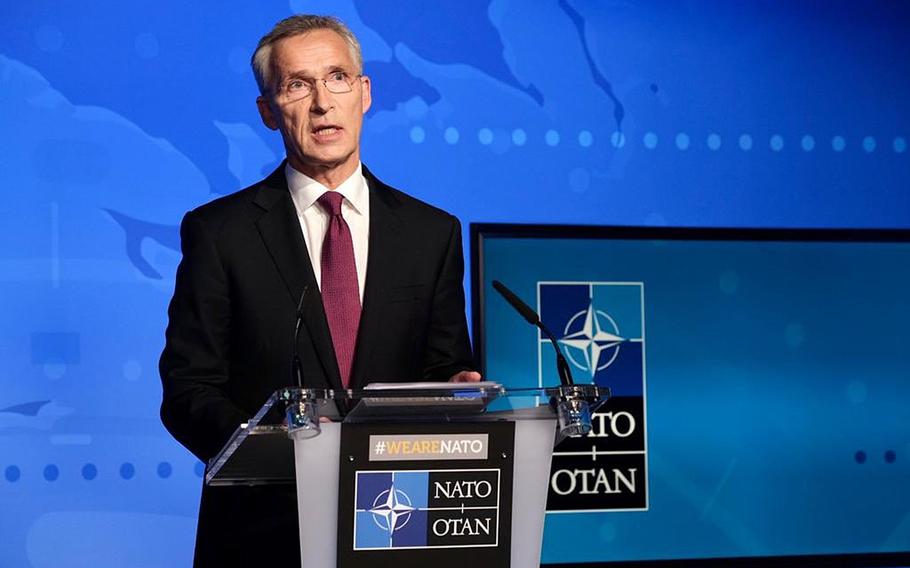 NATO Secretary General Jens Stoltenberg condemned the poisoning of Russian dissident Alexei Navalny, Friday, Sept. 4, 2020, and said there was no doubt that a military-grade nerve agent was used. (NATO/Twitter)

STUTTGART, Germany — The poisoning of Russian dissident Alexei Navalny demands an international response, NATO’s top official said Friday after alliance officials were provided with proof that a military-grade chemical agent was used to try to assassinate the 44-year-old Muscovite.

“Time and again, we have seen opposition leaders and critics of the Russian regime attacked, and their lives threatened,” Secretary-General Jens Stoltenberg said.

“Some have even been killed … It is a serious breach of international law, which demands an international response,” he said after an emergency meeting in Brussels about the poisoning.

Navalny, a prominent opponent of Russian President Vladimir Putin and a longtime anti-corruption activist who has exposed numerous cases of graft among Russia’s elite, became sick on a flight to Moscow on Aug. 20.

Doctors at the hospital in Russia where he was initially held said they found no evidence of poisoning. But after he was flown by air ambulance to Berlin, where he is in a medically induced coma, German authorities said the same kind of nerve agent that was used to try to kill former Russian spy Sergei Skripal and his daughter in Salisbury, England, in 2018, had been found in Navalny’s system.

“There is proof beyond doubt that Mr. Navalny was poisoned using a military-grade nerve agent from the Novichok group,” Stoltenberg said. “The use of such a weapon is horrific.”

Kremlin spokesman Dmitry Peskov on Thursday said the Russian government has not seen any evidence that Navalny was poisoned.

Polish Prime Minister Mateusz Morawiecki said on Twitter that the poisoning of Navalny was the latest example of Russian aggression after the 2008 war with Georgia, the 2014 seizure of the Crimean Peninsula and the invasion of eastern Ukraine, the shooting down of a Malaysian Airlines flight, and the poisoning of the Skripals.

“How many wake-up calls do we need to finally realize that we are dealing with a hostile regime?” Morawiecki tweeted Thursday.

“Dialogue, partnership, compromise - these are alien words to them. Time to draw conclusions,” he said.

Although the NATO leaders at Friday’s meeting didn’t propose any concrete measures against Moscow, Stoltenberg called on Russia to agree to an impartial international investigation.

“NATO Allies agree that Russia now has serious questions it must answer,” he said.

The poisoning of Navalny has also raised calls for allies to take a tougher stance against Russia, including for German Chancellor Angela Merkel to cancel the nearly completed Nord Stream 2 pipeline project with Moscow, which would provide Russian gas directly to Germany via a pipeline under the Baltic Sea.

The U.S., under both President Donald Trump and former President Barack Obama, has been critical of the project, saying it increases European dependence on Russian energy.