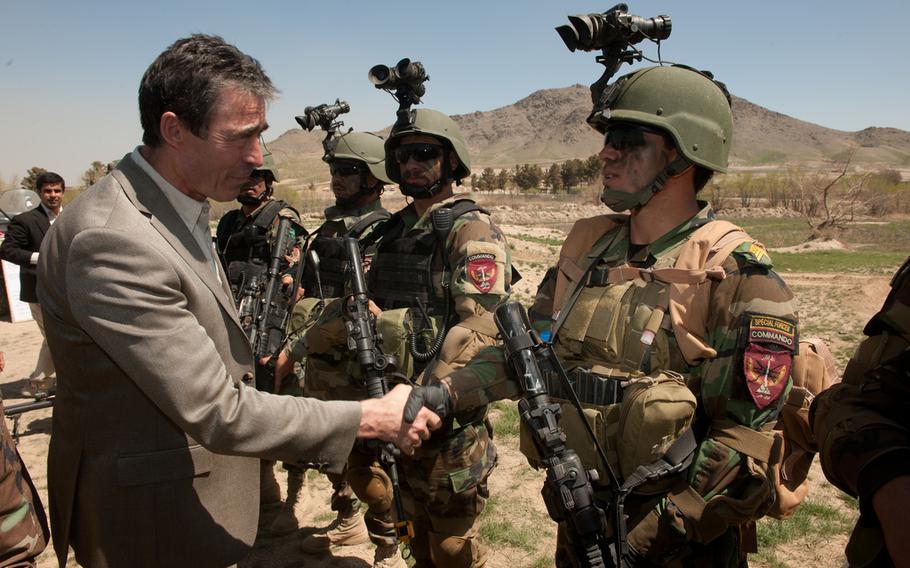 NATO’s top official expressed confidence on Wednesday that the United States and Afghanistan will reach agreement on a follow-on mission to train and advise Afghan forces after the alliance withdraws its combat troops at the end of next year.

U.S. officials say that unless a bilateral security pact is reached with the government of President Hamid Karzai, the U.S. may have to pull all its troops from the war-ravaged nation after the drawdown. NATO sees this as a precondition for its own agreement with Kabul.

Talks on the new post-2014 accord have been stalled over Karzai’s insistence that U.S. troops should not enjoy immunity from prosecution in Afghanistan. Washington has rejected the demand that American advisers be placed under Afghan judicial jurisdiction. A similar dispute about immunity derailed U.S. talks with Iraq two years ago.

Recently, however, administration officials have expressed optimism about the outcome of the talks. Defense Secretary Chuck Hagel told reporters traveling with him on Tuesday to Brussels for a NATO Defense ministers’ meeting that the two sides had made good progress in talks held last week between Karzai and U.S. Secretary of State John Kerry.

A possible accord is slated to be debated next month by a consultative assembly of tribal elders known as the Loya Jirga, after which it will be submitted to parliament for formal approval.

“We welcome the progress we have seen in negotiations between the United States and Afghanistan on a bilateral security agreement,” NATO Secretary-General Anders Fogh Rasmussen said.

“Having said, that I’m confident that the BSA will be concluded, will be approved, and then followed by a NATO status of forces agreement which is a prerequisite for our deployment of troops and trainers to Afghanistan after 2014.”

Rasmussen was speaking to reporters at the end of the two-day meeting of defense ministers from NATO and partner nations whose troops are part of the international coalition in Afghanistan.

He praised the growing capabilities of Afghanistan’s 350,000-strong army and police forces, which are now in the lead in combating Taliban and other insurgents throughout the country.

“They have shown they are up to the job. They have mounted operations across the country with minimal or no [coalition] support,” he said.

The international coalition is due to cut its present 100,000-member force in half over the next few months. Analysts estimate the number of insurgents at between 20,000 and 30,000.

Despite their overwhelming superiority in firepower and numbers, the international force and its Afghan allies have been unable to stamp out the insurgency during the 12-year war.