NATO troubled by plan for Kosovo army, which US backs 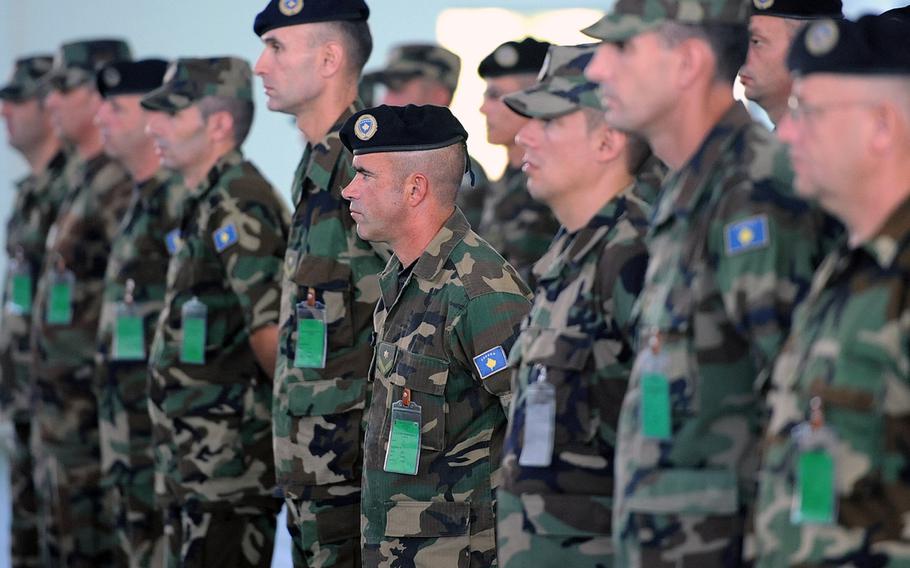 Kosovo Security Force noncommissioned officers stand in formation at their senior NCO course graduation ceremony at a KSF base in Ferizaj, Kosovo. NATO will reconsider its support to it gives to Kosovo's security forces after the country's decision Friday to take a step toward forming an army. (Michael Abrams/Stars and Stripes)

NATO will reconsider the support it gives Kosovo’s security forces after the country’s decision Friday to take a step toward forming an army, laying bare a disagreement between the military alliance and the United States.

“I regret that this decision was made despite the concerns expressed by NATO,” alliance chief Jens Stoltenberg said in a statement on Friday. “While the transition of the Kosovo Security Force is in principle a matter for Kosovo to decide, we have made clear that this move is ill-timed.”

For nearly 20 years, U.S. and allied troops have deployed to Kosovo where they continue to operate today as peacekeepers. On Friday, the U.S. Embassy in Kosovo posted a statement on its website supporting the country’s move toward its own military.

“The United States reaffirms its support for the gradual transition of the Kosovo Security Force (KSF) to a force with a territorial defense mandate, as is Kosovo’s sovereign right,” the statement said.

U.S. Ambassador to Kosovo Philip Kosnett told broadcaster RTK in Pristina on Thursday that it was “only natural” that the country would build its own defense capability.

However, the move by Kosovo’s parliament to create a military — which is expected to take up to a decade to become fully operational — has raised concerns about an escalation in tensions with neighboring Serbia.

Stoltenberg said the alliance remains committed to its peacekeeping mission, but Kosovo’s decision means allies may need to scale back support it gives to the country’s existing paramilitary security force, which will be formally redesignated as an army.

Allies have long voiced concern about Kosovo seeking to transform its 4,000-strong security force into a regular army. Kosovo’s decision will likely upset Serbia, which fears an army could be used to target minority Serbs in the north of Kosovo.

“All sides must ensure that today’s decision will not further increase tensions in the region,” Stoltenberg said. “All responsible political actors in the region need to focus on progress with reforms, and on dialogue.”

Serbia’s President Aleksandar Vucic has vowed never to recognize the independence of Kosovo, which he regards as a renegade territory.