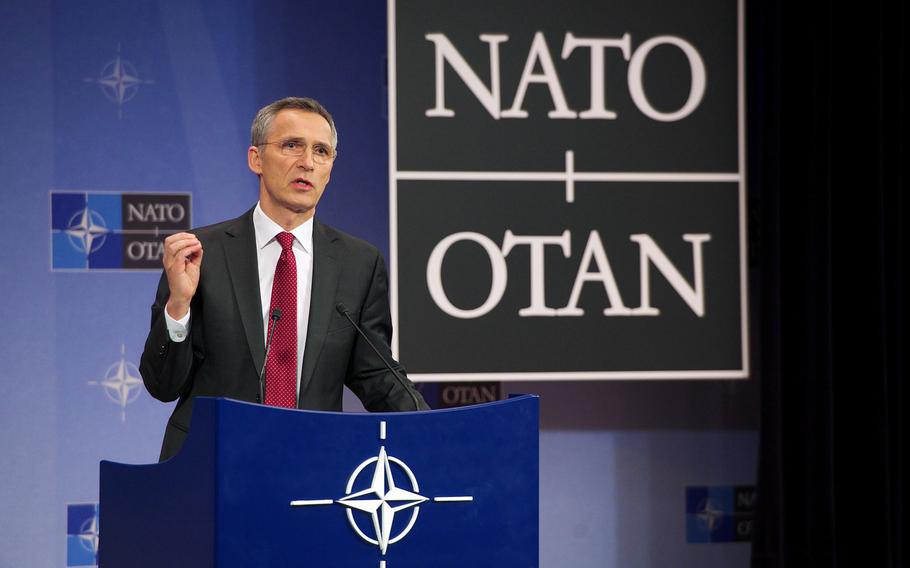 NATO members this week will approve plans for a more robust military presence along Russia’s periphery, a stakes-raising move as Moscow threatens countermeasures to U.S. plans to bolster its forces along NATO’s eastern flank.

NATO faces a difficult balance as it seeks to deter Russian aggression against vulnerable eastern allies without inciting a military escalation, which some analysts warn could result.

“As long as we are firm, predictable and strong, we can also engage with Russia in political dialogue,” NATO Secretary-General Jens Stoltenberg said Tuesday. “We don’t seek confrontation with Russia. We do not seek a new Cold War.”

Stoltenberg, speaking ahead of a two-day meeting of alliance defense ministers that starts Wednesday, said effective deterrence requires a forward presence that can also be quickly reinforced.

“I expect ministers to agree to enhance our forward presence in the eastern part of our alliance,” Stoltenberg, who stopped short of detailing the shape of that force.

The new steps are likely a prelude to more NATO action expected to come later this year when allies convene in Warsaw for a major summit on NATO’s adaptation as it faces the dual threat of Russia in the east and widespread instability to the south in northern Africa and the Middle East.

However, with NATO stepping up its presence in the east and Russia bolstering its own forces, some military analysts warn that, left unchecked, the moves could increase the risk of confrontation.

“Both Russia and NATO see their deployments and increased focus on exercises as necessary development of their previous force postures,” says a new report by the European Leadership Network, a London-based think tank. “Each side is convinced that its actions are justified by the negative changes of its own security environment caused by the other side.”

While the report blames Russia as the cause for Europe’s deteriorating security environment — pointing to Russia’s actions in Ukraine and an aggressive, nuclear saber-rattling posture — allies should avoid an excessive buildup in the east, the report cautions.

“If unchecked, this action-reaction dynamic could lead to further deterioration of the security situation. There would also be a higher risk of unintended escalation following an incident involving the armed forces of NATO countries and Russia,” the report says.

There have been some close calls over the past year or more, with Russian fighter planes violating alliance airspace and reports of possible Russian submarines trolling the coastlines of allied territory. Late last year, NATO member Turkey shot down a Russian fighter jet that Ankara said had strayed in to Turkish air space from Syria, which Russia denied.

For the U.S.-led NATO alliance, Russia’s 2014 seizure of Ukraine’s Crimea peninsula and continuing intervention in support of pro-Russian rebels in Ukraine’s east has sparked a series of reforms intended to buttress allies in the east and send a message of resolve to Moscow. NATO already has doubled its crisis response force to 40,000 troops and set up small headquarters across the Baltics to facilitate the flow of forces.

The U.S. has carried much of the load in the region, maintaining a continuous presence of infantrymen on the ground to carry out exercises with allies. In 2015, the U.S. Army also sent 250 tanks and other heavy equipment to Europe. And the Pentagon’s 2017 spending plan includes $3.4 billion for the European Reassurance Initiative. The package, quadruple the amount from the previous year, calls for an additional brigade’s worth of combat ready tanks, artillery and soldiers to be deployed into Europe as well as increased air and navy presence.

“The U.S. is showing leadership and I think it is a very important decision,” Stoltenberg said. “I think this is also important because it is a signal to European NATO allies that they also need to step up, and they actually are doing that.”

Russia’s envoy to NATO, Alexander Grushko, warned Monday that a buildup of NATO forces along Russia’s periphery “can’t be left without a military-technical answer,” The Associated Press reported Monday. He did not specify what steps Moscow would take.

Russia has beefed up its military presence near the Baltics and in its enclave of Kaliningrad, which is nestled between Poland and Lithuania on the Baltic Sea. Along with massive “snap” exercises that mobilize thousands of forces on short notice, Moscow also has steadily upped its investment in defense.

Indeed, Russia’s more muscular posture is backed up by a military that has undergone a rapid transformation, which began well before Moscow’s intervention in Ukraine or NATO’s buildup in the east. Between 2004 and 2013, Russia’s defense budget increased by 108 percent, according to data compiled by the Stockholm International Peace Research Institute.

During that same time frame, nearly all NATO allies in Europe made drastic cuts to their own defense budgets. Stoltenberg said allies are beginning to reverse that trend, with most NATO members at least holding steady on defense spending in 2015 rather than making cuts.

While Russia has the advantage of geography, with more forces and firepower in close proximity to the Baltics than NATO does, allies collectively spend about $1 trillion on defense. That dwarfs Russian expenditures. Still, reinforcements in the east are needed, Stoltenberg said.

“This will bolster our collective defense,” he said. “And at the same time send a powerful signal to deter any aggression or intimidation.”