NATO suspending all cooperation with Russia amid Ukraine crisis 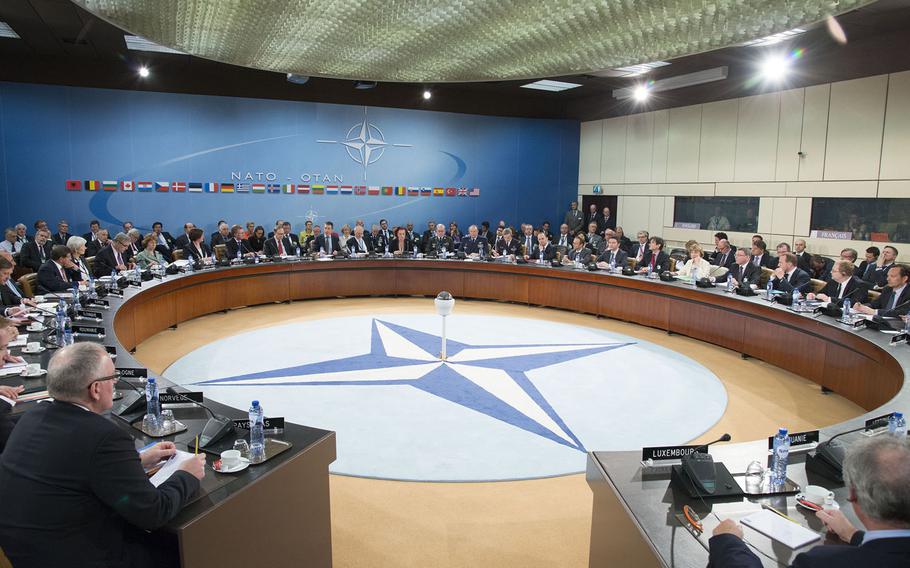 General view of the meeting of NATO Ministers of Foreign Affairs on April 1, 2014. NATO foreign ministers decided to suspend all cooperation with Russia due to the ongoing crisis. (NATO)

General view of the meeting of NATO Ministers of Foreign Affairs on April 1, 2014. NATO foreign ministers decided to suspend all cooperation with Russia due to the ongoing crisis. (NATO) NATO foreign ministers Tuesday ordered an end to all practical civilian and military cooperation with Russia, telling their generals and admirals to come up with ways to better defend Eastern European members after the alliance chief said there’s no sign Moscow is withdrawing forces from Ukraine’s eastern border.

Russia’s annexation of Crimea and troop buildup along the border with Ukraine led the alliance to change the agenda for the first of two days of meetings from the withdrawal of U.S. forces in Afghanistan to avoiding another military conflict in Europe.

NATO’s supreme allied commander, Gen. Phillip Breedlove — who was ordered back from Washington to attend the two-day ministerial meeting — has warned that Russia had assembled a “very sizable and very, very ready” combat force close to its border with Ukraine.

“I think everybody realizes that the best way forward is a political and diplomatic dialogue,” Anders Fogh Rasmussen said before heading into meetings with NATO’s foreign ministers. “Really I don’t think anybody honestly would like to see a military confrontation in Europe.”

On Monday, the Russian Defense Ministry announced that a motorized infantry battalion was pulling out after participating in exercises near the Ukrainian border. But Rasmussen dismissed reports that Russia had withdrawn some of its troops from the area.

“This is not what we are seeing,” he told reporters. “And this massive military buildup can in no way contribute to a de-escalation of the situation, a de-escalation that we all want to see. So I continue to urge Russia to pull back its troops, live up to its international obligations and engage in a constructive dialogue with Ukraine.”

Rasmussen repeatedly said he hoped to find a diplomatic solution to the standoff.

The foreign ministers decided Tuesday to suspend all civilian and military cooperation between NATO and Russia, but to continue the alliance’s political dialogue with Moscow through the so-called NATO-Russia Council, NATO said in a statement. The body, which consists of the ambassadors of all NATO nations and Russia, meets regularly at the alliance’s Brussels headquarters.

The ministers also decided to “intensify cooperation and promote defense reforms” in Ukraine, reinforcing the alliance’s liaison office in Kiev with additional experts.

The statement did not clarify whether NATO would stop using a key supply route through Russia for its forces in Afghanistan. Known as the Northern Distribution Network, the overland route has carried about 40% of all supplies. It is considered crucial for the retrograde of military equipment from Afghanistan due to ongoing diplomatic spats with Pakistan.

The alliance has already increased its air policing in the Baltic states of Lithuania, Estonia and Latvia, Rasmussen noted, and “will not hesitate to take further steps if needed to ensure effective deterrence and defense,” among them stepped-up exercises and “appropriate deployments.”

The Baltic nations, which are members of both NATO and the European Union, have signaled they’d like to see more NATO help in deterring possible Russian incursions onto their soil.

Lithuanian Defense Minister Juozas Olekas said Tuesday that a series of Russian military exercises conducted in the region “has created a new situation for us.”

The Pentagon announced Tuesday that the deputy assistant secretary of defense for Russia/Ukraine/Eurasia, Evelyn Farkas, along with Maj. Gen. Randy Kee, EUCOM’s director for strategy and policy, were in Kiev on Tuesday for bilateral defense consultations with Ukraine.

They met with the Ukrainian minister of defense to discuss regional security, defense cooperation and areas for growth in the U.S.-Ukraine defense relationship. The last time this kind of regularly scheduled consultation was held with the Ukrainians was in March 2013, and it was held at the Pentagon.“

Three C-130J Super Hercules aircraft and approximately 100 personnel, most from Ramstein Air Base in Germany, arrived in Poland over the weekend as part of the regularly scheduled quarterly aviation detachment rotation. They are scheduled to remain there through April 12.

This is the third C-130 rotation and the sixth overall training rotation that the aviation detachment has hosted since October 2012.

While Olekas said he thinks NATO has done enough so far to protect the region, he’d like to see the alliance send ground and naval forces to bolster deterrence. “Looking [to the] future, we need to increase this permanent participation for NATO military forces to be more ready” to act against possible aggression.

It was not immediately clear whether any additional units might be sent to the Baltics or to other Eastern European states. But Article 5 of NATO’s founding treaty treats any attack against a member state as an act of aggression against the entire alliance.

Until now, NATO has refrained from establishing a large, permanent presence on the territory of its eastern members out of concern for Russian worries about being encircled by the alliance, which Moscow views as an aggressive force after the wars in Kosovo and Libya.

Stars and Stripes reporters Jon Harper and Adam Mathis contributed to this report.