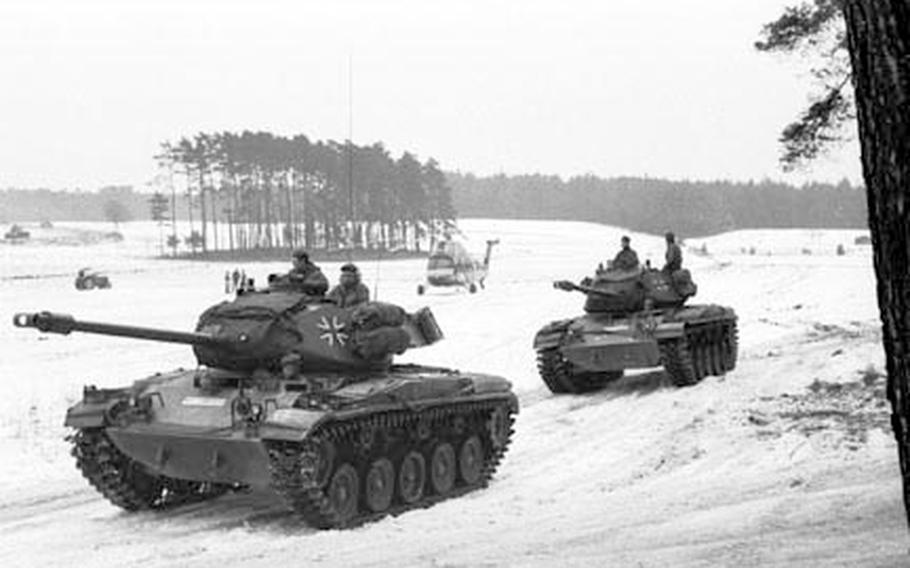 ''Aggressor'' armor from the German Army's 123rd Tank Battalion rumbles past a parked U.S. Army helicopter on the outskirts of Burglengenfeld, Germany, during the Winter Shield II exercise in February, 1961. (Gene Bane / ©S&S)

''Aggressor'' armor from the German Army's 123rd Tank Battalion rumbles past a parked U.S. Army helicopter on the outskirts of Burglengenfeld, Germany, during the Winter Shield II exercise in February, 1961. (Gene Bane / ©S&S) 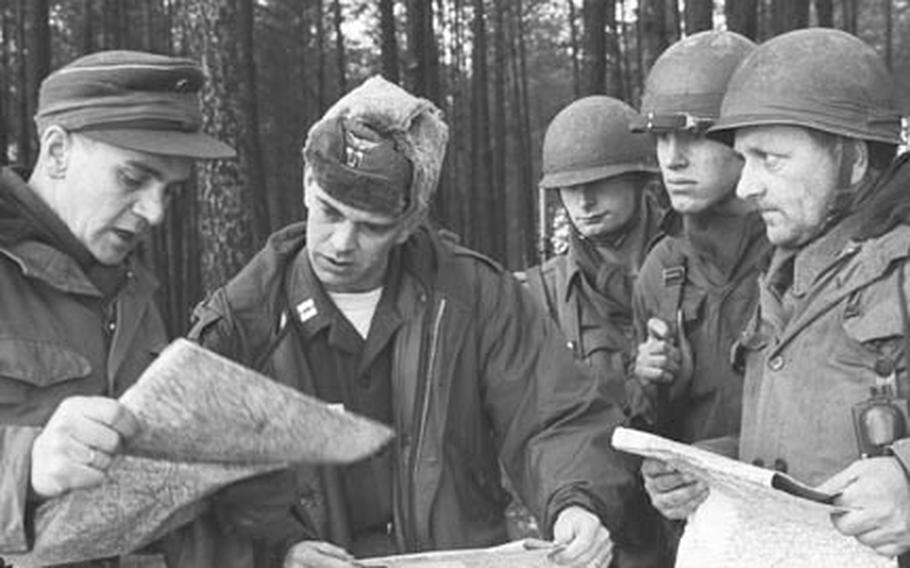 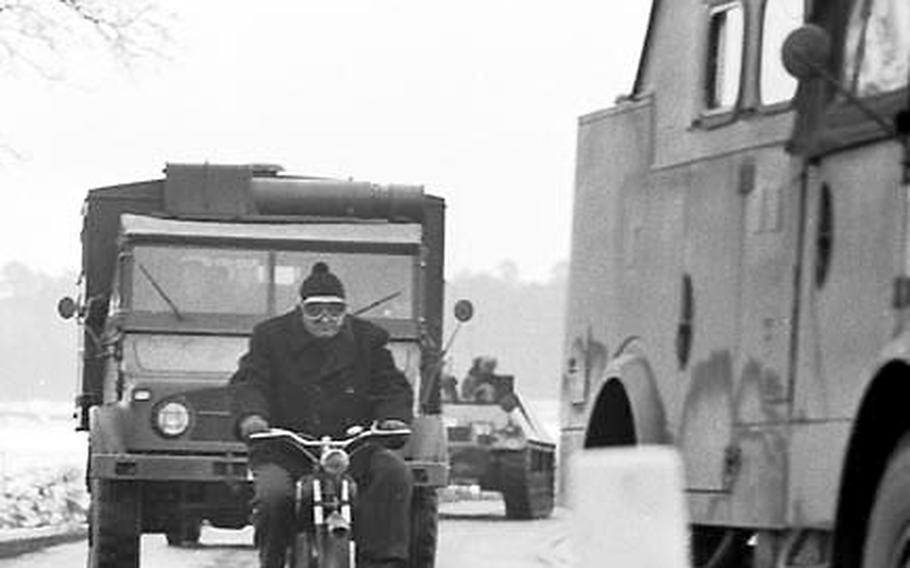 A cyclist shares the road with much larger vehicles from the German Army at Burglengenfeld. (Gene Bane / ©S&S) 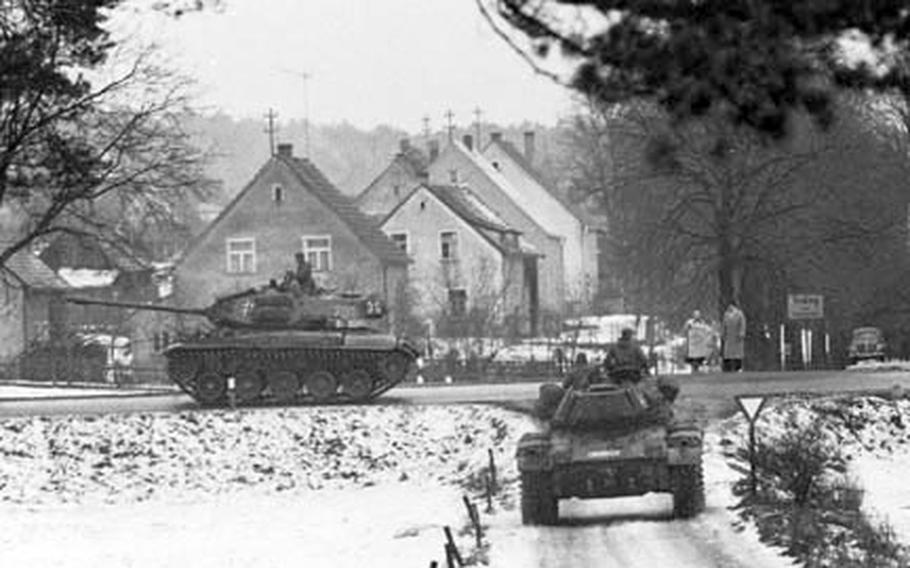 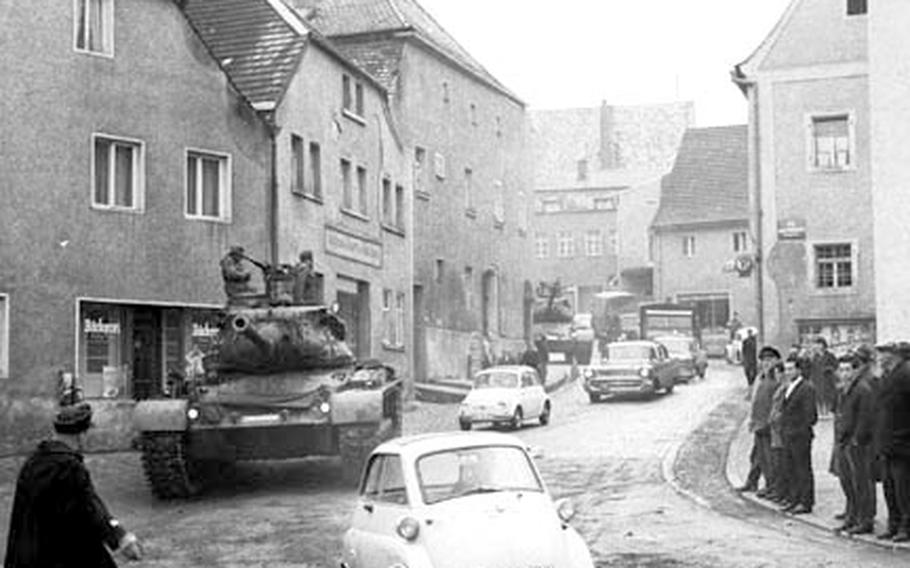 A battlefield report from the "NATO" commander credited the 14th Armd Cav Regt, the 3rd Recon Sq of the 8th Cav, and the French 11th Mech Brig with halting the invaders shy of the main "NATO" defenses.

Screening and delaying action by the three units in the day-long snow was so effective that the "Aggressor" thrust failed to reach the outpost line.

A halt was called at 3 p.m. Saturday so the Grafenwoehr training area could be cleared to make room for a live-fire artillery demonstration scheduled for Sunday afternoon. The 24th Inf Div is directing the artillery show.

New snow Saturday made roads treacherous and mixed with the mud which has been plaguing both man and machine since the six-day maneuvers got under way shortly after midnight Thursday.

Air Weather Service at Rhine-Main Air Base said a warm front was heading for the mock battlefield in southeastern Germany and snow would be turning to rain which would continue intermittently Sunday. The mercury was expected to climb into the low 40s Sunday.

While more snow may fall Sunday in the higher areas of the muddy battlefield, the rain plus the temperature climb are expected to add up to more mud.

The big maneuvers resume Monday with a major counteroffensive expected from the "NATO" side of the lines aimed at forcing the"Aggressors" to withdraw southward their "international boundary" line on the south bank of the Danube and Altmuehl rivers.

The exercise slushes to a halt Thursday night.