NATO soldier killed in offensive against Taliban in Afghanistan 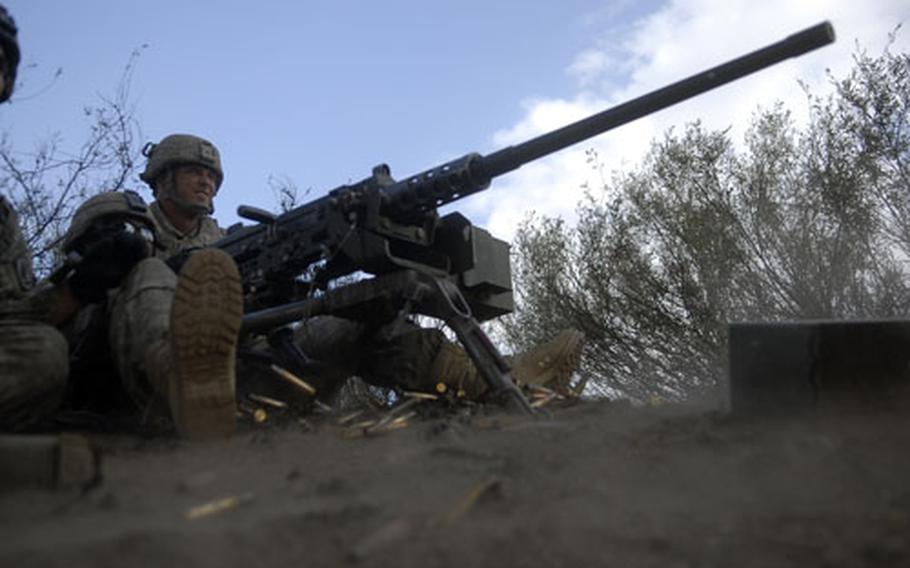 Sgt. Joshua Ochoa, 24, from Reedley, Calif., fires off a .50 mm machine gun in northeastern Afghanistan&#39;s Kunar province, near the village of Aybot. His unit is in an operation seeking to search and attack Taliban militants in the area. (Les Neuhaus / S&S)

Sgt. Joshua Ochoa, 24, from Reedley, Calif., fires off a .50 mm machine gun in northeastern Afghanistan&#39;s Kunar province, near the village of Aybot. His unit is in an operation seeking to search and attack Taliban militants in the area. (Les Neuhaus / S&S) 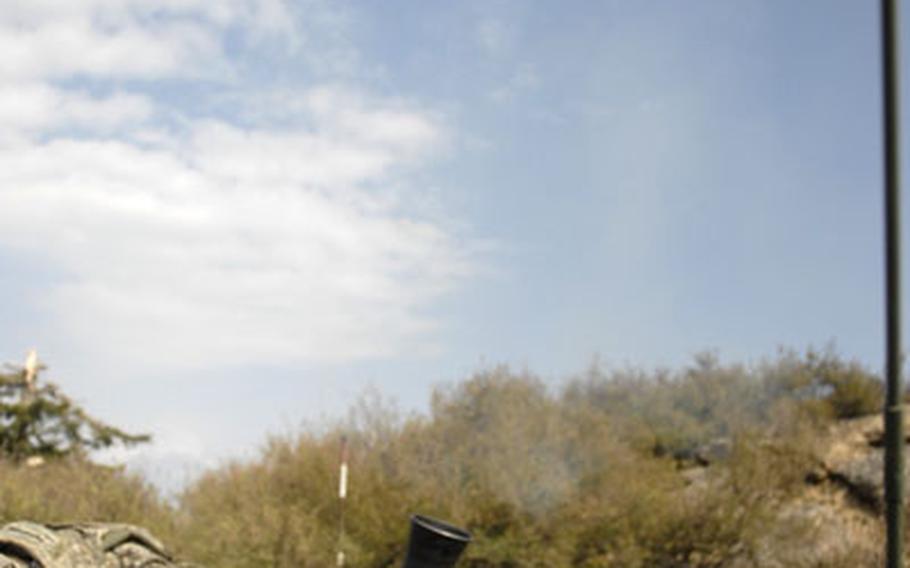 A 81 mm mortar shell is launched near the northeastern Afghan village of Aybot. The men were aiming at suspected Taliban militants. (Les Neuhaus / S&S) 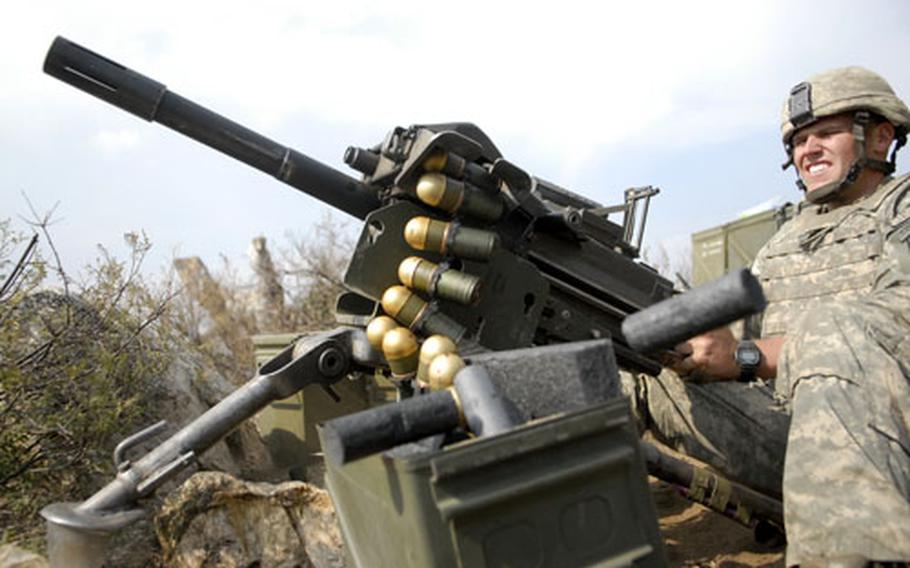 Spc. David Hooker, 22, of Palestine, Ark., shoots the MK-19, an automatic 40 mm grenade launcher, at suspected Taliban positions in the northeastern mountains of Afghanistan near the village of Aybot. (Les Neuhaus / S&S) 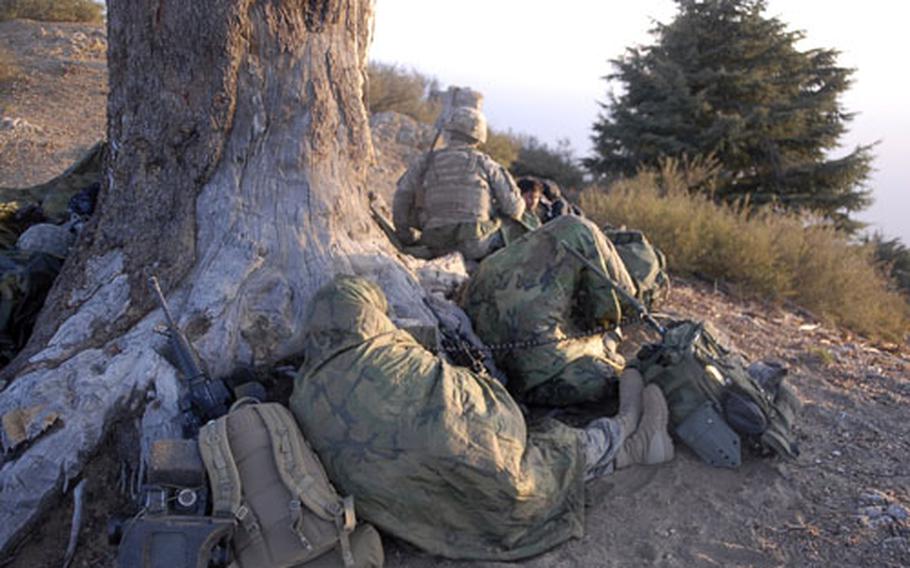 The soldiers of Company A have endured frigid temperatures in the mountains of northeastern Afghanistan while carrying out Operation Rock Avalanche. Troops got down time and used anything to cover themselves in order to keep warm. (Les Neuhaus / S&S)

AYBOT, Afghanistan &#8212; One NATO soldier was killed and two others wounded during an offensive operation against Taliban militants holed up in the northeastern mountains of Afghanistan, officials said Wednesday.

Two spokesmen with the NATO-led International Security Assistance Force, or ISAF, would not confirm whether the killed and wounded were American soldiers. But the only troops conducting the operation, called Rock Avalanche, are from the U.S. Army&#8217;s 173rd Airborne Brigade, along with Afghan forces.

An unknown number of Taliban fighters also were killed in the battle, which took place in the Korengal Valley, a volatile area bordering Pakistan.

&#8220;We have had one incident with troops in contact and one ISAF soldier was killed during operations ... and two ISAF troops were wounded,&#8221; Maj. Charles Anthony said by satellite telephone. Anthony is a spokesman for ISAF headquarters in Kabul, located roughly 180 miles southwest of where the operation is being carried out in Kunar province.

ISAF officials said close-air support was brought in to help troops in the battle Tuesday morning.

Meanwhile, three other companies conducted maneuvers on Wednesday in an effort to confuse Taliban rebels.

According to Capt. Louis Frketic, commander of the 503rd&#8217;s Company A, the mission is to weed out an organized foe. His men are atop a 7,500-foot mountain in Kunar&#8217;s Watapor Valley, another restive area close to the Korengal Valley.

&#8220;Our area is mainly comprised of hidden Taliban,&#8221; Frketic said. &#8220;The problem is that you get these huge ACM (anti-coalition militias) on the high ground, and getting control of that high ground is crucial.&#8221;

His men have endured two frigid nights, waiting for someone to make a move.

That move came on Wednesday afternoon after Taliban &#8220;chatter&#8221; intercepted by his men led to a call to cut loose with a 50-caliber machine gun, an automatic grenade launcher and a 81 mm mortar gun at suspected Taliban positions.

His men were due to move out after dark in search of Taliban positions to attack.

No captured weapons caches or captured militants were reported as of Wednesday.

A 15-year-old Afghan boy was transported by a Black Hawk helicopter to an ISAF medical facility from a small U.S. military camp after sustaining shrapnel wounds to the chest, according to U.S. soldiers operating communications equipment near Aybot, a village located near Frketic&#8217;s position.

It was unclear if the wounds were sustained from fighting related to the operation, which started early Saturday.

According to The Associated Press, underscoring the Taliban&#8217;s strength in the region, Pakistan deployed 2,500 paramilitary soldiers to part of the Northwest Frontier province on Tuesday, which borders the Kunar province where Operation Rock Avalanche is under way in Afghanistan.

The move is meant to counter a radical militant cleric call for citizens to adhere to Taliban rule.