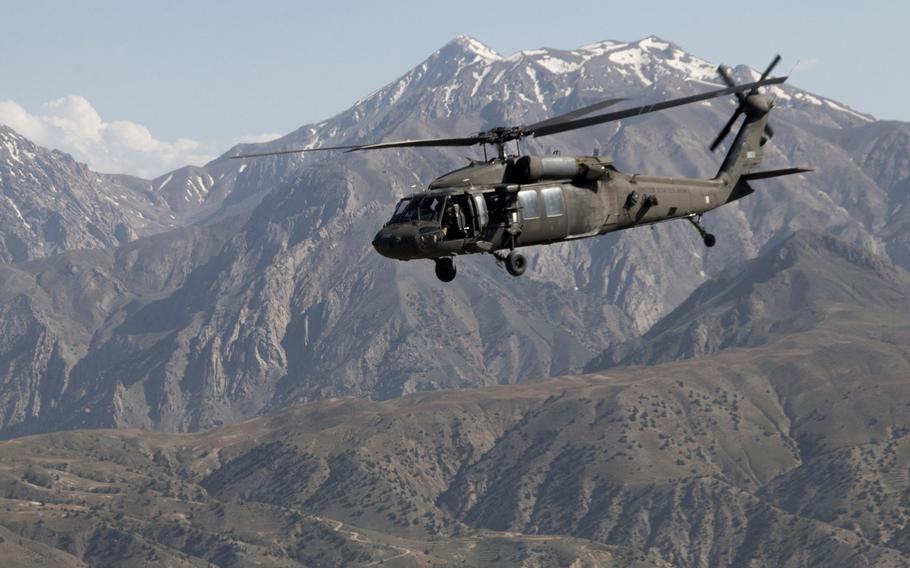 A California Army National Guard UH-60 Black Hawk helicopter transports troops in Afghanistan, May 20, 2016.At a summit in Warsaw, Poland, this week, NATO is set to commit to continue its support of government forces in Afghanistan. (Ian M. Kummer/U.S. Army)

A California Army National Guard UH-60 Black Hawk helicopter transports troops in Afghanistan, May 20, 2016.At a summit in Warsaw, Poland, this week, NATO is set to commit to continue its support of government forces in Afghanistan. (Ian M. Kummer/U.S. Army) 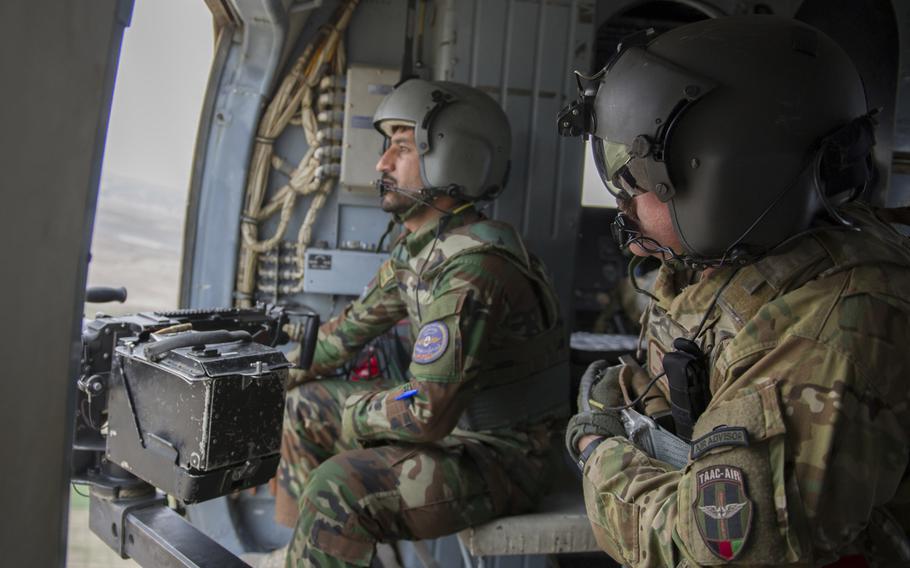 Master Sgt. Justin Kay, Train Advise Assist Command - Air Mi-17 flight engineer, right, provides overwatch from the door of an Mi-17 helicopter during a training mission on March 3, 2016. NATO is set - at a summit in Warsaw, Poland, this week - to commit to continue its support of government forces in Afghanistan. (Robert Cloys/U.S. Air Force)

NATO allies are likely to formally extend their support for Afghan forces after President Barack Obama decided to keep thousands more U.S. troops in Afghanistan than planned through the end of his term.

In outlining the agenda for NATO’s two-day summit in Warsaw, Poland, Secretary-General Jens Stoltenberg said Afghanistan will be one of the top items under discussion when member states begin their meetings Friday. Others are a buildup in eastern Europe, by deploying four battalion-strength multinational units in the Baltics and Poland, and steps to improve cyberdefense and a ballistic missile shield.

Stoltenberg on Monday pledged support for Kabul through next year, mainly through the extension of the Resolute Support training and assistance mission, and continued funding of the Afghan security forces until 2020.

NATO allies and partners are expected to make three major decisions with regard to Afghanistan, said Ismail Aramaz, the alliance’s senior civilian representative in Afghanistan. These will include sustaining the Resolute Support mission past 2016, continuing to fund the Afghan security forces and strengthening the partnership between NATO and Kabul.

Under a plan formulated by Obama’s administration ahead of the pullout of U.S. and coalition combat forces in 2014, the vast majority of U.S. troops were supposed to withdraw at the close of this year.

In the meantime, insurgent attacks throughout the country have increased dramatically, and the Taliban now control significant portions of the countryside in the south and east.

As a result, the original plan has been amended. On Wednesday, Obama — who will take part in the Warsaw summit — announced that about 8,400 troops will remain in the Central Asian nation, instead of the planned 5,500. NATO allies and partner nations are expected to contribute several more thousand troops at an upcoming force-generation conference.

At the height of the 14-year war, the international coalition consisted of 100,000 Americans and about 40,000 NATO allies.

Alliance officials and analysts say the latest changes mean a robust training and assistance mission will remain now in Afghanistan at least until the end of 2017.

“Without continued support from NATO, including air power and special forces on the ground, the Afghan security forces will start losing whole provinces in the south and east,” said Theo Farrell, visiting professor of war studies at King’s College London. “With no prospects for peace talks ... NATO will be providing financial and military support to Afghanistan for many years if a Taliban victory is to be avoided.”

Analysts predict that Washington and its 27 NATO allies will pledge about $5 billion to Afghanistan through 2020, extending an existing funding plan that is due to expire next year. The commitment will come despite a long track record of fraud within the Afghan army and police.

Though some NATO allies have grumbled about the need to continue to indefinitely fund the 352,000-strong Afghan force, a senior diplomatic official from a member nation said he expected the allies to fall into line with the U.S. proposal in Warsaw.

“At a time when the alliance needs to stand united to face a resurgent Russia, it is unlikely anyone will choose to make waves about Afghanistan,” said the diplomat, who asked not to be named since he was not authorized to speak to the media.

While NATO’s renewed commitment will focus on the training of Afghan forces, a potential U.S. extension of operations would allow for expanded American airstrikes against the Taliban. U.S. special forces will also continue to pursue al-Qaida terrorists and the small but persistent Islamic State presence there.

In the past year, Taliban guerrillas managed to briefly overrun the key northern city of Kunduz — the first provincial capital to fall to the insurgents in the 15-year war — and to threaten Lashkar Gah, the capital of southern Helmand province.

They have also staged a number of spectacular attacks in Kabul and other major cities and inflicted record casualties on the Afghan army and police.

“The Taliban have made sweeping gains in rural areas across Afghanistan these past two years,” said Farrell, who is currently writing a book on the “unwinnable” war. “Kunduz will almost certainly fall again, as will … Lashkar Gah” unless the West continues to prop up government forces, he said.

More than 3,500 international troops have died in Afghanistan — including more than 2,300 U.S. military deaths — since the U.S.-led coalition ousted the Taliban regime after the 9/11 attacks.