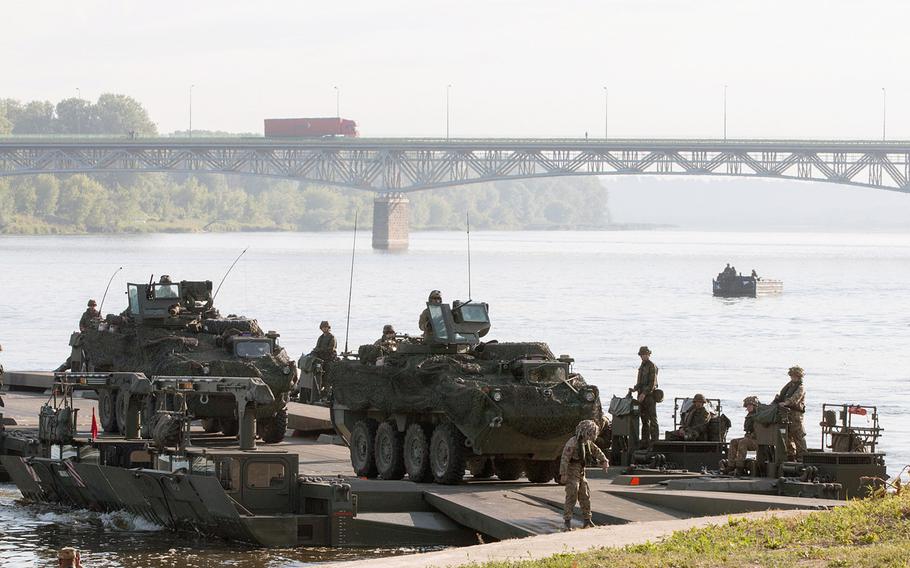 Buy Photo
U.S. Army Strykers belonging to the 2nd Cavalry Regiment cross the Vistula River in Chelmno, Poland, on Wednesday, June 8, 2016.This has been the summer of war games in Europe, where thousands of NATO troops have been on the move in a series of eye-catching military drills stretching from Poland to the Baltics and beyond. (Michael S. Darnell/Stars and Stripes)

Buy Photo
U.S. Army Strykers belonging to the 2nd Cavalry Regiment cross the Vistula River in Chelmno, Poland, on Wednesday, June 8, 2016.This has been the summer of war games in Europe, where thousands of NATO troops have been on the move in a series of eye-catching military drills stretching from Poland to the Baltics and beyond. (Michael S. Darnell/Stars and Stripes) 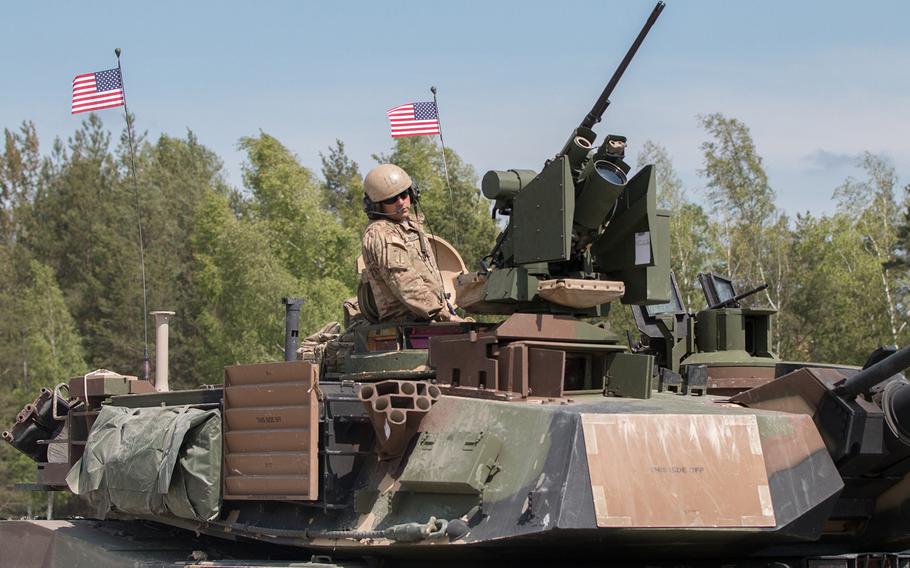 Buy Photo
An American tanker riding a M1A2 SEP Abrams battle tank heads to the firing range on Wednesday, May 11, 2016, as part of the 2016 Strong Europe Tank Challenge held at the Grafenwoehr, Germany, training area. The U.S. Army in Europe is moving more tanks and troops to the Continent, with plans next year for a heavy brigade to be on year-round loan from the States, adding a third full brigade to the two already in Europe. (Michael S. Darnell/Stars and Stripes)

This has been the summer of war games in Europe, where thousands of NATO troops have been on the move in a series of eye-catching military drills stretching from Poland to the Baltics and beyond.

The show of force is a prelude to a summit later this week in Warsaw, Poland, where alliance leaders will determine the future direction of the U.S.-led military pact.

The maneuvers aim to deliver a signal of readiness to Russia, whose 2014 annexation of Ukraine’s Crimean Peninsula upended assumptions about a post-Cold War partnership with Moscow. And yet they mask a persistent gulf between rhetoric and reality regarding NATO’s military capabilities along its eastern flank — a long-standing source of tension inside the organization and an issue allies will be forced to confront during the two-day summit, which begins Friday.

If the meeting is to be deemed a success, it will need to make headway in healing a rift between eastern and western member states over the force mix required to confront a more assertive Russia.

“I think NATO will have to decide if it has enough political will to put the resources in place that it needs to and send an unequivocal message it is united,” said Andrew A. Michta, a professor of national security affairs at the U.S. Naval War College. “(Russian President Vladimir) Putin sees Europe in flux.”

Indeed, the gap in military capabilities eastern Europe, and what should be done about it, is where allies appear to be most divided. If some members question whether NATO has done enough, others think allies have already gone too far.

German Foreign Minister Frank-Walter Steinmeier caused a major stir last month when he described such exercises — a source of celebration in the Baltics and Poland where American troop parades were met with applause — as unhelpful war-mongering.

But such differences are likely to be papered over in Warsaw. When President Barack Obama and other heads of state from the 28-nation alliance meet, the public declarations out of NATO will be about solidarity and unity in the face of security challenges posed by Russia.

NATO officials will likely restate a slew of talking points that have become familiar over the past year. These include the new security environment, which has prompted NATO’s largest reinforcement since the end of the Cold War; the new quick-reaction “spearhead force”; and a multinational response unit that has more than doubled to 40,000 troops.

“We now need to take the next steps. So at our summit in Warsaw, we will agree to further enhance our military presence in the eastern part of the alliance,” Stoltenberg said.

Still, table top-war games have shown Russia still outguns allies by a wide margin. The discrepancy has members like Poland and the Baltic states on edge and hungry for larger, long-term commitments from allies besides the four multinational battalions that will be deployed to those countries.

“At best, the deployment of four NATO battalions is an incremental step to strengthen deterrence that falls short of changing the calculus in Moscow,” wrote the Atlantic Council’s Jorge Benitez in an analysis of the summit. “At worst, they are evidence to Putin that NATO is so weak and divided, the allies can only muster consensus on tepid action.”

Such worst-case scenarios take into account of Russia’s large force — roughly 250,000 troops in its Western Military District bordering NATO — as well as advanced anti-aircraft weaponry and naval assets that could cut off NATO access to the region.

Germany’s Fulda Gap — an expanse of terrain thought during the Cold War to be the key point of battle with the Soviet Union — has been replaced as a source of fear by Poland’s Suwalki Gap, which Russian forces could, in theory, flood before a coherent allied response.

In response, U.S. Army in Europe is set to deploy more tanks and troops to the Continent, with plans next year for a heavy brigade to be on year-round loan from the States. That would add a third full brigade to the two already in Europe. The U.S. moves are part of a $3.4 billion package to train and reassure allies and deter Russia. U.S. European Command leadership has said the next step is to move from a headquarters designed for conducting training activities to one organized for “warfighting.”

“All of this is being tempered by the debates going on inside the alliance,” said Michta, who emphasized that his views weren’t official Navy War College positions. “It is better than before, but in terms of deterrence, I would contend we have a lot off work to do after the summit.”

Other analysts say NATO has been too focused on the Baltics, where any threat of conventional confrontation is remote.

“NATO’s biggest challenge is not the balance of forces, but the fact that its credibility is attached to every square meter of Baltic terrain,” wrote Russia analyst Michael Kofman in the online military journal War on the Rocks. Rather than brace for invasion by force, U.S. military planning should focus more on how NATO will respond if Russian troops attempted to grab a small patch of Estonia.

To avoid such a credibility test, NATO would be better off making clear that any move on its territory would mean a counterattack, but not necessarily directly at the allies’ point of weakness in someplace like Estonia, Kofman said.

“That means concentrating on the distinct advantages the United States has in the air and sea domains, rather than forward-basing ground forces.”