NATO’s once vital supply link to Afghanistan via Russia closes 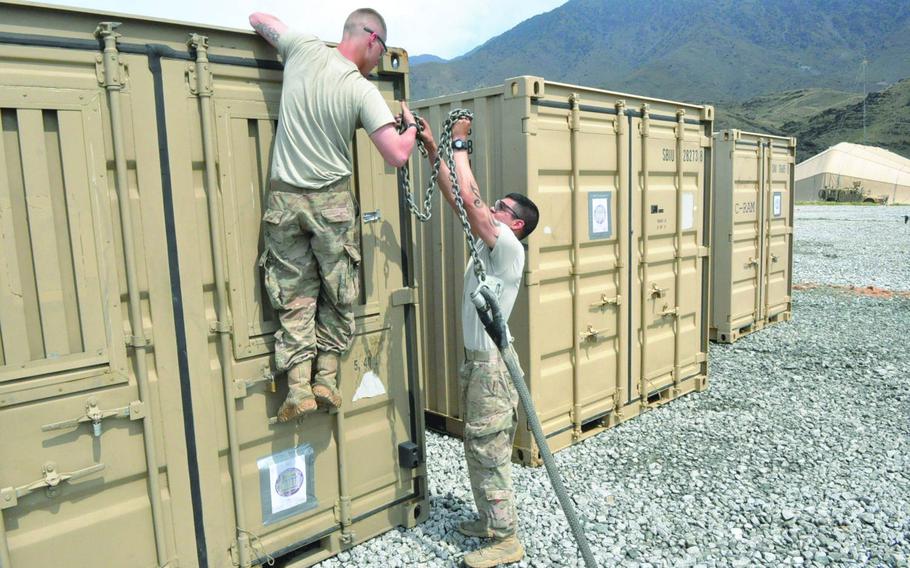 Buy Photo
Pfc. Ty Cummings, left, and Sgt. Lucas Strozak prepare a shipping container to be picked up by helicopter at Forward Operating Base Joyce in eastern Afghanistan in June 2013. When NATO officially wrapped up its combat operations and withdrew the bulk of international forces at the end of 2014, the alliance's transit agreement with Russia, comprising part of the so-called Northern Route, ended as well. (Josh Smith/Stars and Stripes)

KABUL, Afghanistan — A logistics route through Russia that carried as much as 40 percent of the supplies for NATO’s coalition at the height of military operations in Afghanistan has finally shut down.

The northern routes were more expensive than bringing supplies through Pakistan, but complicated relations between Washington and Islamabad often led to the shutdown of Pakistan routes for periods of time.

The agreement with Russia survived numerous ups and downs in relations between the West and Russia. But Moscow officially ended cooperation when the United Nations mandate for military operations in Afghanistan expired in December, NATO officials said.

The transportation agreement was set up under the U.N. framework that authorized the NATO-led International Security Assistance Force in Afghanistan, NATO spokeswoman Oana Lungescu said in a statement.

The network not only brought in large quantities of supplies, but it also played a key role in allowing coalition countries to remove massive amounts of equipment over the past few years as the international military presence in Afghanistan drew down.

With the U.N. mandate expired and the coalition’s transition to the new training-focused Resolute Support mission, the remaining forces are relying on other supply routes, Lungescu said.

“In light of that, NATO has not sought to extend transit arrangements with Russia ... or to negotiate new arrangements for Resolute Support,” she said.