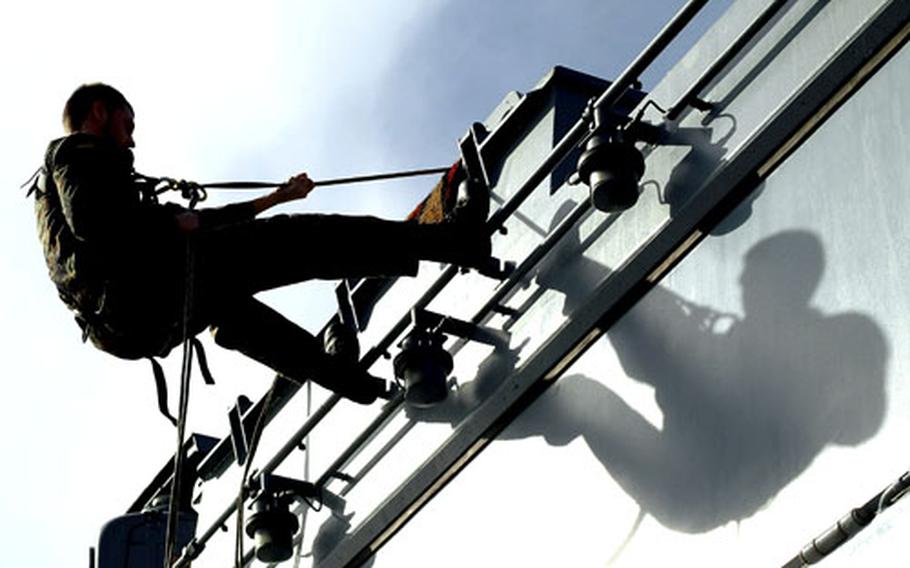 As part of NATO’s Operation Active Endeavour, a member of the German frigate FGS Schleswig–Holstein’s boarding team lowers himself on a rope from the ship’s hangar. The Schleswig–Holstein was the flagship of NATO’s Standing Naval Forces Mediterranean fleet. (Courtesy of NATOâ™s Allied Maritime Component Command)

The operation also saw a former NATO enemy, Russia, join the ranks in the hunt for terrorists in the Mediterranean Sea.

Though it launched with the humble duty of providing patrols and escorts for vessels transiting the Straits of Gibraltar and the Suez Canal, the operation steadily grew, and in October 2004, reached across the entire Mediterranean Sea to the Middle East.

In its five years of existence, more than 80,000 vessels of the roughly 1.5 million that have transited through the Med have been hailed and questioned, with 102 merchant ships boarded for inspections, said Italian Navy Cmdr. Massimo Daicampi, spokesman for NATO&#8217;s Allied Maritime Component Command Naples, headquartered on the small Italian island of Nisida, in the Gulf of Pozzuoli.

All NATO countries that have a Navy participate in the operation, starting from Poland through Norway to Bulgaria and Romania, Daicampi said.

In September 2005, the Russian frigate, Pytlivyy, became the first non-NATO ship to partner with multinational navies in patrolling the sea, and led the charge of having other non-NATO nations join.

Other nations that have trained with U.S. and NATO navies include Finland and Ukraine, and others still have expressed an interest in joining, including Algeria, Egypt, Israel, Jordan, Morocco and Tunisia.

Today, the participating navies focus on transiting vessels in waters near the Middle East in the mission designed to deter terrorist-based shipping from operating in the Mediterranean. But Active Endeavour also targets human traffickers, and drug and weapons smugglers, Daicampi said.

&#8220;The past five years have witnessed a tremendous growth in global interest over maritime security, a dynamic in which NATO&#8217;s Operation Active Endeavour has continually been at the forefront,&#8221; United Kingdom Royal Navy Rear Adm. Richard Leaman, chief of staff for NATO&#8217;s Allied Maritime Component Command Naples, recently wrote.