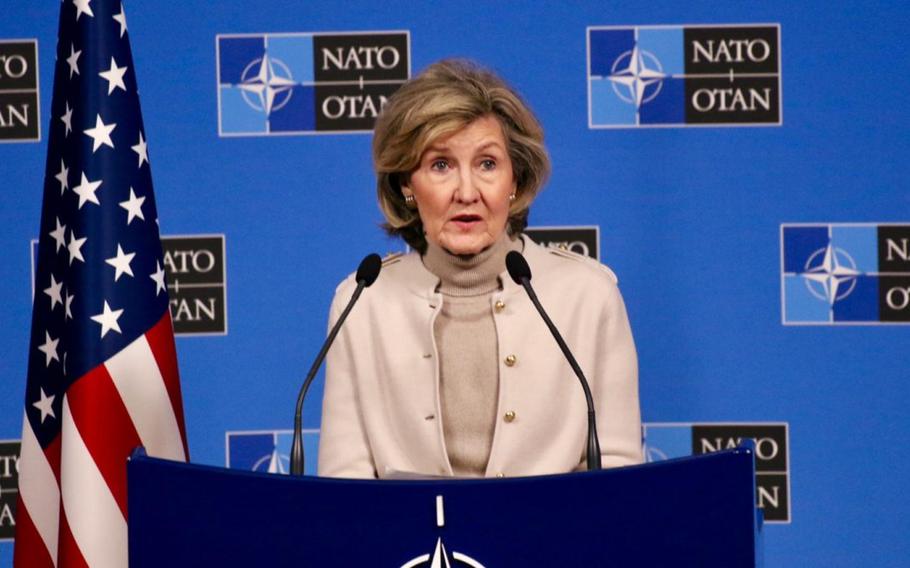 America’s top representative to NATO on Tuesday blasted comments by French President Emmanuel Macron that the 70-year-old alliance is “experiencing brain death,” saying an attempt to divide members is “not even rational.”

Macron suggested in an interview earlier this month that the European Union should do more on its own militarily, a view that NATO leaders rejected Tuesday.

“The thought of only one of our countries or one of our groups of countries facing the enormous risks to our populations alone is not even rational,” Hutchison said.

The ministerial talks come at a time of tension among the 29 member states, who will attempt to form a united front ahead of a leaders’ summit next month in London that will include President Donald Trump.

Allies are expected to adopt new measures aimed at countering Russia and China. They will likely agree to make outer space a new military domain for the alliance alongside air, land, sea and cyber, NATO Secretary-General Jens Stoltenberg said Tuesday.

“Space is essential to the alliance’s defense and deterrence, for early warning, communication and navigation,” Stoltenberg told reporters at the alliance’s headquarters in Brussels.

The alliance “will not weaponize space,” he said. “We will not deploy weapons in space,” but instead will protect the hundreds of satellites orbiting the earth that belong to NATO members.

NATO’s focus on space comes after the United States earlier this year set up a Space Command to deal with challenges posed by Russia and China, which could threaten satellites crucial to major military missions.

Among the allies’ concerns are the ability of Russia and China to jam GPS communication satellites and launch ground-based missiles that can destroy satellites.

But even as members attempt to project unity on issues like a more robust space defense strategy, they have been at odds on issues such as defense spending and the conflict in Syria.

Trump’s frequent criticisms of NATO have strained relations with longtime allies such as Germany, and Macron’s comments in an interview earlier this month have ratcheted up tensions once again.

“What we are currently experiencing is the brain death of NATO,” Macron told The Economist, placing the blame for the alliance’s decline largely on unilateral U.S. moves, such as Trump’s decision to withdraw from Syria. Macron also said Europe should do more on its own to allay concerns that America’s commitment to the alliance is waning.

Macron’s comments drew criticism not only from the U.S. but also from European allies, including Estonia and Germany.

Estonian President Kersti Kaljulaid on Friday said NATO “is the best system we have — the only system that can protect us all at the moment.”

And Stoltenberg warned against deepening divisions between Europe and the U.S. on security matters.

While he acknowledged that there are disagreements among members, Stoltenberg said NATO has a long history of working through its internal disputes.

“This leaders’ meeting is timely, not least because questions are being asked about the strength of the trans-Atlantic relationship,” he said.

Allies must remain united, he added, particularly as NATO faces new challenges, such as that posed by an increasingly assertive China. For the U.S., getting NATO to focus more on China has been a top priority.

Beijing is expanding its economic, development and military reaches globally, Stoltenberg said. “We see them in Africa, in the Arctic, investing in infrastructure in Europe and also in cyberspace,” he said. “So we need to assess the consequences for our security.”

But at the same time, the NATO secretary-general cautioned, the U.S. needs to “keep allies close” if it wants to effectively counter Beijing’s growing influence.