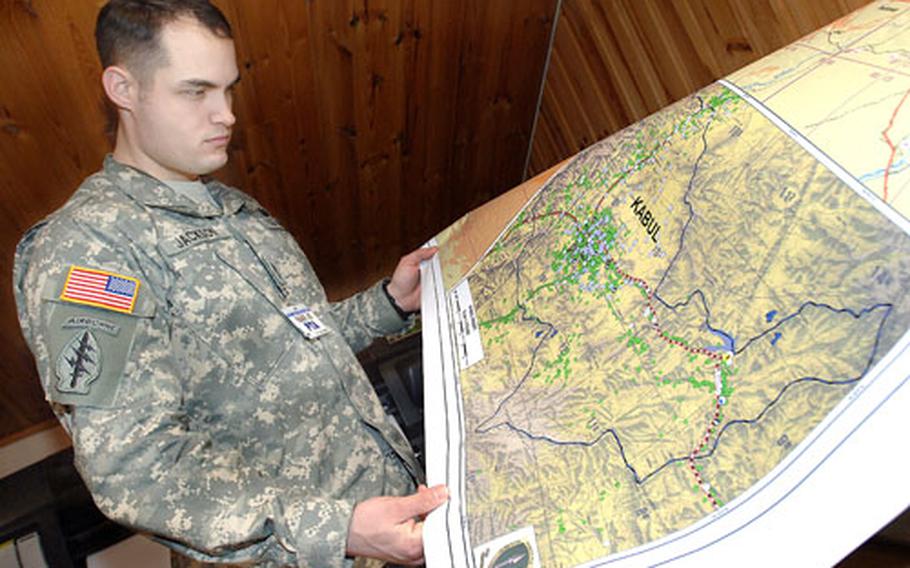 Sgt. 1st Class Todd Jackson is one of about three dozen Americans assigned to the NATO command set to deploy to Afghanistan in May. (Frank Proctor / Courtesy of Allied Rapid Reaction Corps)

The ARRC headquarters, made up of some 450 troops from 17 NATO nations, will preside over a transformation ending with all foreign forces in Afghanistan under one non-American command. The mission is both a historic broadening of NATO&#8217;s role and the first time since World War II that American combat troops will be commanded at a theater level by a foreign officer.

Some 40 Americans are assigned to the headquarters, filling a range of jobs.

Sgt. 1st Class Todd Jackson, for instance, is assigned to a cell that provides engineering capabilities and geographic research. Among the cell&#8217;s tasks is to provide &#8220;geographic intel,&#8221; or, terrain information that could help operational troops.

Jackson also serves as the senior enlisted soldier for the U.S. contingent, ensuring that American soldiers on a British-run base in Germany have as much access to benefits and promotion opportunities as their non-NATO American counterparts.

The unit is based in Rheindalen, Germany, on a British base. When it deploys, family members will be served by a smaller version of family readiness groups. Capt. Mike Belenky, who served a tour in Iraq with the 1st Armored Division, will stay in Germany and be the ARRC&#8217;s sole rear detachment member.

&#8220;We&#8217;ve got a good British support system the families can access, and the Army Community Services from Shinnen are completely involved,&#8221; he said, referring to the nearest U.S. base.

Lt. Col. Steven Eden, who has been assigned to the ARRC since July 2004, will function in Afghanistan as a liaison officer to the American-led Combined Joint Task Force-76.

His job, in nutshell, is to spot problems before they can occur between the two headquarters.

Lt. Col. Mark Smith will serve as chief of the ARRC&#8217;s Afghan National Security Forces advisory cell. While training Afghan forces in the field falls to another unit, the corps command will have liaison officers with the Ministry of Interior and Ministry of Defense.

&#8220;The ANSF cell is the one-stop shop for expertise on the security forces. We don&#8217;t get involved in operational or tactical decisions, but we feed information to the headquarters,&#8221; Smith said.