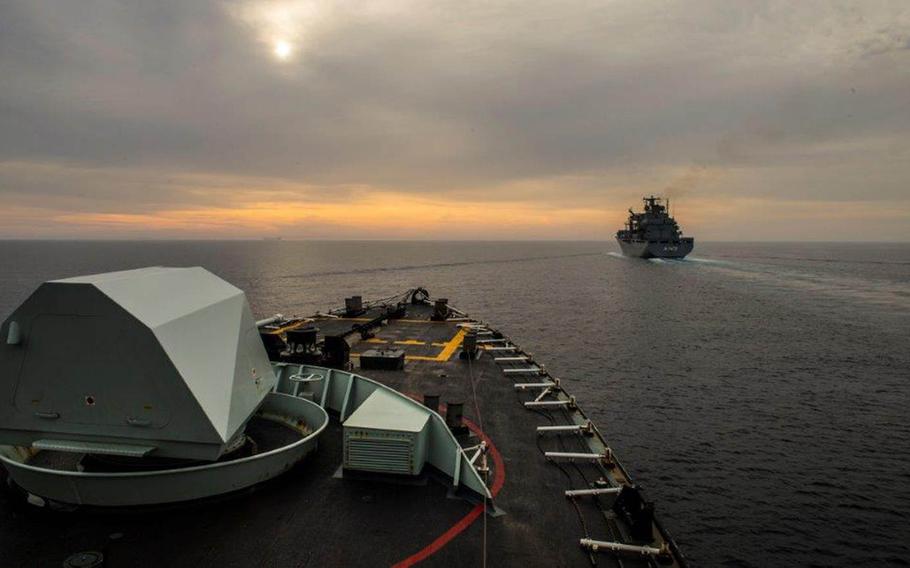 Units of Standing NATO Maritime Group 2 conduct drills as part of NATO's participation in the international efforts to cut the lines of illegal trafficking and illegal migration in the Aegean Sea, Feb. 20, 2016. The Dutch frigate HNLMS Van Amstel and the French corvette FS Commandant Bouan have joined the flotilla. Courtesy of NATO (Courtesy of NATO)

NAPLES, Italy — Two more warships have joined a NATO mission to stop smugglers bringing migrants across the Aegean Sea, an effort soon to extend south of the Greek island of Lesbos.

The United Kingdom also deployed two cutters to the mission and promised to send a third later this month.

The ships are working with the European Union border agency Frontex to provide surveillance and intelligence to Greek and Turkish coast guards patrolling for smugglers’ boats crossing from Turkey to the Greek islands. Thousands of migrants attempt the crossing daily, many of them Syrian refugees fleeing war and seeking asylum in the EU.

A challenge for the NATO ships is detecting smaller-sized vessels being used by some smugglers, who have been packing dozens of people onto small inflatable rafts that are “pretty hard to see,” Gen. Philip Breedlove, NATO supreme allied commander, said in an interview.

As the mission expands, more sophisticated ships are being incorporated, helping NATO to get better eyes on smaller boats or even rafts, Breedlove said.

“Clearly, the flotilla has a large space ... to cover right now,” Breedlove said. “And we are still working with allies to use the flotilla in all those spaces, so we have more work to do.”

The ships, which are equipped with radars and helicopters, have focused their operations in recent weeks around Lesbos, where A MAJORITY OF migrants land. But the ships will soon move south, according to the official, who was not permitted to speak on the record about the matter. The Greek islands of Chios, Samos and Kos have also seen high numbers of arrivals.

NATO defense ministers agreed to the mission in February in response to a joint request from Germany, Greece and Turkey, all nations burdened by the rise of illegal people trafficking across the Aegean. The ships are tasked with sharing information with local authorities and are not responsible for thwarting individual crossings.

The mission is one of several European efforts to stanch a flood of migrants entering Europe, many of them bound for Germany. Macedonia recently closed a key border crossing with Greece, stranding thousands of migrants trying to pass through the Balkans to northern Europe. Other countries along the migration route have erected new fences to prevent crossings.

EU officials are meanwhile backing a controversial deal pushed by Germany for Turkey to take back those not awarded asylum in EU countries.

Nearly 144,000 migrants have made the Aegean crossing so far this year, according to the International Organization for Migration. Another 9,500 have made the more dangerous crossing between Libya and Italy.