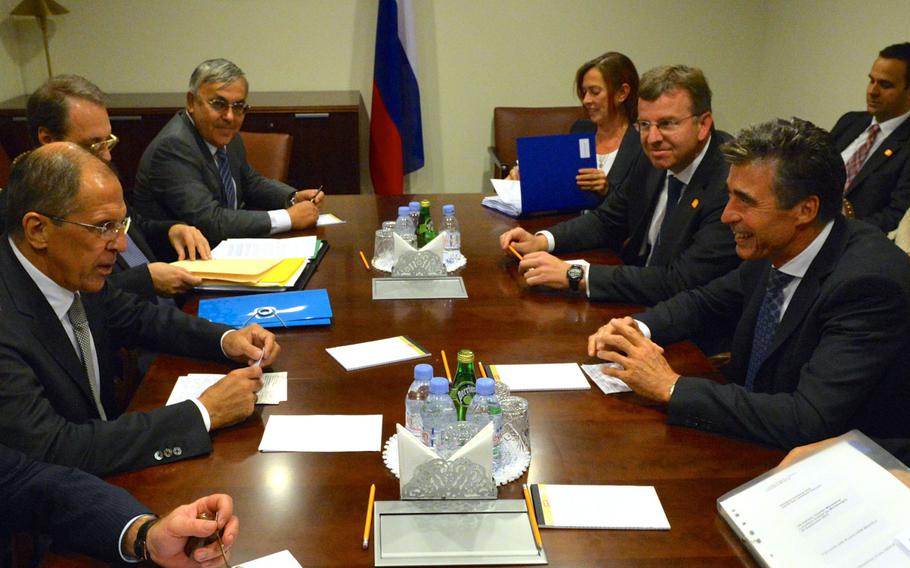 STUTTGART, Germany — Russia and NATO agreed Wednesday to work together to destroy thousands of outdated Cold War-era munitions in Russia’s Kaliningrad region even as they remain at loggerheads over key issues such as the alliance’s missile defense plans in Europe, NATO Secretary General Anders Fogh Rasmussen said.

The agreement to dispose of obsolete bombs, shells and other munitions “will make the environment safer for all those who live near these stocks of dangerous ammunition,” Rasmussen said. “And we will create the conditions for former military sites to be converted to civilian use.”

The agreement came on the second day of talks involving defense ministers from the 28-nation NATO alliance. Much of the focus in Brussels thus far has been on Afghanistan and the long-term security agreement between the U.S. and Afghanistan governing continued U.S. troop presence after combat troops depart by the end of 2014. Failure to seal the deal could derail NATO plans for a follow-on training mission in the country. Afghan President Hamid Karzai has said he will not sign the deal before April elections to choose his successor.

On Wednesday morning, however, NATO leaders and their Russian counterparts discussed areas of potential cooperation in Afghanistan and beyond, Rasmussen said, including mind disposal initiatives and programs aimed at countering roadside bombs. Russia and NATO so far have cooperated on logistical efforts in Afghanistan and in training Afghan counternarcotics agents.

“This will benefit our shared security. It will allow us to promote stability in Afghanistan, and thus in the Euro-Atlantic region. And it will allow us to improve the protection we give to our troops, our citizens and all those who are threatened by home-made bombs,” Rasmussen said.

While NATO and Russia have managed to cooperate in areas such as countering threats posed by piracy and terrorism, there remain deep divisions. Chief among them are NATO’s missile defense plans, which Russia considers a threat to its missile systems deterrent capabilities.

NATO counters that the shield is focused on protecting allies from possible missile threats from rogue states. While NATO does not mention specific countries, the U.S. has made no secret that its missile defense systems are mainly meant as a deterrent to Iran.

The Associated Press reported from Bussels that Russian Foreign Minister Sergey Lavrov, who participated in the ministerial meeting, said an international agreement reached with Iran last month to keep it from developing nuclear weapons, if fully implemented, would make a missile defense system in Europe unnecessary.

“As you know, we have invited Russia to cooperate on missile defense,” Rasmussen said. “So far, we haven’t seen much progress in negotiations or talks.”

The conflict in Syria also has been a sticking point between NATO and Russia. However, on Wednesday, both sides offered formal endorsement of the efforts of weapons inspectors in Syria, who are working to identify all the stockpiles of chemical weapons in the country.

“We underscore the importance of the complete and verifiable elimination of all chemical weapons, material and equipment in the safest manner,” Rasmussen said.

Lavrov told reporters that the inspections in Syria are proof that diplomacy is more effective in solving international disputes than military force.

“Political measures are much more efficient than any use of force and we believe that NATO comes to realize it more and more, and we hope that going forward we’ll cooperate effectively with U.S. and European partners,” Lavrov said.