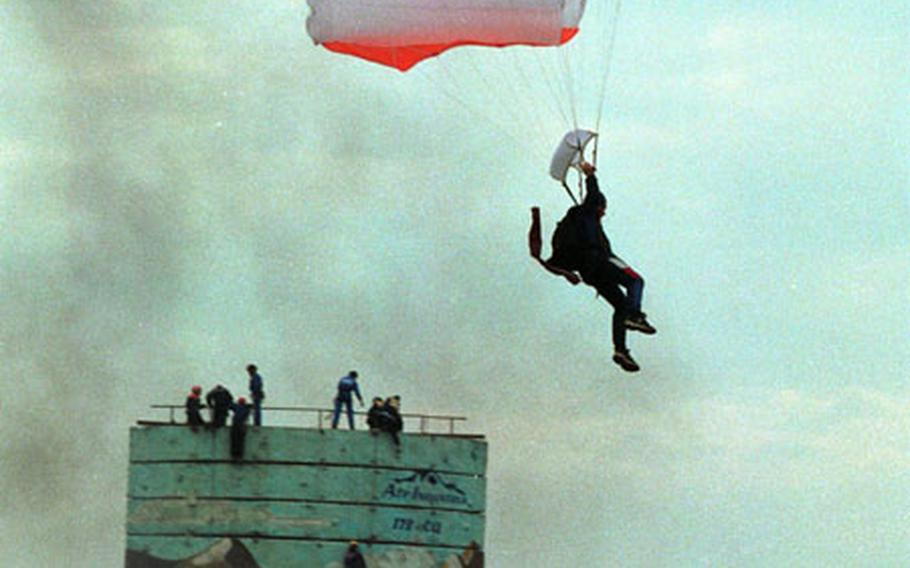 A paratrooper glides in during a NATO simulation of a search-and-rescue operation resulting from a chemical leak in Noginsk, Russia, in 2002. This week Russia hosts another NATO disaster exercise, this time in Kaliningrad, to drill in case of an attack on an oil platform. (Courtesy of NATO)

While the world worries following terrorist attacks on oil workers in Saudi Arabia and on pipelines in Iraq, NATO and Russia began simulations Tuesday of ways to react to a disastrous attack on an oil platform closer to Europe.

Some 1,000 civil emergency personnel, disaster experts and dignitaries from 22 nations are participating in Exercise Kaliningrad 2004, which continues through Friday. They converge on the Russian enclave to prepare for the horrific: an attack on an oil platform causing mounting numbers of dead and injured, a toxic spill and pleas for help from abroad.

The first phase consists of mock rescues performed by Russian, Polish and Lithuanian emergency teams. The second will be more theoretical, as experts discuss both the success of the first phase of the exercise and what to do in such situations in general. According to a NATO official, both the State Department and the Department of Homeland Security would represent the United States.

Though NATO drills can plan for and envision all sorts of crises, the oil scenario glows rather brightly on the alliance radar.

A NATO official, who asked not to be named, said the exercise had been planned about six months in advance, but that parallels to today&#8217;s terrorist attacks are no accident.

An alliance release stated &#8220;NATO and Russia, together with other partners, have put [the] fight against terrorism firmly on the priority list of their agendas.&#8221;

The scenario presupposes a nation&#8217;s oil infrastructure is attacked so severely that it will need to seek help from outside, in this case the Euro-Atlantic Disaster Response Coordination Center, based in Brussels.

Though the United States is not sending in ground teams during the simulation, it will lend expertise in the analysis realm. According to the NATO official, the American entourage is believed to include Alexander Vershbow, the U.S. ambassador to Moscow, as well as a high-ranking Homeland Security official. Tom Leary, spokesman for the U.S. Embassy, said the State Department was preparing a release on the exercise but it had not yet been cleared by press time.

Kaliningrad Oblast, an enclave of the Russian Federation, is geographically cut off from the rest of the nation by Lithuania and Poland. That&#8217;s a potential sore spot for Russia. When Lithuania joined NATO in April, it left the enclave surrounded by U.S. allies.

But the NATO official said the fact Russia would allow a NATO exercise there bodes well. During the Cold War, the city of Kaliningrad was a naval center sealed off from outsiders.

In the end, the official said, the mutual interest to fight terror together outweighs old distrust.