Working in real time, the video surveillance system from NATO's Stand-off Detection of Explosives program picks out a suspicious individual among the passengers in the corridors of a public transport building. An image of the person appears on the operator's screen. (Courtesy of NATO)

Working in real time, the video surveillance system from NATO's Stand-off Detection of Explosives program picks out a suspicious individual among the passengers in the corridors of a public transport building. An image of the person appears on the operator's screen. (Courtesy of NATO) Microwave sensors of the Stand-off Detection of Explosives program indicate that the person is carrying a suspicious item under their clothes. The advantage of the STANDEX technology is that detection is remote-controlled and does not disturb the flow of passengers. The person is unaware that they are under suspicion and so will not activate the explosive device immediately, NATO researchers say. (Courtesy of NATO) 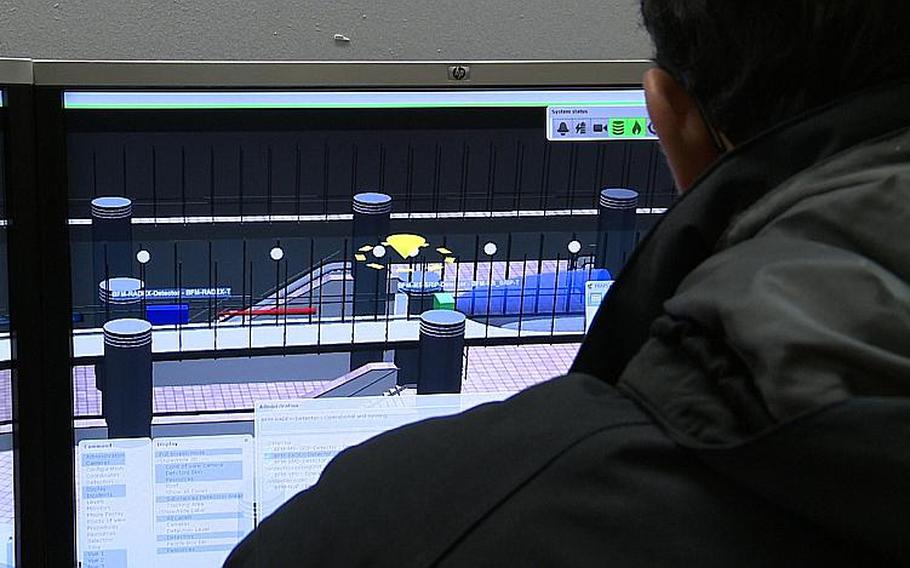 The operator of NATO's Stand-off Detection of Explosives program receives a warning from the data management system which controls the sensors that could help authorities detect people carrying bombs in crowded places. (Courtesy of NATO) 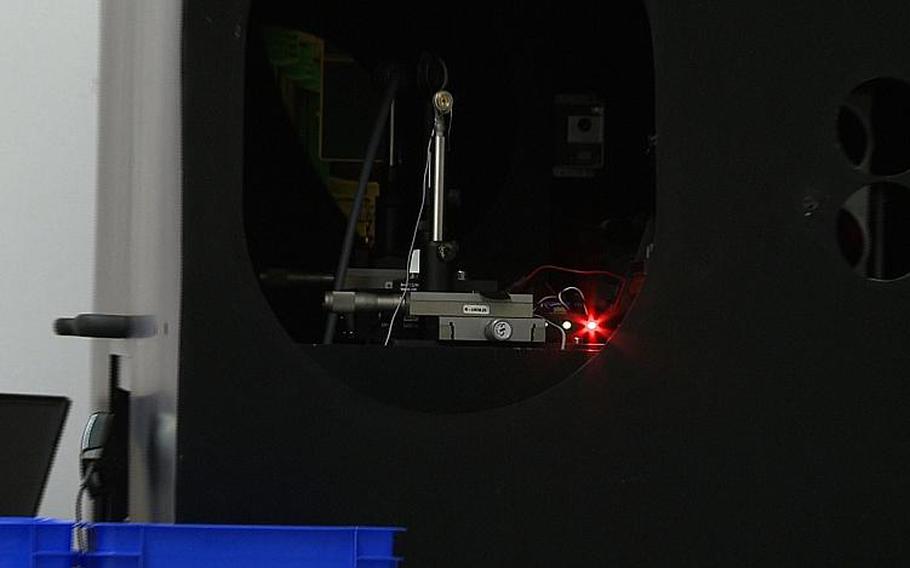 A laser system that is part of NATO's Stand-off Detection of Explosives program analyzes the traces of chemicals on their clothing to identify the exact nature of the threat. If traces of explosives are found and the threat is confirmed, the security services are automatically alerted. (Courtesy of NATO)

STUTTGART, Germany — It’s billed as a technological breakthrough, a ground-breaking step forward that could help authorities detect explosives remotely and unobtrusively in crowded venues such as train stations and sports stadiums.

While NATO and Russia are often at odds, the alliance and its former Cold War foe have come together to develop new technology that the two sides say is the first of its kind.

The project could help allies and Russia prevent terrorist attacks such as those carried out in recent years on public transit systems in London, Madrid and Moscow, according to NATO.

The alliance now wants the private sector to get involved, bringing the technology into the marketplace.

“We will show industry that we have a viable product. Industry can see what NATO has done and what they have to do therefore to commercialize it and make it usable. It has to be affordable,” Deputy Assistant Secretary-General Jamie Shea said in a NATO release.

During a live test in June, the technology was able to pinpoint a suspect armed with explosives in an unnamed underground railway station in a European capital city, according to NATO. No person-to person searches were required. Instead, the alert was activated by an innovative system that relies on various detectors to provide rapid, real time analysis in moving crowds such as sports fans or subway commuters. The system is based on sensors that can identify molecular structures associated with explosive materials.

The goal is to handover the technology to private industry by the end of October 2015.

The test in June marked the completion of the initial phase for NATO’s Stand-off Detection of Explosives program, known as STANDEX — the result of four years of collaboration between Russian and NATO experts.

NATO said the alliance and Russia now are planning a second phase for the project, which will focus on how emergency responders react once an explosives-carrying terrorist has been identified. The next round of tests is expected to take place in Russia.

Officials say the advantage of STANDEX technology is that it can be used in an array of environments, such as underground railway stations, airports and sports stadiums.

“We do not have to completely rethink the system in order to adapt it to meet requirements, and this is the really strong point of the STANDEX technology,” said project director Pierre Charrue.

Although NATO and Russia have not seen eye to eye on a series of international issues such as missile defense, NATO expansion and the civil war in Syria, they also have collaborated closely in other fields such as the Afghan war, naval anti-piracy patrols, and counter-terrorism.