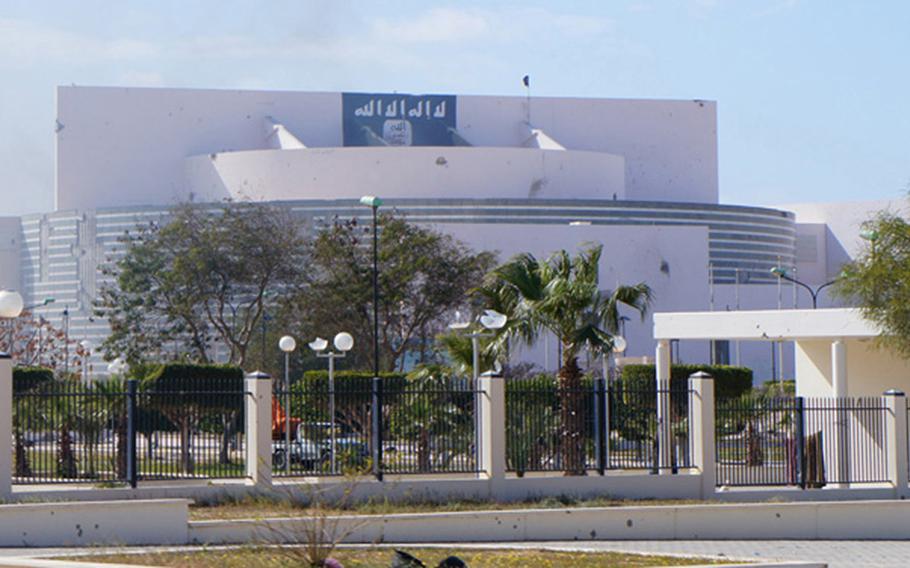 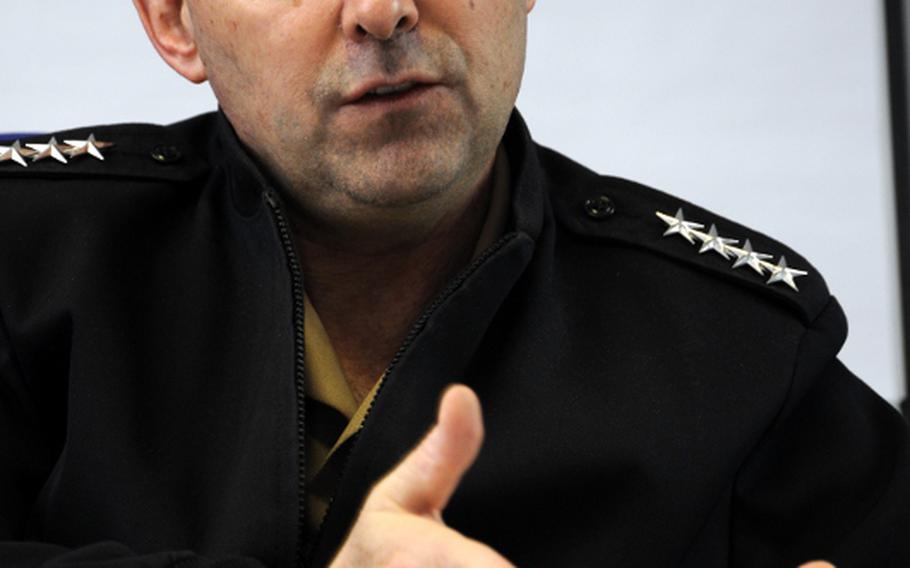 Buy Photo
James Stavridis, seen here while he was still in the U.S. Navy, is now retired from the military service. He led the military intervention in Libya. (Stars and Stripes)

As NATO announced the end of its seven-month bombing campaign in Libya that helped topple dictator Moammar Gadhafi, the top military officials expressed their pride in the alliance’s achievement.

“A successful chapter in NATO’s history is coming to an end,” Secretary-General Anders Fogh Rasmussen told Libya’s new leaders in Tripoli in October 2011, just days after rebels had caught and murdered a fleeing Gadhafi. Rasmussen said he expected a new Libya to arise, “based on freedom, democracy, human rights, the rule of law and reconciliation."

“We came, we saw, he died,” a triumphant then Secretary of State Hillary Clinton declared to a television reporter.

Four years after NATO’s “successful chapter,” Libya is in chaos, a failed state with two rival but powerless governments and dozens of warlords and militia groups fighting it out in the streets of its cities. The once-thriving oil-based economy — now a waypoint for tens of thousands of refugees from Africa and the Middle East fleeing to Europe — could be the radical Islamic State group’s next target.

“I think Libya is probably where ISIL most wants to gain a foothold,” Pentagon spokesman Col. Steve Warren said on Monday, using an alternative name for the Islamic State. “They probably have at this point gained at least a toehold in Libya based on the extraordinary amount of unrest and the almost completely deteriorated security situation.”

The West is now witnessing the effects of helping to topple a dictator in Libya without any plan to fill the power vacuum, experts say. The same issue could emerge in Syria if President Bashar Assad’s government falls to the rebels, many of them linked to al-Qaida or the Islamic State.

The ensuing chaos in Libya should have been predictable, said Patrick Skinner, a former CIA case officer who now manages special projects for the Soufan Group, a New York firm that provides security and intelligence analysis services.

“I tend to be sympathetic to governments that have to make hard decisions, but coming on the heels of the Iraq War, where we learned what a power vacuum was, I probably have less sympathy in this case,” Skinner said.

In Libya, NATO’s intervention started amid concerns that Gadhafi’s forces were poised to carry out a large-scale slaughter of rival tribal groups. But in time, it turned into a broader effort to help rebel fighters eliminate the regime with NATO carrying out 9,600 airstrikes during the seven-month campaign. That’s more than double the number of strikes in the ongoing U.S.-led operation against the Islamic State in Iraq and Syria.

While experts and policymakers disagree about Gadhafi’s intentions and whether an actual slaughter of civilians was about to take place, there is broad consensus that the West’s declarations of victory were premature, revealing a lack of awareness about the complexity of a post-Gadhafi Libya. The murder of U.S. Ambassador Christopher Stevens at a diplomatic facility on Sept. 11, 2012, underscored how quickly conditions deteriorated and the extent to which Libya had become a terrorist haven.

“I think it is fair to say there was a premature sense of triumphalism, and that this was a clean intervention,” said Frederic Wehrey, a senior associate in the Middle East Program at the Carnegie Endowment for International Peace.

Although the U.S. was eager to hand off much of the post-intervention responsibility to the Europeans — France was a prime advocate for the intervention — the Libyans themselves were a complicating factor, resisting ideas of international support or a stabilizing force, experts say.

“I think all sides bear some culpability,” Wehrey said.

In the intervention’s aftermath, heavy weapons once belonging to the old regime flooded out of Libya and into the arms of militants stretching from Syria to Mali and Nigeria. Many fighters the West hoped would emerge as pro-democracy forces proved to be religious militants.

Today, the country remains a hub for arms and human trafficking.

The battlefield has become far more complex since 2011, with two competing governments — as well as militias and now the Islamic State group — all pursuing their own agendas.

Retired Adm. James Stavridis, NATO’s former supreme allied commander, who led the military operation, said at the time of the intervention that it wasn’t clear who all the rebels were that aimed to overthrow Gadhafi.

“In those pre-Arab Spring days, there was not serious intelligence or analysis to Islamic radicalism,” said Stavridis, now dean of the Fletcher School at Tufts University. “If we recall the U.S. experiences in Afghanistan, where we backed what evolved into the Taliban, it is not dissimilar. When you are undertaking complex operations, the natural tendency is to focus on the mission at hand — such was the case in Libya.”

Today, high-profile attacks by the Islamic State, such as the beheading of Egyptian Christians in February and the recent slaughter of about 30 Ethiopian Christians in Libya, are indications of the group’s intent to bolster its profile in the country.

There also are growing concerns about militants mingling with migrants transiting Libya. Stavridis says NATO should consider increasing the presence of warships in the Mediterranean as a precaution.

“A big concern would be ISIS radicals entering the EU via the large numbers of migrants. This is an easy, open door to Italy, which would be a very attractive target to ISIS given the presence of Rome, the pope, and other highly evocative elements of the Catholic/Christian faith,” he said, using an abbreviation for the Islamic State group.

Although it’s likely to make further inroads into Libya, the Islamic State group faces unique challenges that could make it difficult for the militants to match the gains it they achieved in Iraq, according to experts. The Islamic State has been able to exploit sectarian Sunni-Shiite rivalries in Iraq, but in Sunni-dominated Libya there aren’t the same sectarian rifts. As Sunni foreign fighters have flocked to Iraq to take up arms against the Shiite-dominated government of former Prime Minister Nouri al-Maliki, Libya doesn’t necessarily present the same worldwide call to arms.

The one advantage the Islamic State has is brand recognition that could serve as a lure for disaffected Libyan youth.

There also are other troubling developments as fighters from neighboring states creep onto the scene. Jihadists from Algeria, Sudan and Tunisia are among the recent arrivals.

“That’s another scary development that concerns me a lot,” said Mattia Toaldo, a Libya expert with the European Council on Foreign Relations.

The Islamic State also could serve as a magnet for former Gadhafi regime members, he said. In Iraq, such a scenario has been a part of the group’s success as former Iraqi officers under Saddam Hussein play a key advisory role on the battlefield.

“There have been signs that the rank-and-file members of the former regime have shown a willingness to join ISIS,” Toaldo said. “That’s another scary development because they have the expertise in the field. It is fair to say ISIS in Libya has big potential.”

Still, with limited financial resources inside Libya — Islamic State doesn’t control any of Libya’s oil wealth — the group continues to operate more as a criminal gang than a group attempting to establish a formal state, Toaldo said.

“It’s unclear to me what’s next for them. They don’t have substantial revenue so they can’t provide services,” said Wehrey, the Carnegie associate. “They haven’t been able to tap into societal grievances yet.”

For its part, NATO still argues the military mission in Libya was a success, though officials acknowledge more should have been done by the United Nations and European Union to stabilize Libya and rebuild its political institutions in the wake of Gadhafi’s 42-year-long dictatorship.

“It was about protecting civilians against attacks from the regime; NATO fulfilled that (U.N.) mandate with unprecedented precision,” a NATO official, who spoke on condition of anonymity because he wasn’t authorized to comment, said on Wednesday. “There should have been more follow-up, more presence of the international community after the military operations ended in 2011. However, ultimately it is up to the people of Libya to build a new Libya.”

Stavridis also said he has no regrets.

“Gadhafi was overthrown not by NATO, but by his own people. He reaped what he sowed after half a century of brutal dictatorship,” he said.