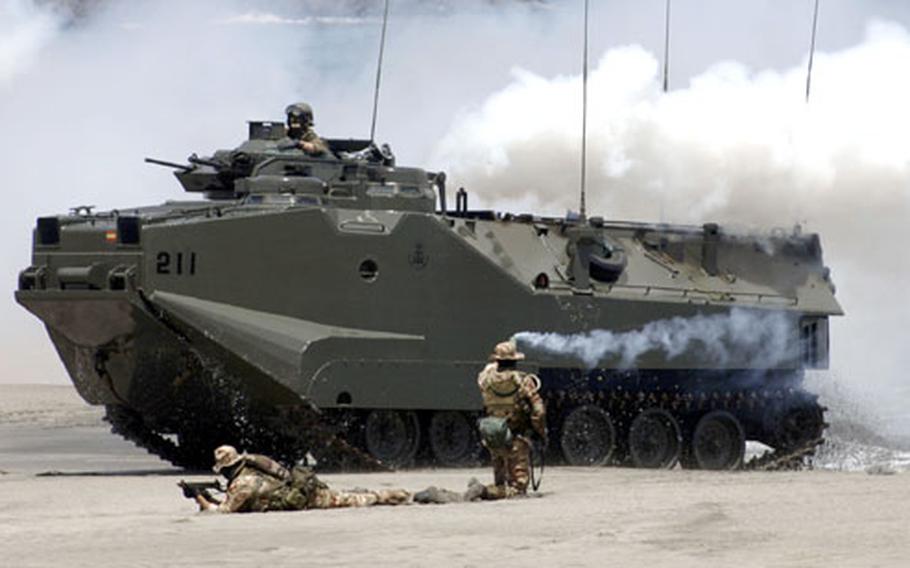 Spanish troops land on the Cape Verde Islands, off the coast of Africa, during exercise Steadfast Jaguar. The exercise, which ended Wednesday, was the NATO Response Force’s final exercise before it becomes operational in October. (Courtesy of Supreme Headquarters Allied Powers Europe)

The validation officially readies the force for its October 2006 stand-up and will allow the organization to deploy up to 25,000 troops anywhere in the world within five days for anything from humanitarian missions to combat operations, according to a NATO press release.

&#8220;This was important in that it was a &#8216;proof of concept&#8217; for the response force,&#8221; French Lt. Col. Patrick Poulain, exercise spokesman, told Stars and Stripes. The exercise proved that NATO can move a large body of multinational forces into action on short notice, he said.

A NATO joint task force headquarters element, which commanded the exercise, operated from the Gaeta, Italy-based Mount Whitney. Mount Whitney was designed to serve as an at-sea command-and-control platform.

Ground forces were under the command of the French Eurocorps, Spain commanded the maritime component, and the air element came from the NATO Air Component Command at Ramstein Air Base, Germany.

The Cape Verde Islands were chosen to host the exercise, according to the press release, specifically because of its location away from the European continent.

Poulain said that eight cargo ships brought more than 600 vehicles and 800 shipping containers of supplies to support the troops.

The exercise included a scenario which included a &#8220;show of military force&#8221; and then relief operations following the eruption of a volcano on one of the islands.

Poulain said the relief operation exercise involved moving about 3,000 troops to the island.