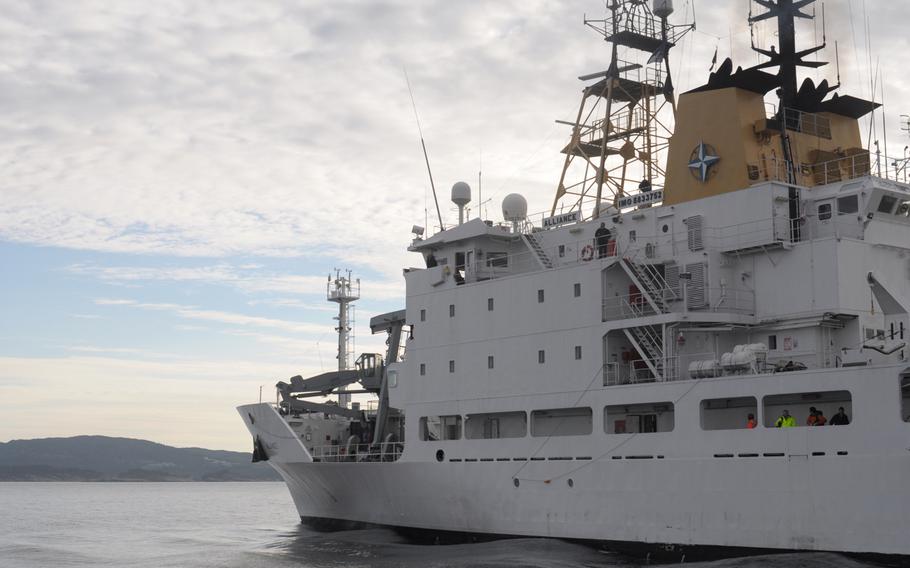 Buy Photo
The NATO research ship NRV Alliance operates off the coast of Norway on May 5, 2015, as part of the anti-submarine warfare exercise Dynamic Mongoose. Based out of La Spezia, Italy, the Alliance is testing autonomous underwater vehicles capable of searching for submarines and other submerged objects. (Steven Beardsley/Stars and Stripes)

Buy Photo
The NATO research ship NRV Alliance operates off the coast of Norway on May 5, 2015, as part of the anti-submarine warfare exercise Dynamic Mongoose. Based out of La Spezia, Italy, the Alliance is testing autonomous underwater vehicles capable of searching for submarines and other submerged objects. (Steven Beardsley/Stars and Stripes) 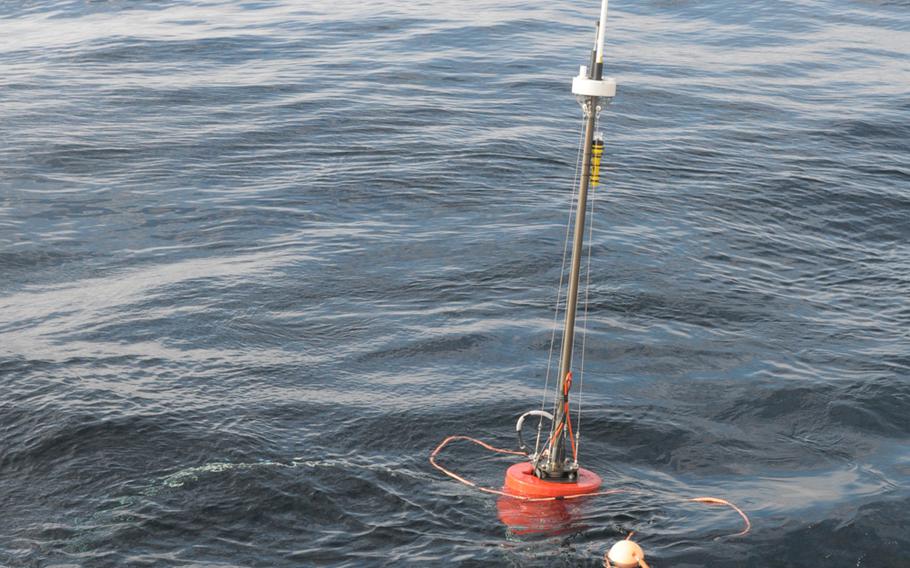 Buy Photo
A sonar buoy launched by the NATO research ship NRV Alliance extends the reach of an autonomous underwater vehicle, collecting data through an underwater acoustic modem and relaying it to the ship by radio signal. The Alliance is testing the vehicles off the coast of Norway as part of the NATO exercise Dynamic Mongoose in May 2015. (Steven Beardsley/Stars and Stripes) 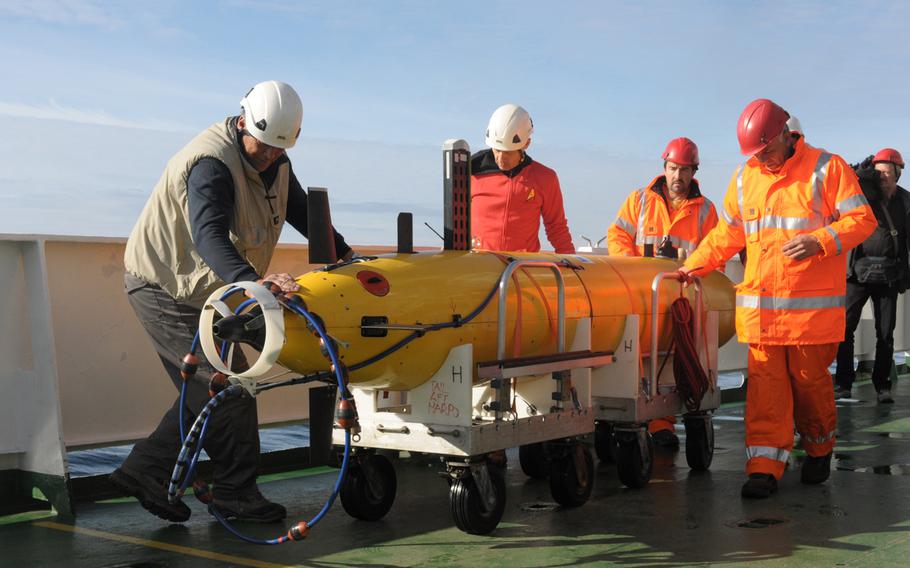 Buy Photo
Crew members of the NATO research vessel NRV Alliance prepare to launch the first of two autonomous underwater vehicles in the North Sea off the coast of Norway on May 5, 2015. Programmed to track objects moving underwater, the devices are being tested by NATO's Centre for Maritime Research and Experimentation as part of a NATO anti-submarine warfare exercise, Dynamic Mongoose. (Steven Beardsley/Stars and Stripes) 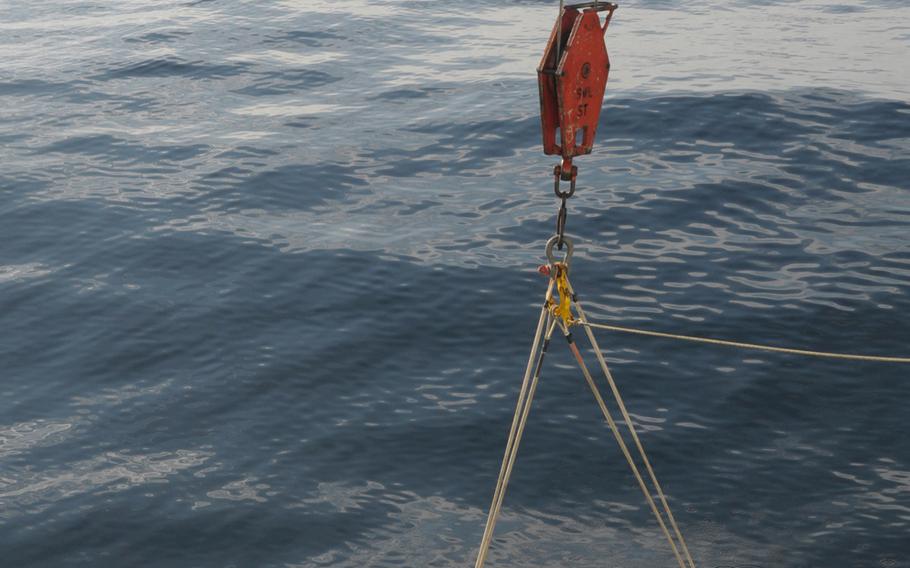 Buy Photo
The first of two autonomous underwater vessels operated by NATO's Centre for Maritime Research and Experimentation is lowered into the North Sea off the coast of Norway on May 5, 2015. Programmed to track objects moving underwater, the devices are being tested as part of the NATO anti-submarine warfare exercise Dynamic Mongoose. (Steven Beardsley/Stars and Stripes) 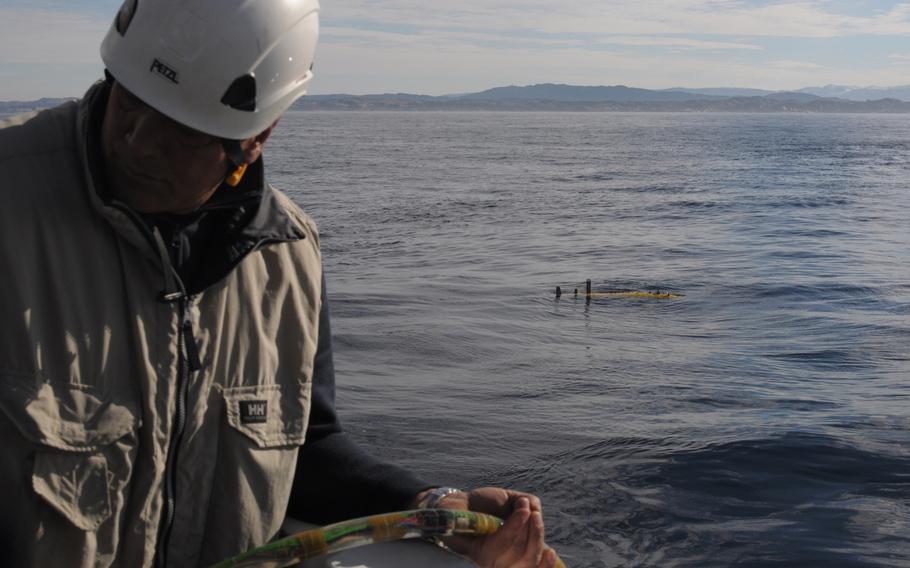 Buy Photo
A crew member of the NATO research vessel NRV Alliance feeds a hydrophone cable into the water during the deployment of an autonomous underwater vehicle (pictured in the water). The hydrophone is a listening device that trails behind the AUV to pick up echoes from sound waves projected into the water by the Alliance. The ship and its detachment of scientists from NATO's Centre for Maritime Research and Experimentation in Italy are testing several AUVs in the North Sea off the coast of Norway as part of an anti-submarine warfare exercise called Dynamic Mongoose. (Steven Beardsley/Stars and Stripes)

ABOARD THE NRV ALLIANCE IN THE NORTH SEA — At first glance it resembles a torpedo — a sleek metal cylinder with a propeller and what appears to be a dorsal fin.

Yet the device lowered into the frigid waters off the western coast of Norway by the crew of this 3,200-ton research vessel is no weapon; it’s a robot, programmed to search for submarines with little guidance from its operators. Part of a NATO project based in Italy, it is an early version of the kind of unmanned, autonomous technology many believe to be the future of anti-submarine warfare.

“Really, the advantage of autonomy is a human doesn’t have to be there,” said Ryan Goldhahn, the lead scientist behind the project. “It’s ideal in dangerous or denied places.”

Goldhahn works at NATO’s Centre for Maritime Research and Experimentation, a civilian program started by the alliance in 1959 to study the science behind hunting submarines. His team is embarked on the NRV Alliance — NRV stands for NATO Research Vessel — for almost two weeks to test several autonomous underwater vehicles, or AUVs, during an annual anti-submarine exercise off the coast of Norway.

Researchers hope that by adapting to the region’s rocky, cold waters, the vehicles will be able to distinguish geological features from anomalies like submarines. Their aim is to have NATO members use the devices in exercises in five years, and they hope to provide a seedbed of information for alliance members developing and deploying their own AUV programs.

The first step for the team was making the trip north from Italy, where the center conducts most of its AUV research. The decision was driven by the “operational relevance” of the northern region, researchers said, an oblique reference to increased Russian activity in the area and a new emphasis on submarine detection.

Last week Finland dropped depth charges to warn a foreign craft detected in its waters. Swedish maritime forces spent several days searching for a suspected submarine last year. Neither government has named Russia, but they have left little doubt of where their suspicions lie.

“We wanted to come up north because we know this is a very favorable environment for submarines,” said Kevin LePage, a research director at the NATO research center. “We know it’s also oceanographically challenging.”

Those challenges include a coastline marked by fjords, the deep inlets whose rocky slopes extend far into the waters; cold temperatures and a relatively low salinity, both of which affect sound; and marine life such as whales and large fish.

The team is testing three different AUVs. Two rely on precharged batteries for daylong operation below surface. A third, smaller vehicle, known as a wing glider, uses surface wave motion to power its roving. All use sonar to track potential targets and communicate progress back to the ship. Buoys dropped in the area extend a vehicle’s range through use of acoustic modems tuned to the vehicle, which gather information that can be relayed to the ship quickly via radio signal.

Although an AUV may resemble an unmanned air drone, it cannot be operated in real time like a drone. Sound is slower than electromagnetic waves by several magnitudes, making for delays between the vehicle’s projection of data and its reception back on the ship.

“(The AUV) operates autonomously because it has to,” said Goldhahn.

The vehicles are programmed to sift the sound data they receive — essentially, reflections of sound off objects — by assigning values for each response. They can then use that information to track an object according to parameters chosen by shipboard operators.

An AUV can track several objects at once, which researchers can map back at the ship. By overlaying the vehicle’s input with transponders from known ships or submarines, they can see how effectively the vehicle is determining targets to pursue and adjust accordingly.

When the vehicle is done for the day, it surfaces and emits a transponder signal. A GPS device — which looks like a dorsal fin — is used to guide the device when surfaced and before it dives.

The goal for researchers is to prove concepts for allies interested in better submarine detection, at a fraction of the cost of new submarines. They say the future is to network these vehicles and improve their capabilities to the point where submarines of the future may even be dronelike.

“One thing I expect to see is unmanned submarines doing surveillance,” said LePage, the research director.

The technology is still young, however, and improvements are necessary. Battery life is still limited. Advances in processors and improved data links will be crucial.

For now, researchers are just happy to be testing at sea. They’ll seek to get as much from the exercise as possible, LePage said, because funding for such missions is limited. The culminating event will be working with a submarine to test their vehicles’ tracking abilities.

“We’ve been waiting for this for about a year and a half, and we’re finally here,” said LePage “I’m curious what we’ll see.”