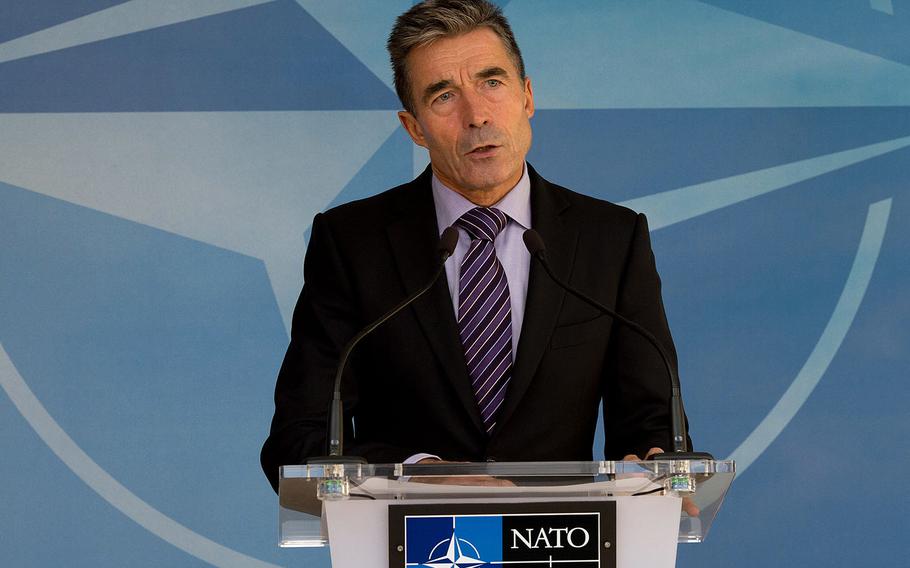 NATO Secretary General Anders Fogh Rasmussen speaks after a meeting of the NATO-Ukraine Commission in Brussels on Friday, Aug. 29, 2014. (NATO)

NATO’s top official accused Russia Friday of following a “dangerous pattern” of intervention in Ukraine intended to destabilize that country.

NATO convened an emergency meeting a day after Ukrainian and NATO officials said Russian troops and equipment had crossed into Ukraine.

“Despite Moscow’s hollow denials, it is now clear that Russian troops and equipment have illegally crossed the border into eastern and southeastern Ukraine,” NATO Secretary-General Anders Fogh Rasmussen said at his headquarters in Brussels. “This is not an isolated action, but part of a dangerous pattern over many months to destabilize Ukraine as a sovereign nation.”

On Thursday, NATO’s Supreme Headquarters Allied Powers Europe released a series of satellite images showing the apparent movement of Russian forces into Ukraine. That, coupled with other accounts, has left little doubt that Russian forces are operating in the country.

“Russian forces are engaged in direct military operations inside Ukraine,” Rasmussen said. “Russia has fired on Ukraine from both Russian territory and within Ukraine itself.”

Russia has denied such activity.

Moscow also continues to supply pro-Russian separatists with tanks, armored vehicles, artillery and rocket launchers while it maintains a combat-ready force just across the border in Russia, Rasmussen said.

“This is a blatant violation of Ukraine’s sovereignty and territorial integrity. It defies all diplomatic efforts for a peaceful solution,” he said.

The meeting in Brussels was called at the request of Ukraine, a non-NATO member.

At NATO’s 2008 summit in Bucharest, Romania, Ukraine and the alliance had agreed that the country would one day be a part of NATO if certain reforms were made. But in subsequent years, Kiev elected not to pursue NATO membership. Rasmussen said the door to NATO remains open. Whether Ukraine could achieve membership is another matter.

On Friday, Kiev proposed to end Ukraine’s nonaligned status and to renew its pursuit of NATO membership. Under the leadership of ousted President Viktor Yanukovych, the country had rejected NATO membership.

As a rule, countries engaged in territorial disputes are generally unable to achieve membership in the 28-member alliance. Germany and other allies are leery of adding more countries along Russia’s border, which is one reason Georgia remains out of the alliance despite years of attempting to join.

But Rasmussen said the question is for Ukraine to decide.

“We fully respect Ukraine’s decisions as regards Ukraine’s security policy and alliance affiliations,” he said. “I’m not going to interfere with political discussions in Ukraine.”

The alliance is expected to beef up its support for Ukraine in areas such as training and logistics. However, NATO has no plans for direct military involvement in Ukraine.

Western political leaders, including President Barack Obama, have emphasized there is no military solution to the crisis.

Instead, both the U.S. and European Union have opted for scaled sanctions. European Union foreign ministers met Friday in Italy to discuss the bloc’s response to the situation in Ukraine ahead of an EU summit Saturday in Brussels.