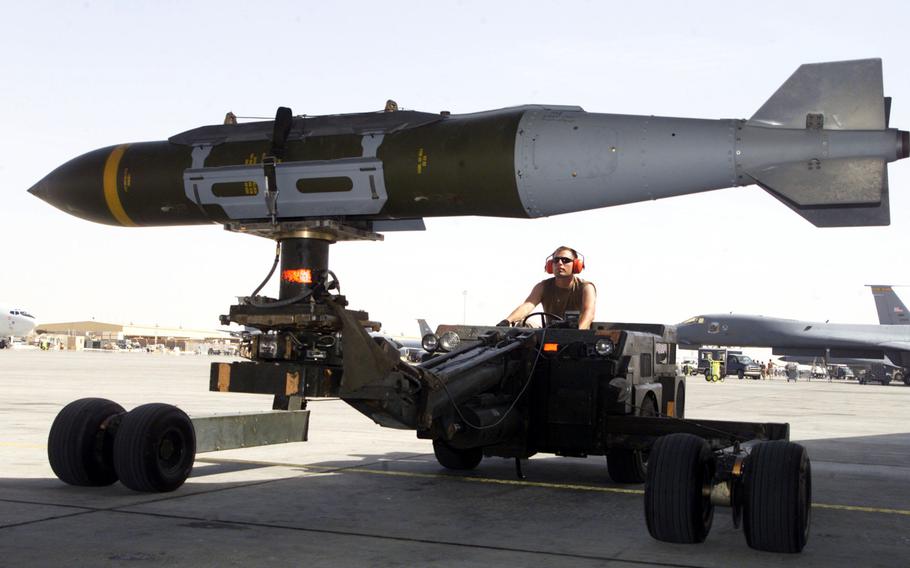 A weapons loader prepares a GBU-31 joint direct attack munition for a mission. On Wednesday, Aug. 22, 2018, the NATO Support and Procurement Agency received its first lot of precision-guided munitions, which will be delivered to Belgium and Denmark as part of an alliance project to build up stockpiles. (Jessica Kochman/U.S. Air Force)

STUTTGART, Germany — Precision-guided munitions, long in short supply among some NATO members, are being stockpiled in Europe in a move designed to reduce dependence on the U.S. in a crisis.

Belgium and Denmark will receive the first deliveries of the U.S.-made air-to-ground weaponry acquired for about $20 million, NATO said in a statement Wednesday.

Eleven allies and one partner nation — Finland — are involved in the project, which is designed to be a more cost-effective way for members to increase their stockpiles.

“Working through this NATO initiative, rather than individually, allows Allies to draw upon each other’s PGM stocks in case of need: during air operations or in a possible crisis,” NATO said in a statement. “This will also help NATO and allies to reduce dependence on the U.S. for air missions.”

The 11 NATO members involved in the effort are Belgium, the Czech Republic, Denmark, Greece, Hungary, the Netherlands, Norway, Poland, Portugal, Spain and the United Kingdom. It was the first direct U.S. sale to NATO’s Support and Procurement Agency, which will distribute the weapons to participating states and allow partner nations to pool their resources.

“This initiative seeks to address a problem that NATO first encountered during the Libya Operation: when some Allies ran out of their stockpiles of munitions, they found it incredibly difficult to use those of other air forces,” Rose Gottemoeller, NATO deputy secretary general, said in a statement. “We realized that we needed a new, flexible approach to the provision of air-to-ground precision-guided munitions. I am happy that this approach is now delivering its first results.”

The alliance statement did not specify which types of munitions were delivered in the first batch. But the original order, estimated at $231 million, included JDAM bomb kits, DSU-38/B sensors for use with laser guidance, elements of the GBU-12 and GBU-49 bomb units and other gear.

NATO has been seeking greater standardization among the diverse arsenals of its members since the alliance was formed 70 years ago. This included not only major weapons systems like warplanes, ships, tanks and artillery, but also the ordnance used by member forces.

During NATO’s bombing campaign in Libya in 2011, the European allies quickly ran out of laser-guided and other precision bombs.

Although the United States offered to replenish their stocks, American munitions were not compatible with some of the coalition’s strike planes participating in the attacks and could not be used. The French, for instance, had to use concrete training bombs against ground targets until they were issued replacement smart bombs.

NATO said it is developing similar initiatives for building up stocks of land and maritime precision-guided munitions.

Slobodan Lekic contributed to this story.