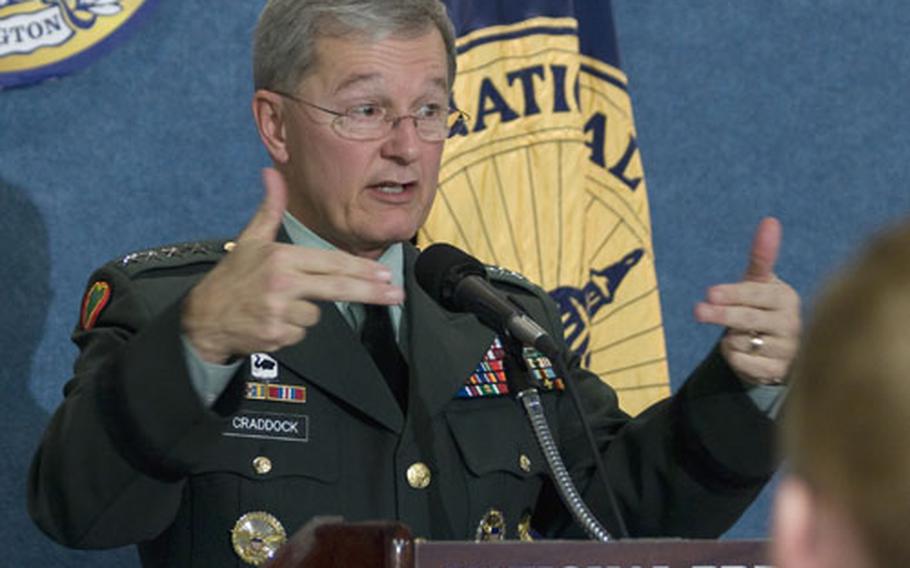 WASHINGTON &#8212; Additional NATO troops are on standby for a Kosovo deployment if negotiations on the status of the province lead to violence, Army Gen. John Craddock, supreme allied commander, Europe, said Tuesday.

Speaking to reporters at the National Press Club, Craddock said NATO leaders have been busy planning for the Dec. 10 end of the &#8220;troika talks,&#8221; that could determine whether Kosovo will be independent or remain part of Serbia.

But if the current NATO force can&#8217;t quell any violence resulting at the conclusion of the talks, &#8220;We are postured very well with reserve forces,&#8221; Craddock said.

Craddock would not identify the KFOR reserve forces for &#8220;operational&#8221; reasons, either by nationality or by size of the force.

But he said they &#8220;are routinely exercised. We have done so within the last several months and we continue to do so.&#8221;

KFOR moved into Kosovo with 50,000 troops after the end of a 78-day bombing campaign against Serbia launched by the alliance in March 1999, in an attempt to prevent the mass slaughter of the ethnic Albanians in the region.

Eight years later, NATO remains because the status of the province is unresolved.

Many Kosovo residents, mostly ethnic Albanians, want the province to be independent.

But to date, Serbia has adamantly opposed releasing the province to self-rule.