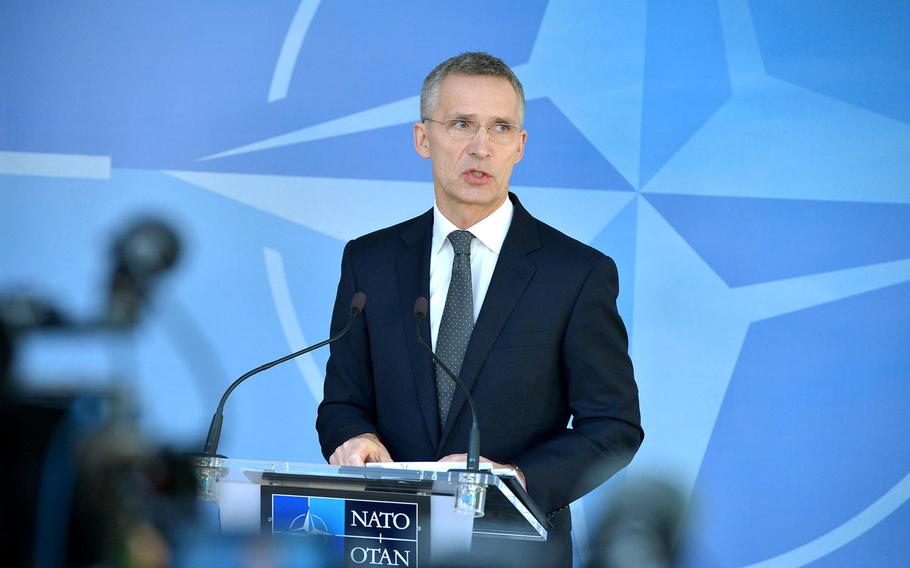 NATO Secretary-General Jens Stoltenberg speaks to the press at NATO headquarters in Brussels on Wednesday, Feb. 15, 2017. (Courtesy of NATO)

BRUSSELS — NATO was set to approve a plan Wednesday for a new anti-terrorism hub in Naples, Italy, which will serve as a focal point for monitoring threats growing along the alliance’s southern doorstep, NATO’s top official said.

“This will help us to coordinate information on crisis countries such as Libya and Iraq, and help us address terrorism and other challenges stemming from the region,” Secretary-General Jens Stoltenberg said at the start of two days talks with NATO defense ministers.

The plan is part of an effort by NATO to strengthen its role in combating terrorism, a key area of concern for President Donald Trump, who has criticized allies for not doing enough against such threats.

During the conference, Stoltenberg will convene with Defense Secretary Jim Mattis and other allies, who will be under pressure to boost their defense spending. The failure of many European allies to spend 2 percent of their gross domestic product on military matters — a NATO benchmark — has emerged as a point of contention for Trump.

Mattis, in a brief statement Wednesday, called NATO a “fundamental bedrock for the United States,” offering comments aimed at reassuring some allies who have grown concerned about Trump’s stated desire for closer cooperation with Russia.

Still, allies must do more, he said.

“It is a fair demand that all who benefit from the best defense in the world carry their proportionate share of the necessary cost to defend freedom," Mattis said. “We should never forget it is ultimately freedom that we defend here at NATO.”

Stoltenberg said he is convinced “the United States will stay committed to the trans-Atlantic partnership.”

The meeting of defense ministers is the first since Trump’s election and comes as Russia appears to be testing the new administration, whose team is now in flux with the sudden resignation Monday of national security adviser Mike Flynn.

Several Russian aircraft buzzed a U.S. destroyer on Friday in the Black Sea, maneuvers that were deemed “unsafe and unprofessional” by the ship’s commander, according to U.S. European Command.

Reports also have emerged that Russia has deployed a new cruise missile system that would amount to a violation of a treaty that bans land-based intermediate-range missiles.

Stoltenberg declined to comment on the reported deployment, calling it an intelligence matter. However, he said any such missile system would pose a threat to Europe.

“What I can say is any noncompliance of Russia with the INF treaty (Intermediate-Range Nuclear Forces Treaty ) would be a serious concern for the alliance,” Stoltenberg said.

“The Department of Defense has made very clear our concerns about Russia’s violation, the risks it poses to European and Asian security, and our strong interest in Russia returning to compliance with the treaty,” said Lt. Col. Michelle L. Baldanza, a Pentagon spokeswoman. “We support a review of Russia’s ongoing INF Treaty violation in order to assess the potential security implications for the United States and its allies and partners.”

Russia has denied it violated the treaty. Kremlin spokesman Dmitry Peskov said Wednesday that Moscow continues to honor the 1987 accord that bans land-based systems.

“Nobody officially accused Russia of violating the INF treaty,” said Peskov, as quoted by the Russian news agency Sputnik. “Of course Russia was and remains committed to its international obligations, including in the framework of the agreement.”