NATO officials: Movement of separatists’ weapons in Ukraine must be watched 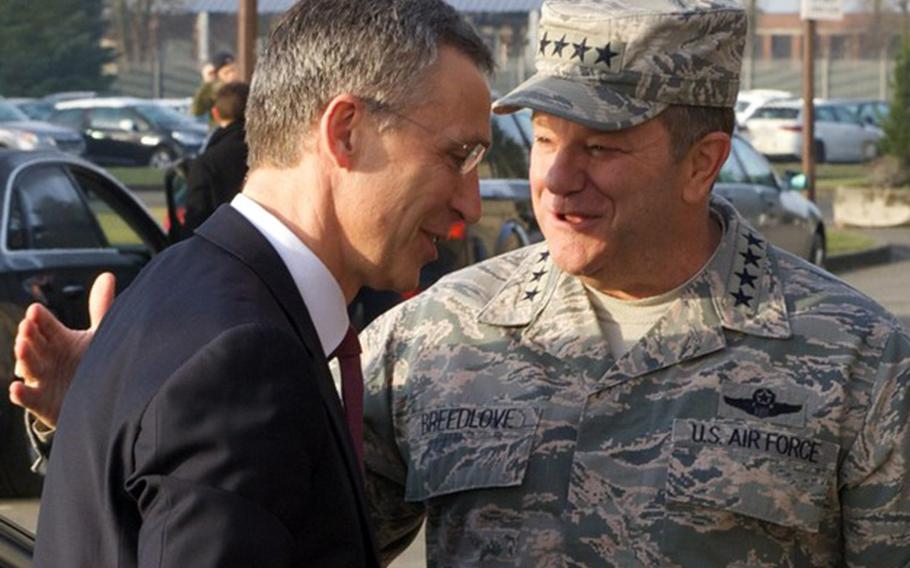 MONS, Belgium — A fragile cease-fire in eastern Ukraine appears to be holding, but international monitors must be allowed to observe where Russian-backed separatists are taking weapons they are removing from the front, top NATO officials said on Wednesday.

“We have seen the withdrawal of some heavy weapons, but it’s unclear what’s the destination of the weapons that have been withdrawn,” NATO Secretary-General Jens Stoltenberg told reporters. “And it’s important that this withdrawal of heavy weapons is complete and that it is verifiable.” There are concerns, he said, that separatists could simply be repositioning those weapons for future use.

Concerns that Ukrainian forces lack the materiel to counter the advanced weaponry NATO officials say Russia has delivered to the separatists have led to calls on the Obama administration to provide Ukrainian forces with lethal defensive weapons.

In a call with Ukrainian President Petro Poroshenko, Vice President Joseph Biden on Wednesday said the U.S. would provide “additional nonlethal U.S. security assistance to Ukraine,” according to a White House statement.

German Chancellor Angela Merkel, who together with French President Francois Hollande, was instrumental in brokering the latest cease-fire last month, has been a vocal critic of any effort to send lethal aid to Ukrainian forces, saying it would worsen the violence.

Stoltenberg and NATO Supreme Allied Commander Gen. Philip Breedlove insisted at a joint news conference that it was crucial to give observers with the Organization for Security and Cooperation in Europe full access to observe enforcement of the cease-fire.

“The monitoring of the cease-fire is in no way sufficient today,” Stoltenberg said.

Without full monitoring, Breedlove said, there is no knowing where the weapons have been moved. “Have they moved back across the Russian border?”

“Right now we do not know what is happening on that border because it is pretty much wide-open,” Breedlove told reporters at Supreme Headquarters Allied Powers Europe in Mons.

The latest cease-fire, reached with Russia’s backing, calls for heavy weapons to be pulled out of designated areas.

But questions about its durability persist. Equipment continues to flow between Russia and separatist-held territory in Ukraine, Stoltenberg said. Moscow has repeatedly denied supporting the rebels.

Russia’s offensive to seize Crimea from Ukraine a year ago and its continued support for the separatists in the east have spurred NATO nations to work more closely and nimbly to be better prepared to respond if Russia acts against NATO’s eastern allies.

To that end, the alliance aims to increase the size of a NATO Response Force from 13,000 to 30,000 troops, Stoltenberg said. Carved out of that force will be a new unit of 5,000 troops, who can conduct operations with 48 hours’ notice.

Moscow, which denies that it poses a threat to any NATO nation, has condemned the alliance’s moves, saying they showed that it now viewed Russia in the same way it had viewed the Soviet Union. Last week, Russia’s deputy defense minister accused NATO of using the Ukraine crisis to move its forces closer to Russia’s borders.

The spearhead force, which NATO refers to as a Very High Readiness Joint Task Force, already has reached interim capability and will be tested by allies in a series of exercises later this year.

The force will enable NATO to place boots on the ground during the early stages of a crisis, NATO officials said. In particular, it could be helpful in countering irregular “hybrid” operations, such as the deployment of troops without national insignia or other infiltrators to create unrest. NATO has accused Russia of carrying out such techniques in eastern Ukraine with its “little green men.”

If such provocations occurred in another eastern European state, deploying a spearhead force during the early stages “would send a very clear message,” a NATO officer at SHAPE told reporters at a subsequent background briefing where officials spoke on condition of anonymity. “That changes the deterrence calculus for a would-be aggressor.”

NATO also is pressing forward with six reception bases in eastern Europe, which could be up and running by the end of the year. Those bases — in Poland, Lithuania, Latvia, Estonia, Bulgaria and Romania — will be small and lightly staffed, serving as staging areas for rapid-reaction forces and other rotating units.

Also planned is a major exercise, Trident Juncture, which will be held in October and will involve 25,000 NATO troops, NATO officials said. Planned before fighting erupted in eastern Ukraine, it will be NATO’s largest exercise in recent years and will test the alliance’s crisis-response ability. The training has been modified in the wake of the Ukraine crisis, incorporating NATO’s new spearhead force.

In addition to events in Ukraine, NATO has been concerned about the rise of the Islamic State group in Iraq and Syria and growing support for the group in Libya, just across the Mediterranean Sea from Italy along NATO’s southern flank.

“Threats from both the east and the south have prompted a re-examination of our security strategy,” Breedlove said. “They will make our alliance even more ready and responsive in the future.”