NATO may contribute AWACS to fight against Islamic State 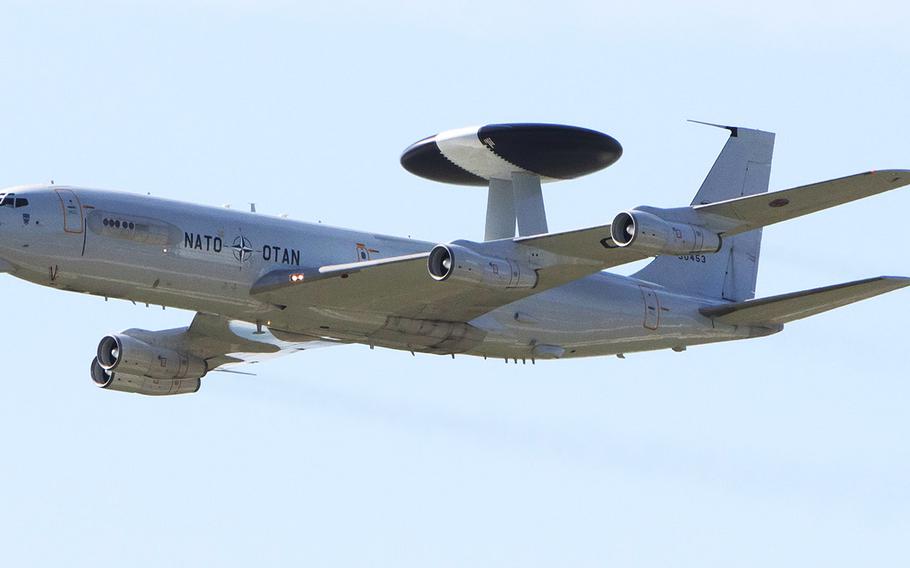 A NATO AWACS E3-A aircraft, during a fly-by at the end of the opening ceremony of Exercise Trident Juncture at Trapani Air Base, Italy, in October, 2015. (Joint Force Command Brunssum)

NATO will likely support a U.S. request for alliance surveillance aircraft in the fight against the Islamic State in Syria and Iraq, NATO’s top official said Tuesday ahead of two days of ministerial talks in Brussels. The alliance also will consider a possible role in monitoring the flow of refugees pouring out of the region.

The U.S. has asked that NATO Airborne Warning and Control System aircraft join the fight against the Islamic State, which would serve as the first formal involvement of the 28-nation alliance in the U.S.-led campaign.

“And I expect we will address this issue at the ministerial meeting tomorrow (Wednesday) and the day after tomorrow, as this would increase the coalition’s ability to conduct air strikes against ISIL,” NATO Secretary-General Jens Stoltenberg said Tuesday, using an acronym for the Islamic State group.

On Wednesday, allies will meet for two days of talks on issues ranging from NATO’s beefed-up posture in eastern Europe to dealing with the unfolding refugee crisis emanating out of Syria and north Africa.

Also on Tuesday, Stoltenberg talked with Turkish Defense Minister Ismet Yılmaz about a possible NATO role in monitoring the large movement of refugees, mostly from Syria, that has strained Turkey’s capacity to accommodate them, as well as burdening countries in Europe, where they are fleeing.

Stoltenberg did not offer details on what kind of support NATO might be able to provide, but there has been discussion of NATO vessels patrolling the eastern Mediterranean, a route used by some Syrian migrants fleeing for Europe. NATO surveillance aircraft, both manned and unmanned, could have a role as well.

“We will take very seriously a request from Turkey and other allies to look into what NATO can do to help and cope and deal with the crisis,” Stoltenberg said.

In recent days, thousands of Syrians fleeing fighting have been massing near Turkey’s border as Russian-backed Syrian government forces push toward Aleppo, a rebel stronghold. Stoltenberg blamed Russia for exacerbating the crisis by backing government forces and thus undermining efforts to reach a cease-fire.

“The intense Russian air strikes, mainly against opposition forces, are undermining these efforts,” Stoltenberg said. “They are driving tens of thousands of people to Turkey’s border, and making a desperate humanitarian crisis even more desperate and even worse.”