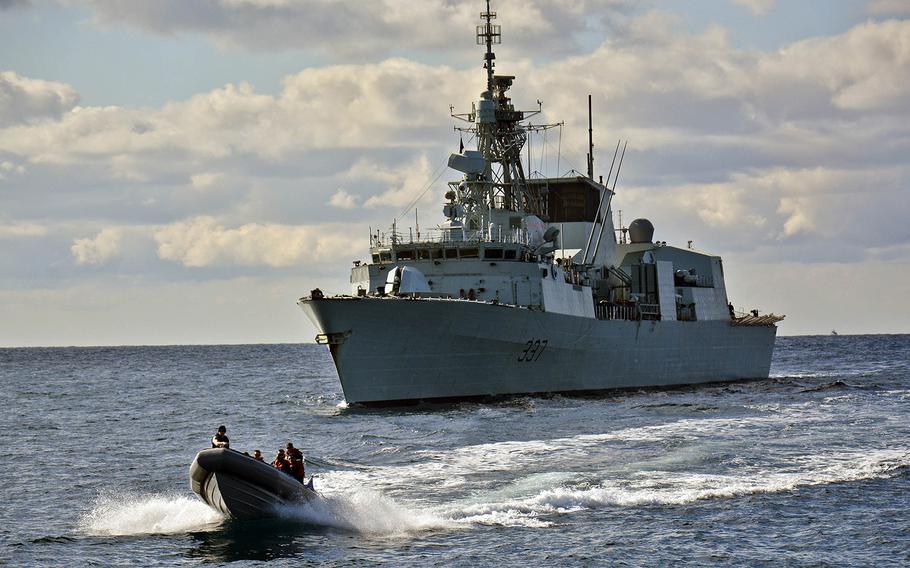 NAPLES, Italy — International warships assigned to a U.S.-led NATO maritime group entered the Black Sea on Wednesday to train with alliance members in the region.

The arrival of the Standing NATO Maritime Group 2 continues a string of visits to the region by the U.S. and its allies over the past year — a response to Russia’s annexation of Crimea last year and its support of separatists in eastern Ukraine. The American destroyer USS Cole left the Black Sea in late February.

Six ships make up the current group,one of two immediate-reaction forces under the alliance’s maritime arm. The group is commanded by U.S. Navy Rear Adm. Brad Williamson, who is embarked with his staff on the guided-missile cruiser USS Vicksburg.

The ships will train with NATO member counterparts from Bulgaria, Romania and Turkey, NATO said in a news release. Exercises will focus on anti-submarine and anti-air-warfare and defending small boat attacks.

The visit is the second by a NATO maritime group to the Black Sea in the past year and follows an exercise in September with American and Ukrainian navies. For that visit, three members of the group entered the Black Sea.

The maritime groups groups often exercise with counterparts across the alliance, and they rotate participation in NATO’s anti-piracy operation, Ocean Shield.

During its latest tour, the maritime group 2 has made stops in Italy and Croatia and participated in NATO’s post-9/11 counterterrorism mission, Operation Active Endeavor. The group also exercised with the French aircraft carrier Charles de Gaulle, which was on its way to Middle Eastern waters for participation in airstrikes against the Islamic State group.

The U.S. and NATO have sought to reassure allies in the Black Sea region after Russia’s annexation of Crimea, where Russia maintains a critical naval base in Sevastopol. The U.S., in particular, has increased its visits to the Black Sea, which provides Russia’s only access to the Mediterranean Sea and is home to Russia’s Black Sea fleet.

U.S. warships, which previously made only sporadic visits, now enter the region almost monthly. Russia has responded to the visits with more aggressive flight operations.

The other ships in the NATO maritime group are the Canadian frigate HMCS Fredericton, the Turkish frigate TCG Turgutreis, the German tanker FGS Spessart, the Italian frigate ITS Aliseo, and the Romanian firgate ROS Regina Maria.