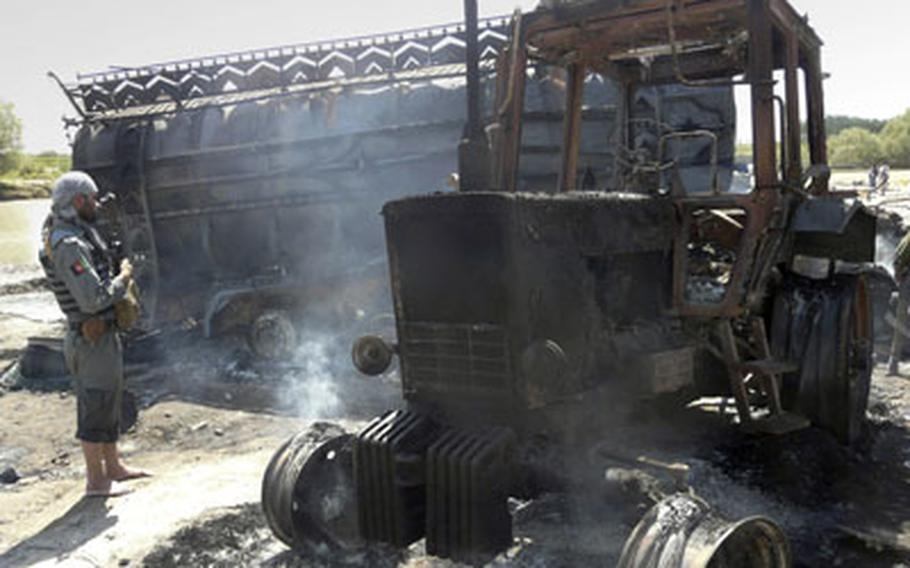 KABUL &#8212; NATO said Friday that it was investigating an airstrike on two fuel tankers hijacked by Taliban fighters in northern Afghanistan that some Afghan officials said killed dozens of civilians &#8212; the latest deadly incident that threatens to complicate the international military mission inside the embattled nation.

The airstrike, which U.S. and German officials confirmed was carried out by an American jet called in by a German forward air controller, killed more than 70 people, local Afghan authorities said. Among the victims were civilians who had gathered to collect fuel from the tankers after they were hijacked and got stuck on a muddy riverbank.

German officials, who spoke to The Associated Press on condition of anonymity as a matter of policy, said the strike took place 40 minutes after the commanders requested it and an unmanned surveillance aircraft determined no civilians were in the area. It was unclear whether civilians began to assemble during that time.

NATO said a "large number of insurgents" were killed or injured in the bombing, which took place in the pre-dawn hours Friday on a riverbank near the village of Omar Khel, in Kunduz province north of Kabul, about five miles southwest of a small German military base.

The airstrike occurred as U.S. Gen. Stanley McChrystal, the overall commander of U.S. and NATO forces in Afghanistan, and other senior officials are trying to minimize civilian casualties and turn around the faltering war effort.

In an interview on Thursday, only hours before the Kunduz airstrike, the top noncommissioned officer for U.S. and NATO forces in Afghanistan said the use of airstrikes and night raids had been sharply curtailed.

"[This] is a sign of how we are changing how we fight," Command Sgt. Maj. Michael T. Hall told Stars and Stripes. "We are not perfect, and mistakes will be made, but hopefully, the new procedures will keep incidents to the bare minimum."

A German defense spokesman told reporters on Friday that German officials were not aware of any civilians killed in Friday&#8217;s airstrike.

But he added: "We assume almost all killed people were insurgents."

NATO and Afghan authorities have started an investigation, according to a written statement.

"While the attack was clearly directed at the insurgents, ISAF will do whatever is necessary to help the community, including medical assistance and evacuation as requested," said Brig. Gen. Eric Tremblay, NATO spokesman, in the statement. "ISAF regrets any unnecessary loss of human life and is deeply concerned for the suffering that this action may have caused our Afghan friends."

"It is not clear yet," Yaqubi said. "We are still investigating."

The Associated Press, quoting other local Afghan officials, reported that as many as 70 people had been killed, including as many as 40 civilians.

Prior to Friday, Hall said, the last time Afghan civilians had been killed by bombing from NATO jets was in May. In July, at least five civilians were killed and seven wounded after a helicopter struck insurgents with rocket and cannon fire in Zabul province, according to NATO forces.

The alliance says that 106 Afghan civilians have been confirmed killed and 82 wounded in the past 12 months. But the United Nations reported last month that at least 40 airstrikes had killed 200 civilians during the first six months of 2009. While acknowledging that steps have been taken to minimize deaths, the U.N. said &#8220;airstrikes remain the largest cause of civilian deaths&#8221; attributable to NATO and Afghan forces.

"We will not win simply by killing insurgents," says the six-page document, published last week. "We will help the Afghan people win by securing them, by protecting them from intimidation, violence and abuse, and by operating in a way that respects their culture and religion. This means that we must change the way we think act and operate."

Instead, U.S. and NATO forces will refocus their efforts on denying insurgents control of key populated areas and diminishing insurgents&#8217; influence over the Afghan people.

"If we take away the things they want, we win," Hall said. "If we push them away from the cities they occupy and control, we win, and we don&#8217;t have to kill them."

Yusuf Massoud and Marcus Kloeckner contributed to this story.