A Spanish sailor aboard the Numancia looks through a pair of binoculars as the frigate escorts a trio of U.S. military cargo ships in the Strait of Gibraltar. (Scott Schonauer / S&S)

A Spanish sailor aboard the Numancia looks through a pair of binoculars as the frigate escorts a trio of U.S. military cargo ships in the Strait of Gibraltar. (Scott Schonauer / S&S) 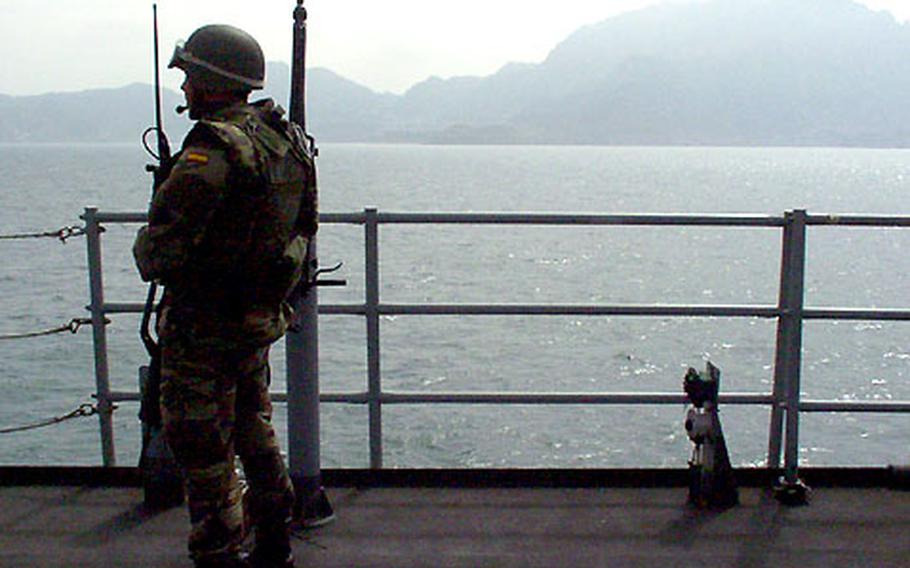 A Spanish sailor stands guard on the frigate Numancia as it escorts a trio of U.S. military cargo ships in the Strait of Gibraltar. Morocco is in the background. (Scott Schonauer / S&S) 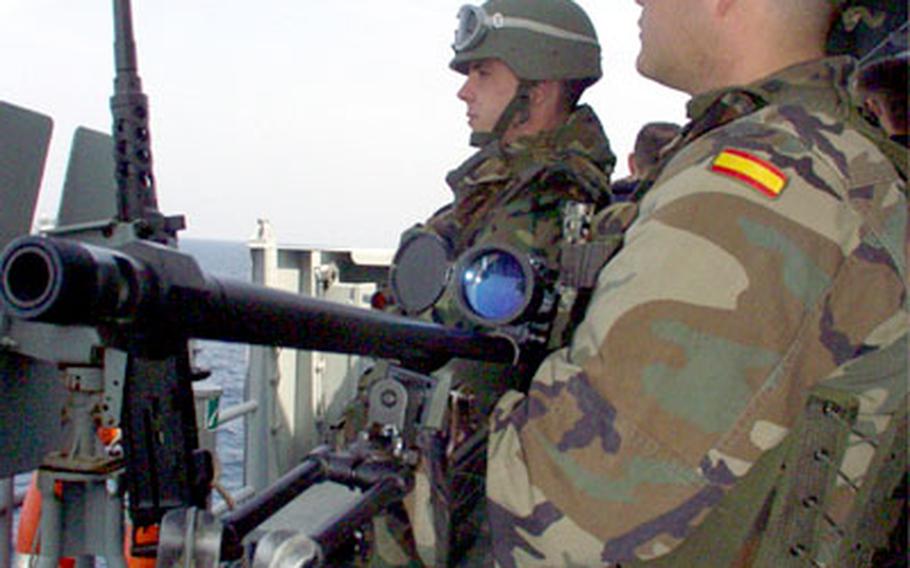 STRAIT OF GIBRALTAR &#8212; As the convoy of U.S. military cargo ships cruised through this chokepoint that splits two continents, an armada shadowed its every knot.

From the edge of the Atlantic Ocean to the western opening of the Mediterranean Sea, NATO helicopters hovered overhead as frigates guarded the perimeter, and a reconnaissance plane circled like a hawk high in the sky.

Most merchant ship captains welcome such escorts through the risky waterway.

American vessels like the three loaded Friday with military supplies for the Persian Gulf do not go through without it.

Traffic through the strait has increased dramatically because of the U.S. military buildup in the Middle East, leading NATO to take on the new mission of protecting allied civilian and military ships from terrorist attacks.

Ships, helicopters and planes from the United States, Spain and Portugal escorted the first ship on March 10.

The campaign is part of Operation Active Endeavour, NATO&#8217;s biggest and longest maritime operation in history. The patrol and surveillance mission in the eastern Mediterranean began 18 months ago to hunt terrorists.

Keeping the strait safe is crucial to supplying the estimated 250,000 troops massed in the Persian Gulf and poised for war. But the 8-mile-passage dividing Muslim Morocco and Catholic Spain is considered a prime location for a terrorist attack because of its geography.

Kamikazelike terrorist attacks by a clandestine boat or small propeller plane could be launched from Morocco or Spain and reach a warship in a matter of minutes.

Spanish Rear Adm. Manuel Otero Pa&#241;ueles, who is commanding the NATO task force in the strait, said guiding a convoy of ships while at the same time monitoring the other vessels in the harbor is a daily challenge that does not seem to get any easier.

The May 12 arrest of three suspected al-Qaida members in Morocco increased concerns about the potential danger in the channel.

Last month, a Moroccan court sentenced three Saudi Arabians to 10 years in prison on charges they planned to sail a dinghy loaded with explosives from Morocco into the Strait of Gibraltar to attack U.S. and British warships.

The alleged plot was similar to the attack on the USS Cole in October 2000, when terrorists in an explosive-laden rubber boat smashed into the destroyer as it refueled in Yemen, killing 17 sailors.

NATO air and naval forces want to prevent a similar strike, but commanders say they are doing it mostly through intelligence-gathering and presence.

Although they have not found any al-Qaida terrorists, they insist the broad operation in the Mediterranean is making it safer for allied civilian vessels.

Commanders point to a drop in insurance premiums for merchant ships transiting the sea. Plus, illegal immigration is down 50 percent in the Mediterranean since the main operation started.

&#8220;The simple fact that we are present in an area shows you that we exert a deterrence effect,&#8221; said Italian Vice Adm. Ferdinando Sanfelice di Monteforte, commander Allied Naval Forces Southern Europe.

&#8220;And we expect by this escort in the Strait of Gibraltar to continue to have a preventive effect.&#8221;

Operation Active Endeavour began Oct. 26, 2001, in response to the Sept. 11, 2001, terrorist attacks on the United States. Its primary aim was to patrol the Eastern Mediterranean, an area east of Sicily to west of the Suez Canal that has been a busy shipping lane for centuries.

However, as the United States began its buildup for a possible war against Iraq, the threat to ships in the Strait of Gibraltar became a bigger concern.

Those worries spawned the idea of sending NATO&#8217;s Standing Naval Force Atlantic &#8212; a group comprised of U.S., Portuguese and Spanish ships and aircraft &#8212; to begin the escorts.

Each ship that enters and leaves the strait is either watched or guided.

Allied ships first make radio contact with a merchant ship and ask who they are, where they are going and what they are carrying. It is like an interrogation by radio.

They then match it with the ship&#8217;s manifest. If there is a discrepancy, NATO commanders enter the information into an intelligence database. The U.S. Navy&#8217;s 6th Fleet, other countries operating in the area or customs officials can use that information to determine whether to board the ship for inspection.

Although NATO personnel are capable of boarding ships, they have not done so. Monteforte acknowledged that it is extremely difficult to catch terrorists by sea.

Every allied civilian or military ship is escorted the entire length of the strait.

On Friday, two armed helicopters, an American, Rota-based P-3 reconnaissance plane, a Spanish fast boat and a group of frigates &#8212; including the USS Halyburton &#8212; guided the trio of military cargo ships.

Aboard the Spanish frigate Numancia, Spanish sailors armed with assault and sniper rifles scanned the Moroccan coast, looking for threats.

Occasionally, the helicopters would swoop down between the convoy like pelicans searching for fish. The P-3, an aircraft used primarily during the Cold War to hunt submarines, made several passes to offer a bird&#8217;s-eye view.

The task force uses Naval Station Rota, which is north of the strait on the Atlantic Ocean side, as a home base to refuel and to give the crew an opportunity for some rest and relaxation.

The base can expect a NATO task force to be there for a while. Commanders predict a long-term mission.

&#8220;These operations last years, they do not last days,&#8221; Monteforte said. &#8220;To stabilize an area, to convince ship owners to abandon illegal practice, to enable the police to get rid of terrorist cells, it takes years and years.&#8221;