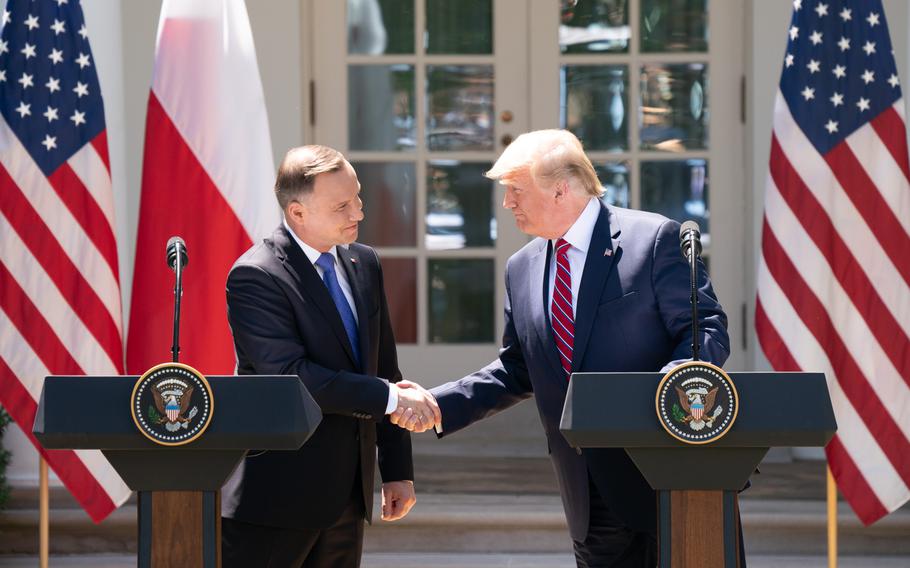 STUTTGART, Germany — NATO and Baltic officials welcomed a decision by President Donald Trump to boost the number of U.S. troops in Poland, but Berlin was mum in the wake of an announcement that included the possibility of pulling forces from Germany.

Trump on Wednesday differed from talking points about the plan, which a senior White House official told reporters Tuesday would involve a modest increase of 1,000 troops sent to Poland on a rotational basis to help with planning, surveillance and logistics.

Trump, during a meeting with Polish President Andrzej Duda, said the number could be as high as 2,000 and that he was considering relocating forces from Germany to accomplish the mission.

Despite the tough talk on Germany, which Trump has repeatedly blasted for weak defense spending, allies in Europe saw the plan for more troops in Poland as a positive sign.

“This shows the strong commitment of the US to European security & the strength of the transatlantic bond,” NATO Secretary-General Jens Stoltenberg said in a tweet following Wednesday’s announcement.

Others in the alliance had similar reactions. Baltic nations, once part of the Soviet Union, have been particularly concerned about Russia’s intentions since the 2014 invasion and annexation of Crimea, which was also a former Soviet territory.

“This is an important step and display of US commitment to European security and deterrence. Estonia wholeheartedly embraces this decision that goes to further strengthen the transatlantic bond and cooperation between NATO allies,” Estonian Foreign Minister Urmas Reinsalu said in a tweet.

Lithuanian Foreign Minister Linas Linkevicius echoed the viewpoint in a tweet, saying the decision contributes to the “Alliance’s deterrence and defense posture and benefiting the security of all NATO Allies.”

However, Trump’s threat to shift forces from Germany or another country to carry out the mission was left unaddressed by allies.

In Germany, there was no official response Thursday to Trump’s comments. Underscoring the differences between Washington and Berlin, one day ahead of Trump’s Poland announcement, Germany Foreign Minister Heiko Maas was in Tehran trying to salvage a nuclear deal with Iran that the U.S. withdrew from.

While not addressing Trump’s threat to transfer troops out of Germany, head of the country’s conservative Christian Democratic Union party, Annegret Kramp-Karrenbauer, said Wednesday that Trump’s complaints about German defense spending are valid.

“It is about mutual trust. It is also about the question if Germany is a responsible partner,” Kramp-Karrenbauer said at the German-American conference in Berlin.

In Germany, however, there is a lack of political consensus about ramping up defense spending.

Trump on Wednesday emphasized that the U.S. will not add more forces in Europe but will relocate them from other places. Details on the deployments are being determined.

“We haven’t totally made up a decision,” Trump said.

However, Trump linked coming troop increases in Poland to Warsaw’s efforts to elevate defense expenditures to NATO’s benchmark, which calls for dedicating 2% of gross domestic product to military spending.

The issue is a top NATO priority for Trump. Germany was singled out by Trump for falling short.

“Germany is not living up to what they’re supposed to be doing with respect to NATO and Poland is,” Trump said.

Trump added that Poland would build a new facility to accommodate more U.S. troops in the country, but he demurred when asked whether it would be named “Fort Trump” as Poland offered when it proposed the idea last year.

“No, that’s up to them. They can name it whatever they want,” Trump said.