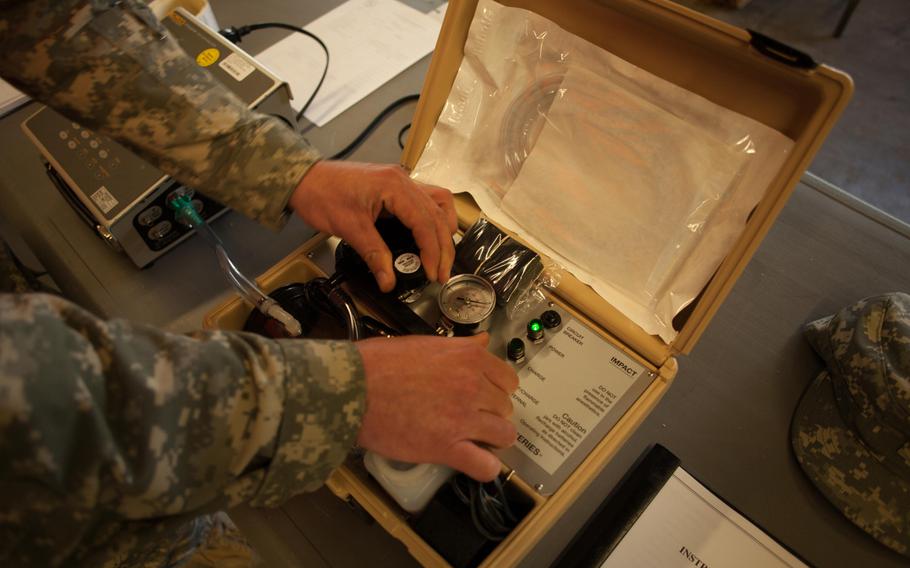 Spc. Christopher Hill of the U.S. Army Medical Materiel Center, Europe, runs a diagnostic test on a suction machine for delivery to Afghan forces. NATO purchased 325 ambulance kits to supply Afghan soldiers and police ahead of the fighting season. (Matt Millham/Stars and Stripes)

Spc. Christopher Hill of the U.S. Army Medical Materiel Center, Europe, runs a diagnostic test on a suction machine for delivery to Afghan forces. NATO purchased 325 ambulance kits to supply Afghan soldiers and police ahead of the fighting season. (Matt Millham/Stars and Stripes) 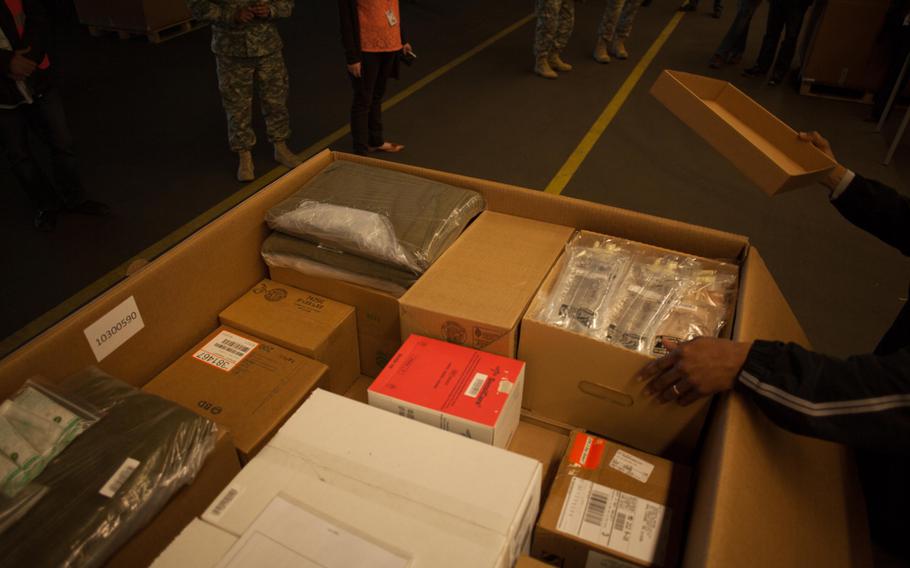 A civilian worker at the U.S. Army Medical Materiel Center, Europe, in Pirmasens, Germany, shows some of the supplies contained in the ambulance kits NATO has bought to supply Afghan forces. Items that are too big to fit in the box or hazardous are packed separately. (Matt Millham/Stars and Stripes) 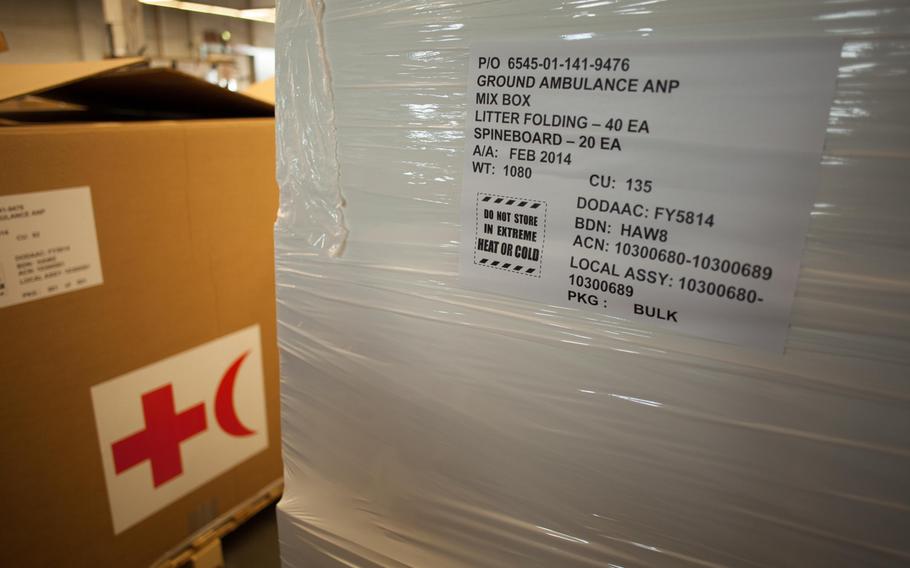 Litters and spine boards purchased for Afghan forces sit in a warehouse in Germany. NATO purchased $6.3 million worth of ambulance kits to outfit Afghan police and soldiers ahead of this years fighting season - the last for western forces in Afghanistan. (Matt Millham/Stars and Stripes) 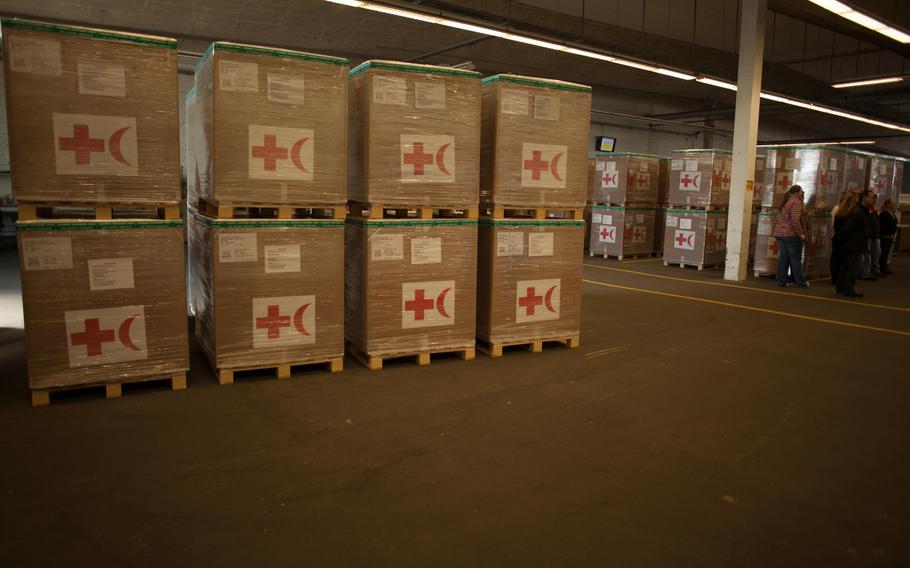 More than 100 boxes of medical supplies sit in a warehouse in Germany awaiting shipment to Afghan forces. The U.S. Army Medical Materiel Center, Europe, in Pirmasens, Germany, procured the supplies on a tight deadline so they could get to Afghanistan in time for an expected uptick in violence later in the spring. (Matt Millham/Stars and Stripes)

PIRMASENS, Germany — With fewer Western forces on the ground to backstop Afghan troops, the U.S. and NATO are rushing medical supplies to Afghanistan’s police and army in anticipation of a violent fighting season.

The kits contain roughly the same equipment found on U.S. Army ground ambulances, such as spine boards and intravenous fluids. The coalition has largely favored helicopters over ground evacuation in Afghanistan. For the most part, though, Afghan forces won’t have that kind of air support once the coalition leaves.

Afghans are still developing their casualty evacuation system, said Air Force Col. Maria Guevara, NTM-A’s command surgeon. While they have a small fleet of helicopters that can be used for aerial MEDEVAC, “most of their movement is going to be by ground,” she said.

The ambulance kits, which include supplies to outfit the variety of ambulances that have been donated to Afghan forces over the past few years, are likely to be the last major purchase of medical supplies that NATO makes for Afghan troops, Guevara said. Afghan forces will now be expected to procure their own supplies.

She said that the Afghan army and police are still learning the basics of running their supply systems.

“They’re working on it — on how to identify their consumption rates, their fill rates,” Guevara said. “And they’re also working on their distribution process.”

Even for the U.S. Army, which has vast experience in this arena, it was a challenge getting the supplies to Afghanistan on NATO’s tight deadline.

U.S. Army Medical Materiel Center, Europe — the primary supplier of medical supplies for all military hospitals and operations in Europe, Africa and Afghanistan — typically takes four to six months to fill orders, and most aren’t as large as what NATO asked for, said Lt. Col. Sean McMurry, chief of USAMMCE’s materiel management division.

With this order, NATO wanted $6.3 million worth of supplies delivered in less than two months.

While the center is well-stocked for contingencies, it didn’t have on hand many of the items NATO asked for, such as suction machines and splints, or in the quantity needed.

The center scraped the supplies together with help from other military agencies in Europe and the U.S. and its civilian suppliers, some of which had to restart production lines to fill the order, McMurry said.

A critical shortage of intravenous fluids caused by production disruptions at three major U.S. manufacturers nearly derailed the entire project. Both saline and lactated Ringer’s solution — items that are essential to treat the type of wounds that are common in combat — are essentially being rationed in the U.S.

Because the fluids were bound for Afghan and not American forces, USAMMCE was authorized to buy non-FDA-approved fluids from a British manufacturer in order to get the kits to Afghanistan before the spring fighting season.

“Had we not gone to the UK for that, we probably would still be sitting here today waiting to pack boxes,” McMurry said.

The first batch of 60 kits shipped out on March 10; the last sets were being handed over to Afghan forces last week, Guevara said.