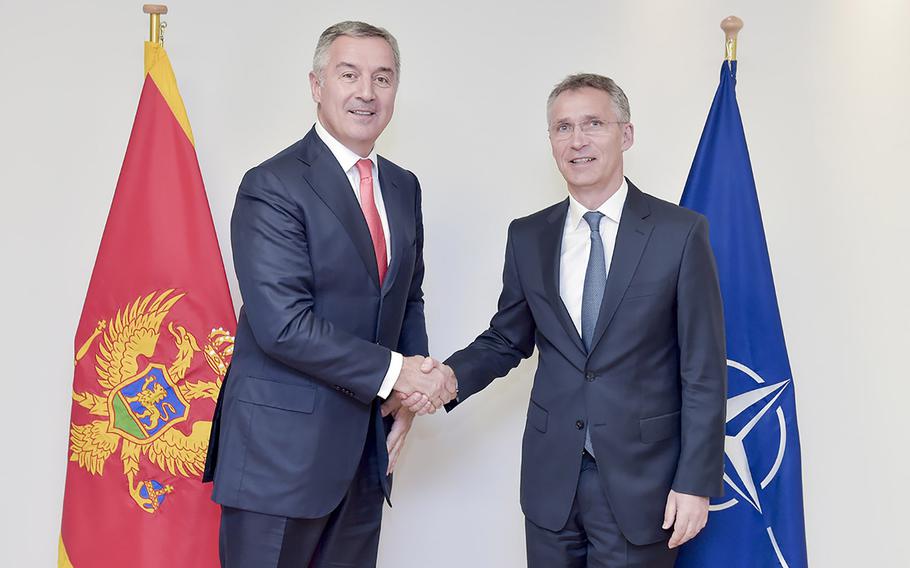 NATO took a key step on Thursday toward adding the tiny Balkan nation of Montenegro as its 29th member, a move that officials say demonstrates the trans-Atlantic alliance’s commitment to further expansion despite Russian opposition.

NATO Secretary-General Jens Stoltenberg described the formal invitation to Montenegro to join the alliance as “a historic occasion.”

“It is a clear sign that NATO’s door remains open,” he said. “Montenegro is showing that it is possible.”

During a ceremony at NATO headquarters in Brussels, Montenegrin Prime Minister Milo Djukanovic and the foreign ministers of all 28 member nations signed an accession accord — a crucial step in the process of joining the alliance.

The legislatures of all member states, including the U.S. Senate, must ratify the agreement before Montenegro can become a full alliance member. The process is expected to take at least a year.

Stoltenberg said that from now on Montenegrin representatives will be able to attend all NATO meetings as observers.

Since 1999, the alliance has accepted 12 new east European members, not counting Montenegro.

Russia has vehemently criticized the alliance’s eastern expansion — which includes members of the former Soviet Union’s Warsaw Pact military alliance — viewing it as a potential military threat to its own borders.

Analysts see several other countries, including Bosnia-Herzegovina, Macedonia and the former Soviet republics of Georgia and Ukraine as potential future members.

But some NATO governments have strongly resisted further enlargement as unnecessarily antagonizing Moscow.

In that sense, Montenegro — with a population of about 630,000 and military of just 2,000 troops — is a fairly safe addition to the alliance. It is located about as far from Russia as geographically possible in eastern Europe, and as a state of the former Yugoslav federation, it was never part of the Warsaw Pact. Yugoslavia was associated with NATO in the 1950s and 60s, through its defense pact with Greece and Turkey, both members of the Western alliance.

Montenegro, located opposite Italy on the southern Adriatic coast, gained independence a decade ago when its confederal arrangement with neighboring Serbia collapsed. With an economy mainly based on tourism, the country is also a leading candidate for membership in the European Union.

“This event today proves that Montenegro chose well a decade ago” when it opted for independence, Djukanovic said.

Opposition parties in parliament have called for a referendum on NATO membership, arguing that public opinion polls show that less than half of respondents support joining any military alliance.