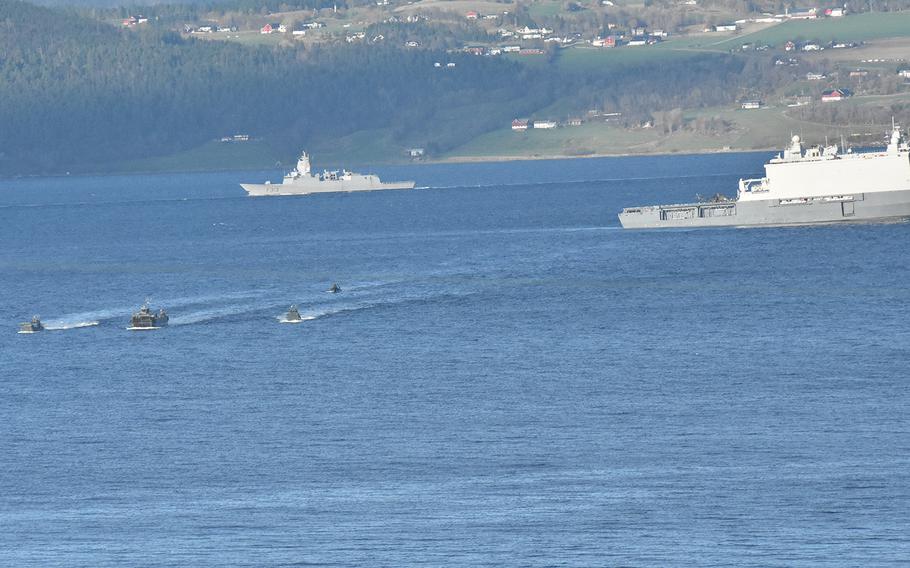 Frigates stand vigil while three amphibious assault vessels zoom toward shore during a large-scale drill on Oct. 30, 2018, as part of Trident Juncture, the largest NATO war games since the Cold War. (Scott Wyland/Stars and Stripes)

Frigates stand vigil while three amphibious assault vessels zoom toward shore during a large-scale drill on Oct. 30, 2018, as part of Trident Juncture, the largest NATO war games since the Cold War. (Scott Wyland/Stars and Stripes) 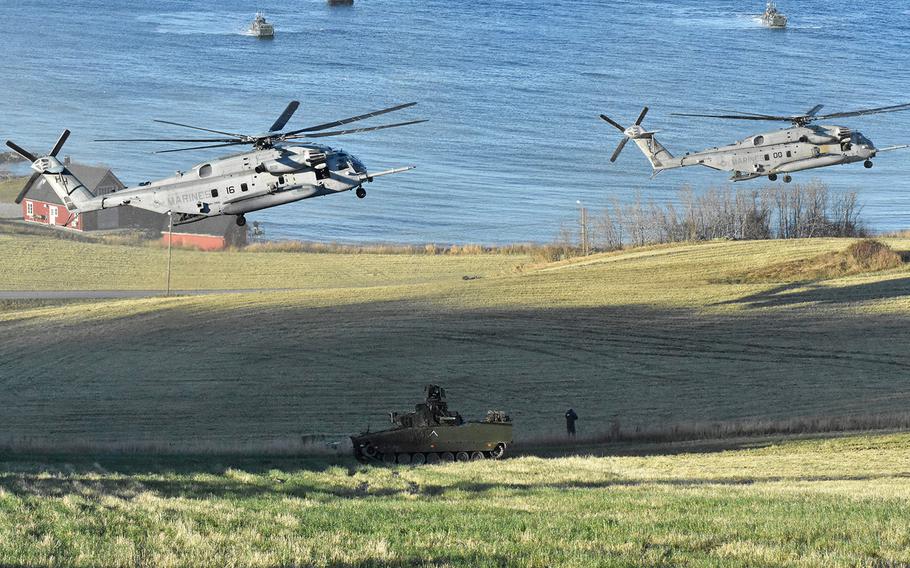 Helicopters hover over a simulated assault in a defense of a Norwegian coastal area on Oct. 30, 2018, during the NATO exercise Trident Juncture. All 29 NATO members plus Sweden and Finland participating in the largest allied war games since the Cold War. (Scott Wyland/Stars and Stripes) Seven frigates took part in a demonstration on Oct. 31, 2018, of how NATO's land, sea and air forces would work together to defend a Norwegian coastal area. The drill was part of Trident Juncture, which had more than 50,000 personnel participating. (Scott Wyland/Stars and Stripes) Marines secure the area after making an amphibious landing as part of a NATO demonstration on Oct. 30, 2018. The large-scale drill was one of many being conducted during Trident Juncture, NATO's largest war games since the Cold War. (Scott wyland/Stars and Stripes) 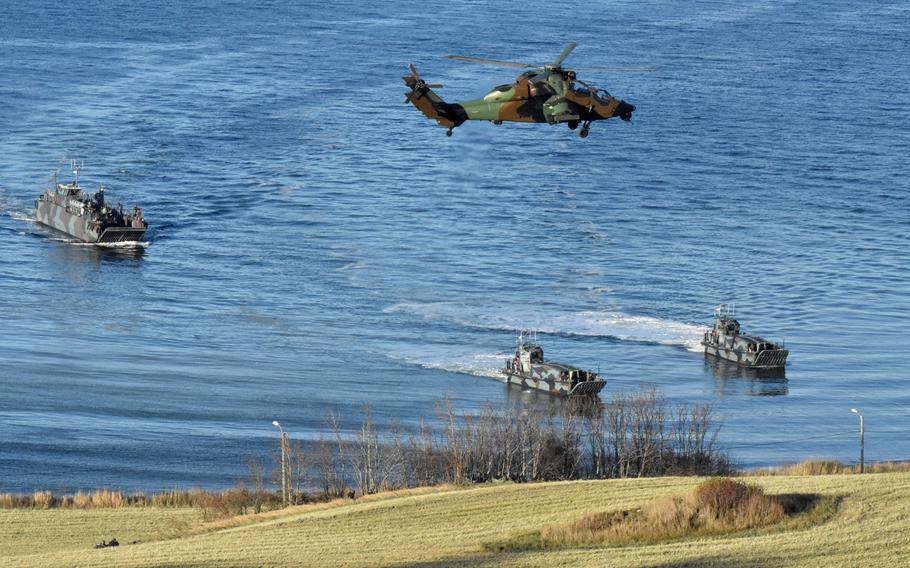 A simulated amphibious assault was part of a mock defense of a Norwegian coastal area on Oct. 31, 2018, giving NATO a chance to showcase it air, land and sea defenses during the Trident Juncture exercise. (Scott Wyland/Stars and Stripes) A simulated mine detonation clears the way for an amphibious landing on Oct. 30, 2018, as part of a demonstration during Trident Juncture of how NATO's air, land and sea forces would defend a Norwegian coastal area. (Scott Wyland/Stars and Stripes) 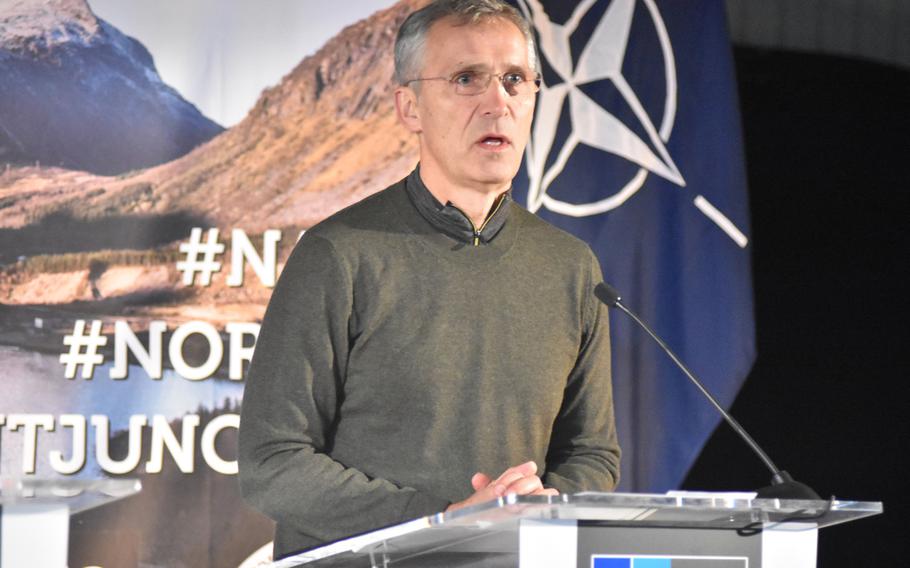 NATO Secretary-General Jens Stoltenberg addresses questions at a Trident Juncture exercise press conference on Oct. 30, 2018 outside Trondheim, Norway, before a demonstration of NATO's land, air and sea forces. Trident Juncture is the largest NATO exercise since the Cold War ended, with an estimated 50,000 personnel participating. (Scott Wyland/Stars and Stripes)

TRONDHEIM, Norway — NATO on Tuesday showcased how its land, sea and air forces would respond to an adversary that invades an alliance member — a thinly veiled reference to the threat posed by neighboring Russia.

The military demonstration at a wind-blown waterfront site near Trondheim was part of the massive, two-week Trident Juncture exercise and displayed the allies’ combined firepower to NATO dignitaries, foreign observers and the international media.

Military officials have stated that the exercise is not targeting any one country. But the fictitious scenario involves repelling a “near-peer” threat in Europe. NATO has been reassuring its allies in Eastern Europe against potential threats posed by Russia, whose military has grown more assertive since it annexed Ukraine’s Crimean Peninsula in 2014.

Last week, Moscow informed NATO that it plans to conduct a missile test in the North Atlantic, in the vicinity of where much of Trident Juncture is taking place. That announcement comes following Russia’s largest war games since the 1980s, together with China and Mongolia, as part of the Vostok-18 drills in eastern Siberia and the Far East in September.

NATO Secretary-General Jens Stoltenberg told reporters Tuesday that the missile test is no call for alarm and he expects Russia to conduct itself safely and professionally. It’s important to coexist peacefully with Russia, he said.

Trident Juncture is a defensive exercise aimed at preparing and testing allies’ teamwork in the face of a crisis, he added.

Tuesday’s well-orchestrated drills offered observers a glimpse of the 50,000 personnel, 65 warships and 250 aircraft participating in NATO’s largest war games since the end of the Cold War.

Fighter jets roared overhead and a phalanx of frigates kept vigil in a fjord while Marines made a simulated amphibious assault on a rural shoreline.

“We train to send a clear message to our own nations and to anyone who might want to challenge us,” Stoltenberg said. “NATO is ready and NATO is able to protect all our allies against any threat.”

All 29 NATO countries, along with partners Sweden and Finland, are taking part in the exercise. The U.S. is the largest participant, with more than 14,000 servicemembers from the Army, Air Force, Navy and Marine Corps.