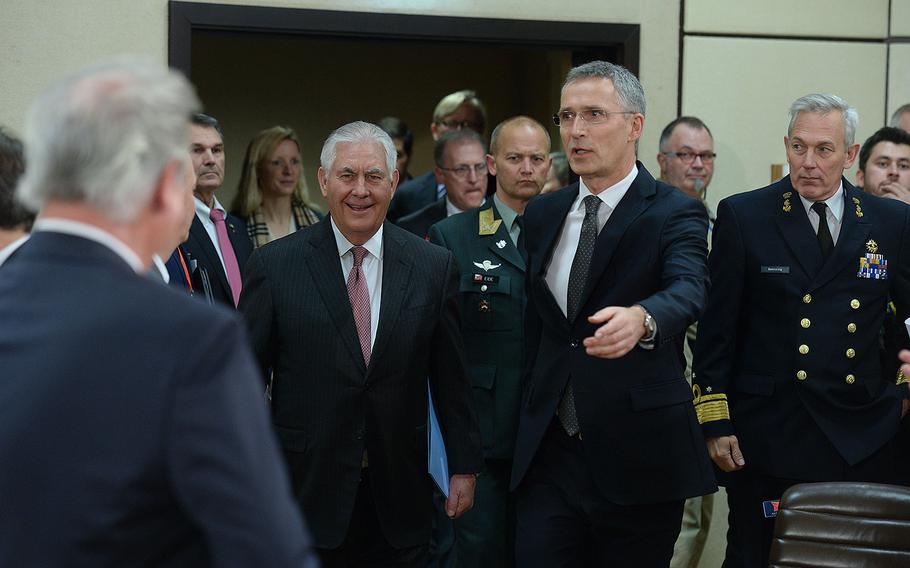 The U.S.-led NATO alliance and European Union endorsed a plan Tuesday to make military mobility across Europe a top priority, but terms on how to ensure convoys of American troops can quickly cross national borders still need to be worked out, officials said.

U.S. military leaders have emphasized the need to ease customs regulations and bolster infrastructure along NATO’s eastern flank to ensure tank convoys and military hardware can maneuver with speed in a crisis.

As the United States has beefed up operations in countries such as Poland and the Baltic states, soldiers have taken part in numerous convoys stretching up and down the length of NATO’s eastern boundaries. Often, it has resulted in logjams during border crossings.

U.S. Secretary of State Rex Tillerson, upon arriving at NATO headquarters Tuesday, said closer cooperation between NATO and the EU “can only strengthen the security posture in Europe.”

NATO and the EU are now looking for ways to create more bureaucratic uniformity that would remove obstacles that slow convoys.

“Moving our forces and equipment quickly is vital for our security. This means we need procedures for rapid border crossing,” Stoltenberg said.

In addition, NATO and Europe have agreed infrastructure, particularly in NATO’s east, needs to be capable of handling heavy military vehicles.

During the Cold War, standards among allies ensured roads, railways and tunnels could manage big military convoys. But at the end of the Cold War, when tensions with Russia eased and former Warsaw Pact states entered the alliance, ensuring infrastructure in the east was up to western military standards wasn’t a top priority. During the post-Cold War era, some infrastructure also was privatized, which means allies now must negotiate with businesses such as Germany’s rail company to ensure access to lines for transport.

During the past year, NATO has forged closer ties with the EU on a range of security matters including cyber threats and migration issues.

“The U.S. no longer sees the world as a global community, but as a fighting arena where everyone has to seek their own advantage,” Gabriel said.