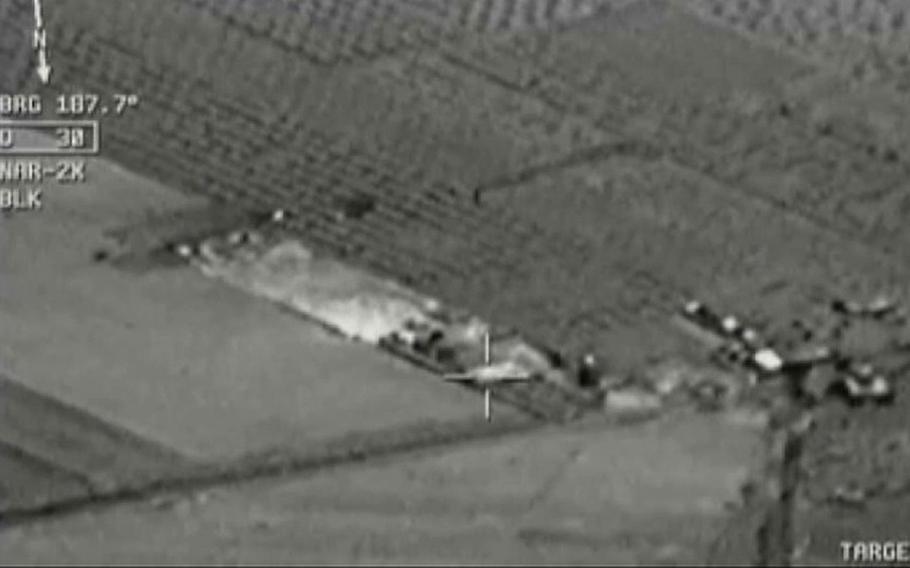 Image from aircraft cockpit video released by Turkey's state-run agency Anadolu Friday, July 24, 2015, of what they report to be Turkish warplanes striking Islamic State group targets across the border in Syria. Black object at centre above target is bomb shortly before impact. Earlier a government official said three F-16 jets took off from Diyarbakir airbase in southeast Turkey early Friday and used smart bombs to hit three IS targets across the Turkish border province from Kilis. The official, who spoke on condition of anonymity because of government rules requiring prior authorisation for comment, said the targets were two command centres and a gathering point of IS supporters. The official said the Turkish planes had not violated Syrian airspace. (Anadolu via AP Video)

STUTTGART, Germany — NATO will meet Tuesday in an emergency session ordered by ally Turkey, where recent attacks by the Islamic State group have pushed the fight into alliance territory and prompted vows by Ankara to play a larger role in the battle against the militants.

The North Atlantic Council, which includes the ambassadors of all 28 NATO members, will convene in Brussels under the alliance’s Article 4 — a rarely utilized part of NATO’s founding treaty that allows a member to request consultations if it considers its territory or security has been threatened.

“Turkey requested the meeting in view of the seriousness of the situation after the heinous terrorist attacks in recent days, and also to inform Allies of the measures it is taking,” NATO said. “NATO Allies follow developments very closely and stand in solidarity with Turkey.”

Unlike Article 5 of the treaty — which requires members to come to the assistance of alliance nations subject to armed aggression — Article 4 merely calls for talks. The former was first invoked by Turkey in 2003, when tensions escalated ahead of the U.S.-led invasion of Iraq; it was invoked again in 2012 when Syrian air defenses shot down a Turkish jet and when errant shelling from Syria killed five civilians on the Turkish side of the border.

In response to Turkish concerns at the time, NATO agreed to bolster air defenses along the country’s southern border with Syria, but the alliance avoided overt military action because there is little appetite among most members for another war in the Middle East.

The United States, along with two other NATO states, continue to provide such support with hundreds of troops forward-deployed in Turkey, armed with Patriot missiles that guard the country’s airspace. To date, NATO has not been required to fire a single missile in Turkey’s defense.

For the past three years, Turkey’s primary regional concern has been the Assad regime in Syria, which has been engaged in a lengthy civil war against various groups, including the Islamic State, militants affiliated with al-Qaida and other extremist organizations. Critics of Ankara have accused Turkey of turning a blind eye to the rise of the Islamic State, which has relied on Turkey as a main transit route into war-torn Syria.

However, the recent attacks along Turkey’s border, which included a suicide bombing in the Turkish town of Suruc and crossfire along the border between Turkish troops and militants, has marked a major shift in Ankara’s policy.

Last week, Turkish President Recep Tayyip Erdogan announced that the U.S. would now be able to utilize the strategic Incirlik Air Base for attacks on the Islamic State. The base is only about 250 miles from the militant group’s self-proclaimed capital of Raqqa, Syria, well within quick-strike distance for U.S. fighters and armed drones. Until now, Turkey has allowed only unarmed drones to operate from Incirlik.

Turkey itself also joined the fight last week, sending its own fighter bombers to conduct airstrikes against Islamic State targets.

While the use of Incirlik will help increase the operational tempo for the U.S.-led air campaign, which has so far relied on more distant bases to launch strikes, Turkey’s entrance into the fight could prove even more consequential over the long haul, according to some experts.

“(S)hould Turkey commit its sizable military and regional political might to the destruction of the Islamic State — while still pushing for Assad’s defeat — the fight will have truly reached a turning point that might lead to something other than another turning point,” said the Soufan Group, a New York-based security services firm.