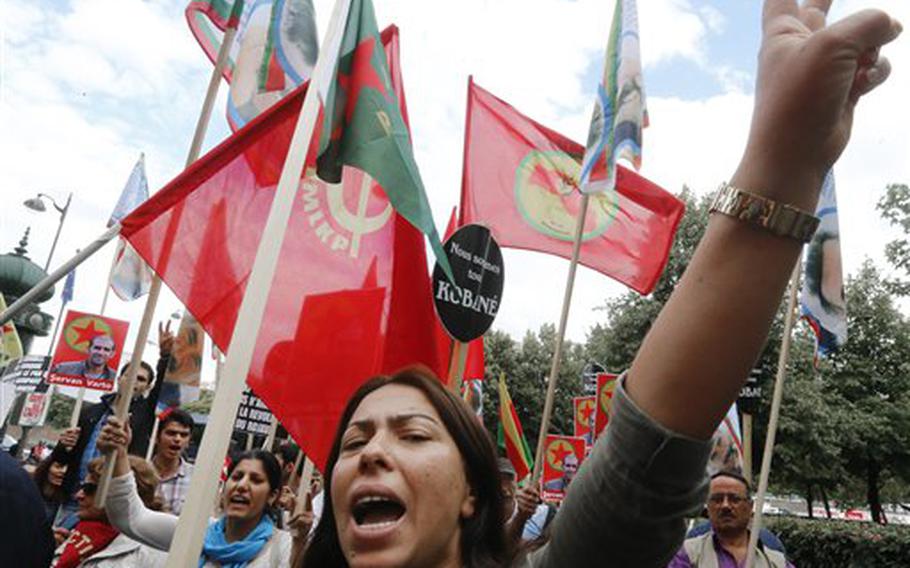 Kurdish demonstrators protest near Turkish Embassy in Paris, France, Monday, July 27, 2015, denouncing the deaths of 32 people in a suicide bombing last Monday, in Suruc, southeastern Turkey. Turkish warplanes struck Islamic State group targets across the border in Syria early Friday, in a strong tactical shift for Turkey which had long been reluctant to join the U.S.-led coalition against the extremist group. (Jacques Brinon/AP)

Diplomats from the 28-nation NATO alliance took no formal steps to bolster support for member state Turkey after concluding an emergency session on Wednesday that Ankara requested in response to recent attacks by the Islamic State on Turkish soil.

Secretary-General Jens Stoltenberg, speaking at the talks at the alliance’s headquarters in Brussels, said the NATO has been observing hostilities along its southern flank with growing concern.

“Turkey has requested this meeting due to the serious security situation,” he said at the start of the session. “It is right to hold this meeting today to address the instability on Turkey’s doorstep and on NATO’s border. NATO is following developments very closely, and we stand in strong solidarity with our ally Turkey.”

Under Article 4 of NATO’s founding treaty, any member state can request an emergency session of the North Atlantic Council — the alliance’s ruling body — if it considers its territory or security to be under threat. While NATO is not required to take concrete measures in response to such a request, Article 4 hearings can generate military responses, such as in early 2013 when the alliance deployed Patriot missiles to southern Turkey to bolster the country’s air defenses.

After a little more than an hour of discussions by assembled ambassadors, NATO issued a statement saying that it stands in solidarity with Turkey, but it did not announce any formal alliance role in the fight against the Islamic State.

Moreover, Turkey made no request for additional support, Stoltenberg said.

“Turkey didn’t ask for any additional NATO military presence in Turkey,” Stoltenberg said after the meeting. “Turkey has a very capable armed forces, the second-largest army in the alliance,” he added.

The meeting in Brussels came after last week’s suicide bombing in Turkey’s border town of Suruc in which 32 people died and scores were injured. Authorities blamed the attack on the Islamic State group, which has occupied large swaths of neighboring Syria and Iraq.

Turkey announced last week it would begin airstrikes against militants inside Syria. Ankara also said it would allow U.S. forces to conduct strikes from the strategic Incirlik Air Base, something that Turkey has thus far resisted. The moves are expected to increase the operational tempo for the U.S.-led air campaign, which can now conduct strikes from the Syrian border rather than flying in from distant bases in the Persian Gulf.

NATO’s consultations also come as the U.S. and Turkey move forward with plans to create a buffer zone free of Islamic State fighters along a section of Turkey’s border with Syria.

Turkish and U.S. officials have said that details of the scheme still need to be worked out but that the aim is to set up a strip of territory that could potentially function as a haven for Syrians who have been displaced form their homes after years of fighting.

There are no plans to send in U.S. or Turkish ground forces, but Turkish officials have indicated that the operations could provide air support for moderate Syrian rebels, who would function as something of a ground force in the battle against militants.

Turkish Prime Minister Ahmet Davutoglu, speaking on national television, said that the goal was for those moderate fighters to take up the positions now held by Islamic State fighters on the border.

For the United States, Turkey’s entrance into the fight against the Islamic State is long-awaited. Turkey’s previous reluctance to join military operations against militants has been a source of frustration for many in the West, who have also been critical of Turkey’s tacit willingness to tolerate Islamic militants to transit the country en route to Syria and Iraq.

Turkey’s decision to now join the effort has been widely hailed as a turning point. Still, Its military role also brings attention to the complex sectarian divisions that fuel so much of the tension in the region.

While Turkey has been conducting strikes against Islamic State targets, it also has moved on Kurdish separatists associated with the Kurdistan Workers Party, a terrorist group also known as the PKK. While that group is among those fighting against the Islamic State, it also is Turkey’s Number 1 enemy.

U.S.-backed Kurdish fighters, who include PKK members, have been a key part of ground operations against the Islamic State. If Turkey continues to attack PKK fighters, it raises the prospect that other Kurdish groups will turn away from the fight against Islamic State, some experts say.

“If Turkish strikes in Iraqi Kurdistan distract ground forces from the anti-ISIS fight near Mosul and Kirkuk, it will undermine the anti-ISIS fight there,” the Institute for the Study of War reported in an analysis of Turkey’s new role. ISIS is an alternative name for the Islamic State.

“It is nevertheless possible that Iraqi Kurds will choose not support the PKK against Turkish strikes, accepting Turkey as the greater anti-ISIS contributor,” the institute said.